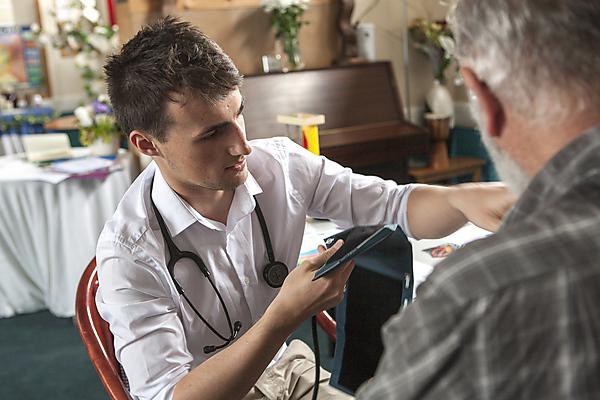 Year three medical students at Plymouth University Peninsula Schools of Medicine and Dentistry have worked with residents and staff of the Salvation Army’s Devonport Lifehouse to create a ‘health corner’ to benefit the health and wellbeing of residents.

Three groups of medical students worked with Devonport Lifehouse. The first discussed the idea with two local GPs involved in the medical school – Professor Hilary Neve and Dr Richard Ayres – and then arranged a barbecue at Devonport Lifehouse to find out what health issues concerned the residents and what was most important to them.

The second group took the findings of the first and created a temporary health corner at Devonport Lifehouse. Here they spent a morning measuring blood pressure and body mass index (BMI), and talking to residents about their health and collecting feedback. The measurements were recorded on individual 'My Health MoT' sheets for residents to take to their GP.

The third group acted on the feedback from the second and ran a similar session focusing on what could work in a permanent health corner, development of which will happen in the next year.

“Before we went to Devonport House we had lots of ideas of what we could bring to the people there. However after we visited and spoke to the residents, we found out that what they wanted was in fact very different to what we had had in mind. This highlighted the importance of gathering feedback. At first, we were naïve to what they might have wanted, such as a check-ups for diabetes or BMI. But after speaking to many of the residents at Devonport House, we found out they have much more specific health requests, such as Hepatitis C and HIV testing, contraceptive advice, malnutrition advice and mental health services.”

The project is part of the new social engagement programme which sees third year medical students undertake a number of projects in partnership with community organisations designed to raise health awareness and to improve their understanding of social responsibility. The programme is delivered by the Community Engagement Team at the Peninsula Dental Social Enterprise.

Lyndsey Withers, who oversaw the project from the Devonport Lifehouse perspective, commented:

“It was really beneficial for our residents to have this quality of experience with medical students. When the students spoke to our residents it became apparent that they really wanted to take come control over their health, but felt they did not know how to go about doing that and did not always have the confidence to take the initiative. By working with our residents the students are in the process of creating a very useful and accessible facility in the health corner.”

“It is important for our students to learn in the context of the communities they will go on to serve when qualified, which is why we are grateful to Lyndsey and residents and staff at Devonport Lifehouse for this opportunity.”