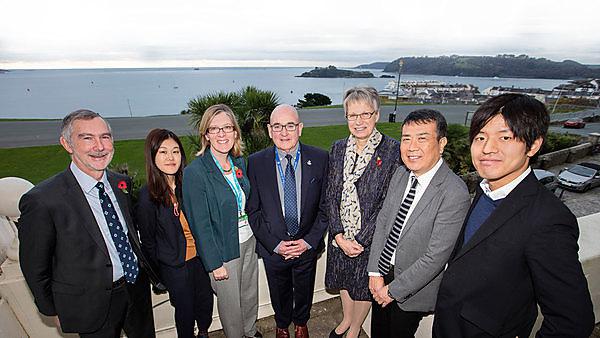 Plymouth’s pioneering work to tackle dementia was in the global spotlight when Japanese media accompanied a delegation from Japan visiting the city.

Journalists from Japanese national newspaper Asahi Shimbun and a representative from the Asahi Social Welfare Organisation visited Plymouth to report back to Japan on the wide-ranging dementia-friendly initiatives in and around the city which have earned it an international reputation for world-leading dementia-friendliness.

After meeting Jeremy Hughes, Chief Executive of Alzheimer’s Society on a visit to Kobe, they were interested in the dementia-friendly communities work happening across the UK with a particular interest in government, hospitals, volunteering, and business.

The two-day visit to Plymouth - one of the first dementia-friendly cities in the world - including the work of the Plymouth Dementia Action Alliance (PDAA), a partnership between Plymouth University, Plymouth City Council, Devon and Cornwall Police, the local health service and a range of other partners – was a highlight of their trip to the UK.

They also found out what it means to be a carer in a dementia-friendly city, how Memory Matters is developing a city centre café and dementia information hub, and the role of dental health in dementia. At present, there are over 3,000 people with a diagnosis of dementia, living in Plymouth and this figure is predicted to rise to approximately 3,667 by 2020.

The Japanese visitors were then transported by Plymouth Citybus and taken to television studios at Plymouth University, from which they broadcast live to Japan about what they had learned.

From there the visitors went to Plymouth Central Library to find out more about its dementia-friendly groups and facilities, before travelling to Green Acres Care Home in Compton and then the Memory Service at Mount Gould Hospital.

On the second day the Japanese delegation met with Oliver Colvile MP, who hosted a discussion about dementia-friendly communities in his constituency office.

The visit to Plymouth was the result of several years’ work between Ian Sherriff, Academic Partnership Lead for Dementia at Plymouth University, Chair of the Prime Minister’s Rural Dementia and the Dementia Air-Transport groups, Chair of Plymouth Dementia Action Alliance and an Alzheimer’s Society Ambassador, and Professor Satoko Hotta from Japan. Ian said:

“I was delighted to welcome our colleagues from Japan to Plymouth. We have built a reputation for excellence in dementia-friendliness and it is good to see that this reputation is having impact internationally. My thanks also go to my colleagues from across the city and beyond who contributed to making this visit such a success.”

“The University is proud to draw on its research strengths - not least in medicine and health and human sciences - to make a positive contribution to dementia education, care and treatment and to supporting Plymouth City as a dementia friendly city.”

“It was a real pleasure to meet and hear from our Japanese visitors. The visit underlined the fact that dementia is a worldwide issue. We have a common desire to see further co-operation to share our experiences which hopefully will boost research which one day will see a cure for this debilitating condition.”