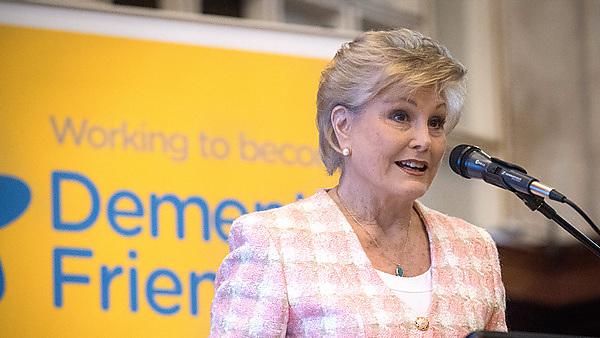 The 6th Plymouth Dementia Conference has drawn to a close and attracted an international line-up of contributors – and record numbers of more than 550 attendees.

Chaired by Angela Rippon CBE and organised by Ian Sherriff, Academic Partnership Lead for Dementia at the University of Plymouth and Chair of the Prime Minister’s Rural Dementia Friendly Task and Finish Group, the conference drew contributions from dementia experts from China, Macau, Japan, Italy, The Netherlands, Ireland and the UK.

More than 550 delegates attended and there were over 50 exhibitors.

“This year’s conference was a huge success and my thanks and congratulations go to everyone involved. We could truly claim to be an international conference on dementia this year and we have been able to form and strengthen existing and new ties with colleagues overseas in a bid to find global solutions to this most pernicious and distressing conditions.”

“The feedback we received was superb, ranging from ‘excellent’ to ‘over the moon’. It is all too easy to dismiss dementia as an issue we will never solve, and with an anticipated increase in the number of cases of 156 per cent between now and 2051 it would be all too easy to do so. But if the last six years has shown us nothing else, by chipping away at the problem in the laboratory, the clinic and society we are in a better position than we have been in the past – notwithstanding there is still an awful lot more to do. At the University of Plymouth we are taking a lead in all three of those areas. We have scientists in our laboratories who are striving to understand the mechanisms of dementia, so that new drugs can be found or existing drugs repurposed to stop the disease or slow its progression. As such, we are lead institution for the Alzheimer’s Research UK South West Research Network.”

During the conference Professor George Giarchi, Emeritus Professor at the University of Plymouth, was presented with an award by Ian Sherriff for all his support and dedication to the world of dementia.

Dementia at the University of Plymouth