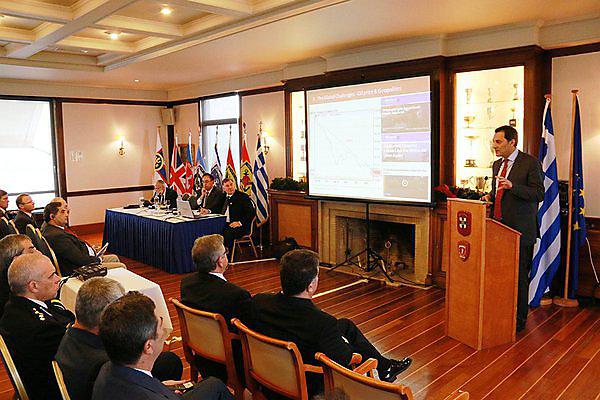 Experts from across the European strategy and security community have gathered for an international conference focused on issues in the Mediterranean.

High-ranking NATO officials, ambassadors and military attaches gathered for ‘The Case of Eastern Mediterranean Region’, held in Piraeus, Greece. Organised by the Dartmouth Centre for Sea Power and Strategy within Plymouth University, and its partner the Hellenic National Defence College, the event covered a range of issues including Russia’s role in the Syrian conflict.

The four keynote speakers of the conference also examined the contemporary security threats and the geopolitical equilibrium in the Mediterranean, and the challenges and opportunities in the fields of energy economics and security.

Dr Fotios Moustakis, Director of the DCSS, and co-organiser of the event, said:

“The conference was a major success and drew a very high-profile audience from the security and strategy fields. With increased instability in the Mediterranean, due to the Syrian crisis, Russia’s engagement in the conflict and its increasingly aggressive stance towards Turkey, it provided a very timely opportunity to assess the many factors at play in the region.”

About the Dartmouth Centre for Seapower and Strategy