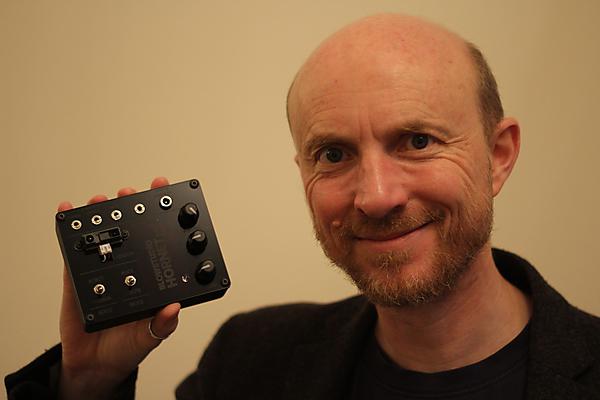 A Plymouth University lecturer has constructed a unique, portable digital instrument that he hopes ‘will enable everyone to have access to music-making’.

Dr Mike Blow, a sonic artist and lecturer in interactive media, has designed and manufactured a device called the Hornet, a small digital box which creates a variety of synthesiser sounds in response to the user’s hand motion.

The Hornet is a type of theremin – a musical instrument that can be played by moving a hand above it in space, and uses the same method of gestural control as the original theremin, an instrument designed by Russian inventor Lev Termen in the early 1900s. However the Hornet is digital and updates the idea with more sound options and possibilities.

Thanks to years of work through his creative practice, Blowstudio, Dr Blow has made boutique, expensive theremins before. But now with the Hornet, he says he has made an affordable device while keeping the great playability and sounds of the previous versions.

Dr Blow, who lectures on the BA (Hons) Digital Art and Technology course, has successfully funded the first production run through a Crowdfunding campaign, and now wants to make the Hornet available to everyone, from professional musicians to young children.

“It’s small, it’s light and can go with any kind of music – all the user needs to do is move their hand. Developed over several years of building and playing different versions, the Hornet is really fun for jamming and a great live performance instrument. It’s perfect for improvisers, electronic and experimental musicians, but anyone can play them, and kids love them. I’m delighted that I now have the chance to share the invention more widely, and hope that more people would be encouraged to take up music as a result. Music should be something to be enjoyed by everyone, and hopefully I’ve gone some way to making music-making more accessible.”

A hand-sized metal box with a Perspex top, every Hornet has a voice switch and trademark 'rude' and 'polite' modes, as well as speed and decay controls, to give the user many sounds to explore.

The Hornet also comes in a professional version, which adds CV/Gate inputs so the user can control it from an analogue sequencer and sync it to their computer.

Dr Mike Blow has designed and manufactured a device called the Hornet, a small digital box which creates a variety of synthesiser sounds in response to the user’s hand motion.