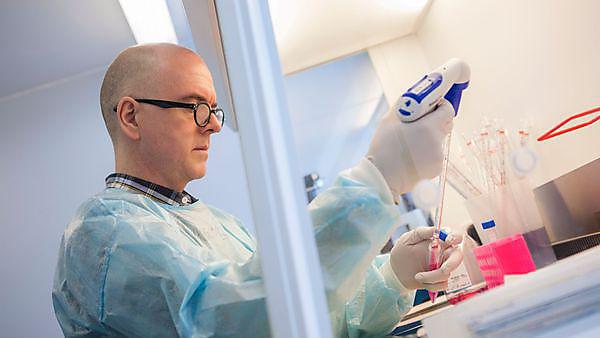 Dr Michael Jarvis, who leads the work in the development of a new type of vaccine - Zoonoses Barrier Vaccine

A team of international scientists led by Dr Michael Jarvis at the University of Plymouth has received funding in excess of £408,000 from Innovate UK to develop a new and economic vaccine designed to halt the spread of highly pathogenic ‘zoonotic’ (spreading from animals to humans) infectious diseases.

This study focuses on a new kind of vaccine called a Zoonoses Barrier Vaccine (ZBV), which is aimed at human health. It does so by targeting the deadly pathogens in the animal species from which they are emerging. Due to the lower stringency of approval requirements for animal compared to human vaccines, the predicted time to commercial availability of such ZBVs is greatly reduced compared to a vaccine destined for direct use in humans.

These considerable advantages have led the WHO-directed R&D Blueprint Initiative which is developing a road map to MERS-CoV product development (MERS-CoV is a highly pathogenic zoonotic disease spread from camels to humans) to conclude that “[i]t will be important to shore up funds for a camel vaccination option, as this may be the fastest developmental and regulatory route toward licensing a product that can prevent human MERS-CoV infections and deaths”.

Zoonotic transmission of microbes from animals to humans is the most common route whereby highly pathogenic microbes enter the human population. The most notorious of these microbes is the virus that causes Ebola, but as potentially devastating are those responsible for Lassa haemorrhagic fever, SARS, MERS, plaque, Rift Valley Fever Virus (RVFV) and Q Fever (QF). The ever more frequent interaction of humans with wild animals and their environments through deforestation, changes in land use and increased hunting, is dramatically increasing the rate at which these diseases are entering the human population.

Strategies to control such diseases are, however, limited and the severity of outbreaks is compounded by the fact that they commonly occur in under-resourced, low and middle income countries (LMICs). Modern air transport shrinks the distance between LMICs and western high-income countries making emerging microbes all of our problem.

In answer to a call from a UK Vaccine Network Competition Brief to address the capacity gap in how to control emergence of these pathogens, Dr Jarvis’s collaborative network centred at the University of Plymouth has been awarded the funding for an initial ‘proof-of-concept’ project to target ruminant animal populations (ie., sheep, goats and cattle) involved in the spread of RVFV and QF to humans.

As this vaccine also has the potential to prevent the devastating ‘abortion storms’ frequently associated with RVFV and QF infection of these animals, this vaccine approach is potentially a ‘win-win’ situation for animals and humans alike. The team plans to deliver the vaccine using a bovine herpesvirus as a platform, which has been shown to create an immune response in all common domestic ruminant animals tested. Similar to other vaccines used in agricultural animals and also humans, the vaccine is attenuated so that it only replicates for a short period of time in animals. This increases the safety of the vaccine without affecting its effectiveness to induce a good immune response.

“The funding from Innovate UK will be critical to develop this innovative vaccine platform, in this case for two pathogens that are lethal to both agricultural animals as well as to the vets and farmers that are exposed to infected animals. I think this project however also exemplifies the capacity building strategy of UK Innovate. We are developing the same attenuated vaccine platform as an achievable means to address bovine TB problem, which is currently such a huge problem in the Devon countryside I call home. Such synergism can really benefit problems that at first appear so diverse.”