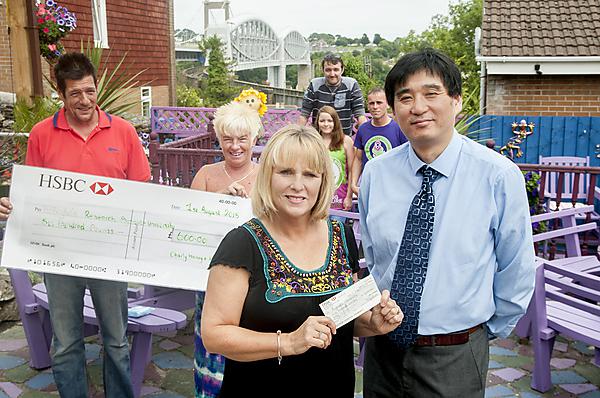 Around 200 local people took part in a charity karaoke event in Saltash to raise funds for research at Plymouth University Peninsula Schools of Medicine and Dentistry (PUPSMD) which is seeking a treatment for Huntington’s disease.

The event was a huge success and raised £600 for the cause.

It was organised by Liz Fedrick, whose 23-year old niece Charly Honey was diagnosed with the Huntington’s gene about nine months ago. Charly lives in Torpoint and is a care worker, and helped her aunt organise the event.

Liz held the event at the Two Bridges Inn in Saltash. A friend, Pete Brandon, provided the karaoke equipment and ran it for free while the pub provided a buffet at no cost. This meant that all the money raised from the raffle went to support the Huntington’s research at Plymouth University.

“A group of us went on a lab tour and met the research team at the University, and we decided there and then that we would raise money to support their work in finding a treatment for the disease.”

“The charity karaoke evening was our first fundraising event for the team and we are so pleased with the way it went, and our thanks go to everyone who helped – including Pete for the karaoke equipment, Bridget at the pub for laying on the buffet and donating additional money from a pub quiz night, and Jamie Lake, Chris D’Silva and all the other local Huntington’s supporters who pitched in.”

Research into Huntington’s disease at Plymouth University is led by Dr Shouqing Luo. He said:

“We are really grateful to Liz and everyone who held this event to support our research. It is humbling to think that they put all this time and effort into it and we will use the donation wisely in our work.”

“This kind of local support for our work is vital to the progress of our research, and we are delighted to do anything we can to help local groups who want to fundraise for us. Our thanks go to Liz and everyone involved for this superb effort.”

Researchers from PUPSMD recently received a grant of nearly £520,000 from the Medical Research Council, to investigate the potential of manipulating activity at a cellular level in order to develop an effective therapy for Huntington’s disease.

The team will analyse a protein called Bim, which causes cell death in various tissues including those of the brain. At present it is unclear how Bim levels and activity increase in Huntington’s disease, and the study will aim to identify the mechanism which allows this increase. By understanding the mechanism and how it works, the way could be open for manipulating it to create an effective therapy for the disease.

Get involved with research at Plymouth University