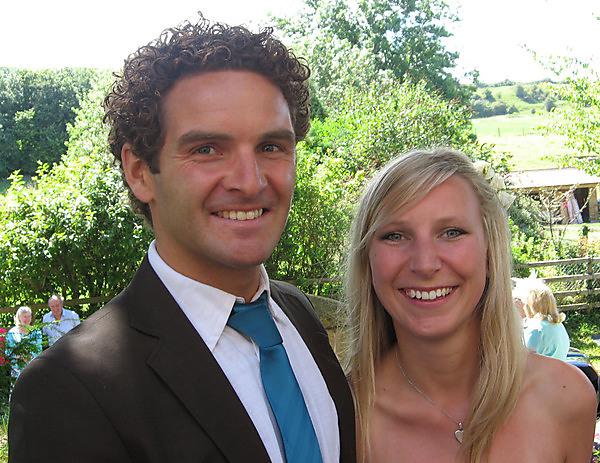 A Plymouth teacher who lost his wife to an incurable brain tumour has marked the second anniversary of her death by running 120 miles to raise money for research.

Marcus Cronin, 36, who teaches media at Lipson Co-operative Academy, spent his half-term break taking on the challenge in Portugal. He did this in memory of Caroline Johnson who passed away at the age of 32, just six months after giving birth to their daughter Florence.

Caroline was working at the National Marine Aquarium and studying for her masters at Plymouth University when she was diagnosed with a grade 4 glioblastoma multiforme (GBM), the most comment and aggressive form of brain tumour.

She set her heart on getting married and having a baby and achieved both of these things just months before her death in October 2013. Marcus’ challenge will take him along the Rota Vicentina coastal path between Sagres, where the couple spent their first holiday together, and Sines where they spent their last.

The Coast4Caroline run will raise money for the national charity Brain Tumour Research which funds four dedicated research centres including one at Plymouth University.

Marcus, of Commercial Road, said: “Caroline was infuriated about how little money was spent on research into brain tumours. It is shocking to think that this devastating disease kills more children and adults under the age of 40 than any other cancer yet just one per cent of the national spend on cancer research is allocated to brain tumour research. Caroline wasn’t frightened of dying but she was frightened of being forgotten. I hope that she would be pleased that I am remembering her in this way and that the work taking place here in Plymouth and elsewhere will prevent others having to endure the suffering that she did.”

The run is also raising money for the Marine Conservation Society which Caroline was also passionate about. The couple shared a love of the ocean and the outdoors and had travelled extensively both together and individually with Caroline’s work taking to her places such as Madagascar, Fiji and Bermuda. They spent their first and last holidays together in Portugal. Next week Florence, who is now two and a half, will travel there along with friends and family who will support Marcus along the way.

“The few times that Caroline allowed anyone to see her upset about her condition was when she worried about how her illness affected others. We felt we were lucky to have each other and both desperately wanted to be married and felt blessed to have a baby together. The grieving process takes a long time but knowing Caroline was able to do the two things she most wanted makes it a bit easier. We had been through so many very difficult times together and, when Caroline died, I was just grateful that it was as she had wished. I held her hand as she passed away at home. The first thing I did was to hold Florence and, in a way, it meant I didn’t feel as if I had lost Caroline completely as I had our baby,” said Marcus.

Brain Tumour Research is striving to fund a network of seven dedicated research centres whilst challenging the government and larger cancer charities to invest more in brain tumour research.