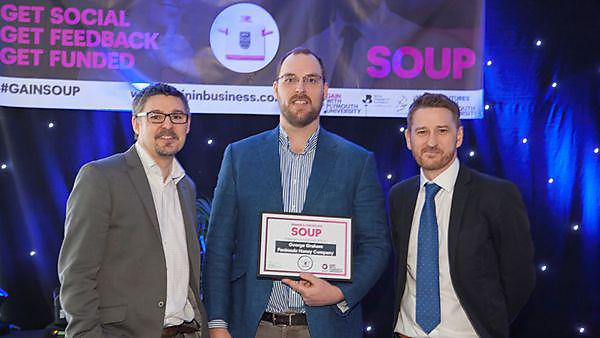 An urban micro-farm producing artisan honey from beehives based in city centre locations was the winner of the first SOUP event for the South West organised by Plymouth University’s GAIN team to support investment-hungry businesses in the region to grow.

SOUP has become an international crowdfunding phenomenon after starting in Detroit, enabling young businesses to pitch their ideas to an audience over a bowl of soup before those who paid for a lunch ticket then vote for their favourite, and the winner takes home the takings to support their venture to grow.

Four businesses took part at the first GAIN SOUP event held at Plymouth University this week (Feb 3rd), with each pitching for four minutes to an audience of 100 guests including business support experts and business leaders, before answering four questions.

The audience then used their soup spoons to vote, with the winner receiving a £750 investment made up of ticket sales and supplemented by GAIN, as well as a package of other benefits including the first place among the GAIN20, a pioneering new network to promote 20 of the most innovative and exciting businesses in Devon, Cornwall and Somerset and support their growth through ongoing close engagement with the University and its partners.

Peninsula Honey Company took the top prize after founder Dr George Graham asked for support to grow his start-up business, which aims to reduce our nation’s reliance on imported honey by producing more locally. The concept could also enhance urban biodiversity, and the business operates as a Charitable Incorporated Organisation (CIO) as it plans to provide honey for families in food poverty.

Dr Graham wants to establish more managed beehives at locations across Plymouth including rooftops and city centre gardens, with businesses able to sponsor hives. He said:

“I’ve been aware of the SOUP movement in America for a while but when I applied to take part in the first South West SOUP event, I just hoped it would help me meet more people.

“I was really surprised by how well my idea was embraced, and gobsmacked that people thought it was good enough to vote for - winning was a complete surprise, and I’m thrilled.

“The money will be a boost, but the opportunity to network with some serious players in the Plymouth business community and the wider South West business community has been invaluable. Winning a place on the GAIN20 programme and the package of support from other businesses associated with GAIN will be of even more help, as our business model needs that connectivity to help us get established.”

Peninsula Honey Company was the fourth business to pitch to the SOUP audience over lunch. The other three ventures were:

All three were well received by the SOUP audience but the Peninsula Honey Company narrowly won out in the final vote with its plan to install beehives across city centre locations in Plymouth - and eventually across the South West.

Dr Graham, who works full-time as a research scientist for a charitable organisation and launched the honey making business in his spare time, said:

“At the moment, 95 per cent of honey in the UK is imported which is crazy, as we produce fantastic honey in this country, and we have the capacity to make more.

“This started as a hobby beekeeping operation for me and expanded with the germ of an idea which people seem very interested in. We now have 11 hives with 750,000 bees and three staff members caring for them, and are looking to put more hives into businesses and locations in Plymouth, using rooftops and city centre gardens.

“We offer a bespoke management service, with the cost on average being £1,000 a year for a managed hive, but there are varying ways of becoming involved as businesses can part sponsor a hive.

“Our driving mission is to do social and environmental good, so we want to generate enough honey to give some away to people in food poverty, and gaining support to reach more businesses and expand the operation will help us achieve that.”

As well as the £750 investment and place on the GAIN20, Dr Graham also won a month’s free fellowship of the RSA, courtesy of RIO, and six months’ mini membership of Plymouth and Devon Chamber of Commerce. He has the option of taking a place at Plymouth University’s award-winning Formation Zone, which provides workspace as well as professional support, and free access to the Futures Entrepreneurship Centre’s BETA Enterprise programme.

Corporate Projects Manager for Plymouth University, Richard Adams, said: “SOUP is a fantastic concept which GAIN is delighted to have brought to the South West to engage local people and business leaders with young and growing businesses in the region, and the first event has exceeded our expectations in every respect, with all the tickets sold out in advance, and more people arriving on the day who were keen to take part.

“SOUP is a genuine grass roots crowdfunding initiative to help develop enterprises and support them to get to the next stage, and it was great to see the energy and enthusiasm in the room at the first event as our four very worthy businesses took part and pitched to an audience of experts, including some of the leading businesses and business support networks in the South West.

“We are looking forward to holding many more SOUP events over the next few months.”

A further three SOUP events are planned for the spring.

Find out more about GAIN