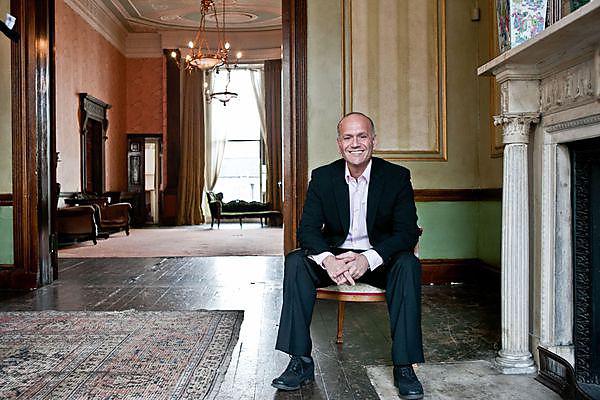 Californian entrepreneur and former BBC Dragon Doug Richard will be the keynote speaker at the annual Cornwall Lecture on November 18 which is being relaunched by Plymouth University and law firm Stephens Scown LLP.

Drawing inspiration from the Cornish motto ‘One and All’, Doug’s lecture “Our new Industrial Revolution: Opportunity for One and All” will focus on how new technologies are in the process of transforming all businesses and how by exploiting them, Cornwall can once again become a beacon of prosperity.

The event takes place during Global Entrepreneurship Week and as part of a new format, a panel debate following Doug’s address will see him joined on stage by representatives from key sectors of the Cornish economy for some lively interactive debate over the future of the Duchy.

The Cornwall Lecture is free of charge and will take place at the Hall for Cornwall on Tuesday, November 18 2014 at 6pm (until 7:45pm) – anyone interested in attending should register via the link at the bottom of the article.

This year’s event is being hosted by Plymouth University and Stephens Scown and is being run with the support of GAIN (The Growth Acceleration and Investment Network), the Cornwall and Isles of Scilly Local Enterprise Partnership (LEP), Cornwall Chamber, Cornwall College and Truro and Penwith College.

“I am pleased to be able to work with Plymouth University to bring back the Cornwall Lecture. It has played an important role in helping set the agenda for the economic and social development of the County and its relaunch now is timely. I look forward to hearing Doug’s talk and the debate it will no doubt stimulate.”

“We felt it was entirely appropriate to support the Cornwall Lecture given Plymouth University’s long tradition of working in partnership in Cornwall, including through our operation of the Cornwall Innovation Centres, our work with partner colleges and University’s role in educating a third of Cornwall’s higher education students.

“We are very fortunate to have secured such a high-profile and inspirational speaker as Doug Richard, who with his relentlessly positive attitude towards getting things done, his own personal track record of success and his world view of our businesses is sure to challenge us – one and all – to do things differently.”

Doug Richard was born in the USA and built and then sold a number of major software companies in the US, before moving to the UK in 2001. He has many years of experience launching new enterprises into uncertain markets and teaching aspiring entrepreneurs the skills they need for success in business. Co founder of investment society, The Cambridge Angels, responsible for a large number of the “Cambridge Phenomenon” success stories, Doug became known to millions of people through his appearances on the BBC programme Dragons’ Den where his pragmatic and forthright approach to exploring participants business models made a memorable addition to the programme.

In recognition of his encouragement of start-up businesses, Doug was awarded the Queen’s Award for Enterprise Promotion in 2006. In order to share his experience with a broader audience, he founded the not-for-profit School for Startups in 2008. This social enterprise is focused on teaching entrepreneurship across the country which now successfully operates across the South West. In 2012 Doug was asked by the coalition government to undertake a review of Apprenticeships, with the pragmatic results being quickly implemented. Doug has been working closely with Plymouth University for some time, and in recognition of his work with businesses was awarded an Honorary Doctorate in 2013.

Registration for the Cornwall Lecture 2014 is free of charge and treated on a first come first served basis.

Register for the Cornwall Lecture