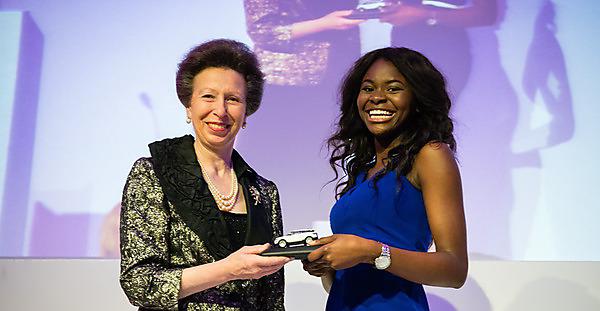 A mechanical engineering student from Plymouth University is set to inspire the next generation of female engineers after winning a prestigious scholarship with Jaguar Land Rover.

Temi Danso beat 200 applicants to earn the Range Rover Evoque undergraduate scholarship, which was presented by HRH Princess Anne at the Women in Science and Engineering (WISE) awards. The awards celebrate female talent in science, technology and engineering, from classroom to boardroom, and were held at The Grange Hotel in St Paul’s, London earlier this month.

Following 200 paper applications earlier this year, Temi was one of ten women invited for interview, of which three were shortlisted for the award.

Now Temi’s overall victory means that as well as the scholarship, she will receive mentoring from Jaguar Land Rover and WISE, and financial help with her studies.

The second-year student described her experience as ‘incredible’ and has now been inspired to set up a Women’s Engineering Society at Plymouth University.

“I was amazed. Being in the top three and invited to the ceremony was incredible enough but to actually go on to win, I was speechless. Winning the award has now inspired me to start a Women’s Engineering Society here in Plymouth. It was something I've always wondered about doing but now I have the confidence to do it.

“I have a passion for engineering so I'm hoping to share my passion with other girls that may not know of this career path. I want to inspire them and show them that engineering shouldn't just be a man's world.”

On top of receiving her scholarship, Temi spent the day attending a conference and meeting key women in the science, technology, engineering and maths (STEM) industry. The awards ceremony itself also began by challenging attendees to build a duck out of Lego, followed by a team competition to build a miniature car.

“It was truly amazing to be in a room full of remarkable women doing so much for STEM. I had the chance to network with women in the industry from various companies and, after I met Dawn Bonfield, the president of Women's Engineering Society, I knew I wanted to inspire other people too.”

Temi will start the scholarship with Jaguar Land Rover in summer 2016.

Professor Deborah Greaves, a professor in Ocean Engineering at Plymouth University who was nominated for the WISE Research Award last year, said:

“We are delighted with Temi’s success in this prestigious and highly competitive event. We aim to support all our female engineers at Plymouth through school and faculty-wide networking and mentoring events, celebrating women in science and engineering, and believe that Temi’s achievement will also help to inspire other women to aim high”.

“Temilolu is someone with real potential, having great communication skills and being an enthusiastic representative of both her course and the University.”