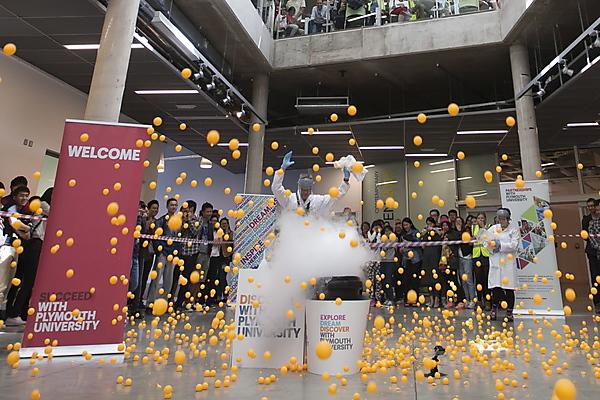 It was one of the most iconic experiments and public performances in the recent history of the University: what happens when you place liquid nitrogen in a container filled with 1,650 ping-pong balls?

The answer was provided by Dr Roy Lowry, Associate Professor in Physical Chemistry, who transformed Roland Levinsky Crosspoint into the Kennedy Space Centre back in the summer of 2015 and demonstrated to a gathered audience the explosive results.

Using video cameras, the team captured the moment as hundreds of ping-pong balls were fired high into the atrium. The footage was later released via the University’s website and was requested by several media outlets.

Now, nearly four years on, researchers in Brazil and Germany, partly inspired by that video – and using images supplied to them by Dr Lowry – have revealed the underlying physics to a peculiar phenomenon that occurs at the moment of lift-off.

Published in the American Journal of Physics the research paper explains why the container barrel can be seen to move upwards at the same time as the balls, something counterintuitive to Newton’s third law which states ‘for every action, there is an equal and opposite reaction’.

A combination of ‘granular jamming’ and Coulomb’s friction is the reason why the container lifts off the ground, rather than it being forced backwards or compressed in upon itself.

“While the original event was designed to enthuse the next generation of scientists, it is fabulous to see that it also inspired the current generation to think more deeply about an apparently simple system,”

said Dr Lowry, a Member of the Royal Society of Chemistry and Fellow of the Higher Education Academy.

“And now it’s gone full circle as their paper has inspired an article in a science magazine for the public!”

Indeed, it has now looped back to Plymouth, as the Brazilian media have requested images from the original experiment to illustrate the story.

“I became a chemist thanks to a teacher who regularly showed us chemistry as well as taught it,”

“I’m a firm believer in the power of the visual to generate passion for a subject and we need passionate problem solvers in today’s world.”

View the paper ‘Ping-pong ball cannon: Why do barrel and balls fly in the same direction?’ in the American Journal of Physics.

Experiments like this are the shop window for science. My hope is that such experiments will excite young (and not so young) minds to ask how and why such things happen and hence to delve deeper into science 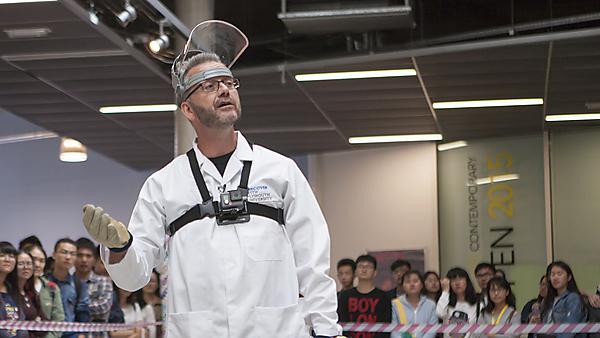 One of my favourite experiments is where I produce a two-storey sheet of flame from a single packet of Angel Delight. It demonstrates that you can have all the fuel in the world, but if you don’t have air then you won’t get the reaction