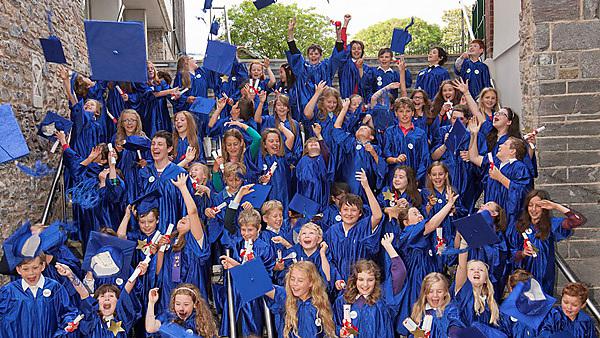 Around 70 students from the Devon Children’s University received their ‘degree’ certificates from Professor Iain Stewart after completing their out-of-school programmes.

Iain, Chancellor of the Devon branch, broke from filming his latest BBC programme to lead the ceremony on campus – the second annual graduation since the university launched in 2012.

“The Children’s University plays an important role in engaging children in the value of life-long learning and opening their eyes and minds to the kinds of opportunities they can experience through education,” Iain said. “I’m honoured to be the Chancellor for the Devon branch, and I simply would not have missed the graduation ceremony for anything.”

In total, 270 people attended the event, with many of the families travelling from the Okehampton and Tavistock areas to be a part of the celebration. It began with a pre-graduation party in a marquee on campus, where there were a number of interactive activities laid on by some of the learning partners in the Children’s University, including the Barbican Theatre, the Theatre Royal, and the Plymouth University Raiders basketball team.

The children, who ranged in ages from 7-14, were fitted for their gowns and then followed the Plymouth University ceremonial mace in a procession to the Sherwell Building. There, they were addressed by their Chancellor, Professor Stewart, who at one stage demonstrated the techniques for wrestling an alligator. He then presented scrolls and gold badges to the graduating students. Each had undertaken at least 100 hours of out-of-school learning, with some passing the 200 and 300-hour marks to earn Gold Certificates and Gold Diplomas respectively.

Shirley Walker, Head of Careers & Employability at Plymouth University, and lead for the Devon branch of the Children’s University, said: “It was an inspirational occasion to see so many youngsters recognised for their learning achievements and to be able to share the moment with their proud families. And it was fitting that a number of the learning partners were there, as it is thanks to them that the Children’s University is able to provide such inspiring locations for its students to engage with the programme.”

Plymouth University and Devon County Council have jointly developed the Devon initiative, with the help of accredited ‘public learning destinations’ such as Paignton Zoo and Living Coasts.

The University also helps to run the Cornwall and Torbay branches of the Children's University. 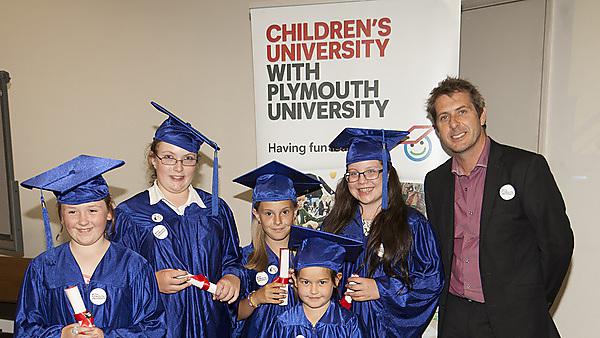 Students enrolled at The Children’s University earn special passport stamps when they take part in learning activities and those who reach the gold standard of 100 hours will graduate on the Plymouth campus.