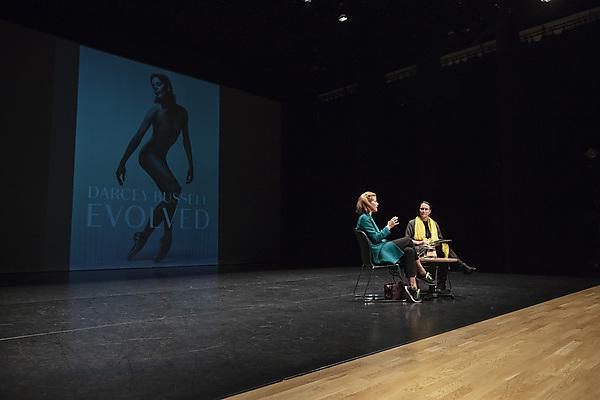 “Enjoy the diversity of dance – and be fearless!”

These were just some of the words of advice that Dame Darcey Bussell offered to aspiring artists and performing arts students at the University of Plymouth during a special on-stage interview last week.

The former award-winning ballerina, and star judge on BBC’s Strictly Come Dancing, provided a fascinating insight into her career, her inspirations, and some of the projects she has undertaken since she retired from professional dance, during the hour-long session in The House, the University’s performing arts centre.

In front of an audience of undergraduate and postgraduate dance students, and interviewed by Ruth Way, Co-Director of the Plymouth Conservatoire, Darcey revealed how it took her a long time to fall in love with dancing and that it was initially just a way of burning off energy. But from being a 'bit of rebel, refusing to join in and hiding under the piano', Darcey began to flourish in the environment of a performing arts school, and chose to specialise in ballet.

“I came to ballet quite late – I had effectively missed two years and was really far behind,”

she told the audience.

“I went from doing ballet twice a week at stage school to six days a week at the Royal Ballet School, but it gave me that grit and determination because I just didn’t want to give up. And I had teachers saying ‘well, this is obviously not for you’, ‘you haven’t got the head for it’, and ‘you need to be determined and you’re obviously not’. And because I felt I had nothing to fall back on, this gave me a focus and a determination to make it work. It gave me the fight and resilience I needed.”

Darcey also talked candidly about her struggles with dyslexia.

“At first, I didn’t pick up exercises very well,”

“Often the whole class would go one way, and I would go the other, and I would think ‘they must be doing it wrong?!’ It was one of the many things that I learned along the way that ultimately gave me confidence and resilience.”

Inspired by her teachers, Darcey told the students that she most enjoyed learning and training in the dance studio, breaking down movements and building them up again. She said that working with collaborative choreographers such as Kenneth MacMillan had provided her with her most exciting and rewarding moments of her career, and that she found experimental one-act ballets more interesting than the three-act classics like Swan Lake. And it was this that influenced her decision to choose a small, innovative ballet as her final professional role, when she retired in 2007. She said:

“Everyone said ‘Why don’t you go out on a three-act classic ballet?’ And I said ‘no’. There was one ballet that I wanted to retire on and that was one that I had done at the very beginning of my career when I was thrown into it. It came back twice in my time and I didn’t get to do it, and it happened to come round again in that one season when I was retiring. It was an abstract piece about life and death, and it had all of these wonderful meanings behind it of grabbing on to life and enjoying every minute of it.”

Some footage of that performance, as well as a number of other key moments in her career – such as her role in the closing ceremony of the 2012 Olympic Games – were shown at the conclusion of the interview. It also included footage of the Diverse Dance Mix (DDMIX) social enterprise that Darcey launched in 2016 to encourage people of all ages – but particularly schoolchildren – to engage in dance activities as a way of promoting physical activity, wellbeing and fun.

“We’ve been on a mission – but the hard thing is getting it out there. When you say ‘dance’, people say ‘why?’ They think dance is for highly-skilled individuals, or is something that is quite static to teach. But we’ve worked hard to make sure it is about engagement and enjoyment. It is about breaking down barriers and making it incredibly inclusive so that any child of any ability and of any age can do it.”

At the end of the event, Darcey took a number of questions from the students, and she finished with a final message to the young audience.

“Whether it is staging a dance, being a choreographer or designer – I’d advise you to try everything that is out there. Don’t ever believe that there is only one path for you – there are lots of paths and you do have to have a go at them! We always gravitate to successful people, but work with people that have new ideas, that have different thoughts and methods. It is a creative world and you evolve with different people.”

Connie Thornton was one of the students in the audience. She said afterwards:

“It was wonderful to have Darcey visit the University and speak to us. She is a very motivational and genuine figure, and I found it very beneficial to be a part of!”

“Whether it is staging a dance, being a choreographer or designer – try everything that is out there. Don’t ever believe that there is only one path for you – there are lots of paths and you do have to have a go at them!" 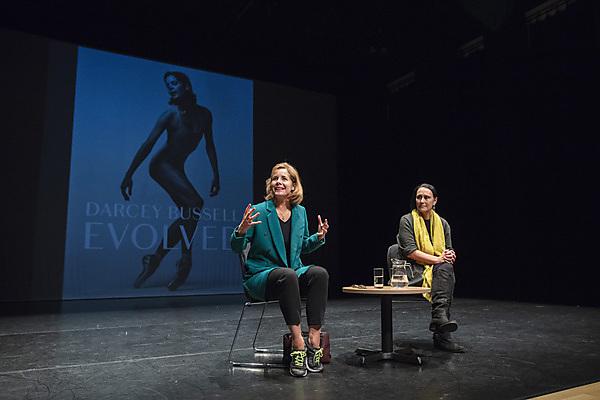 The only Conservatoire in the UK where students can benefit from the unique mix of expertise on offer when a theatre and a university combine.

Experts from the University of Plymouth and Theatre Royal Plymouth work together to give talented students training and professional experience that will set them apart in today’s arts and creative industries. Here, performing arts students – actors, dancers, and theatre-makers - will have the very best, up-to-date industry expertise, research and teaching practice as well as unrivalled access to professional opportunities

Find out what it's all about