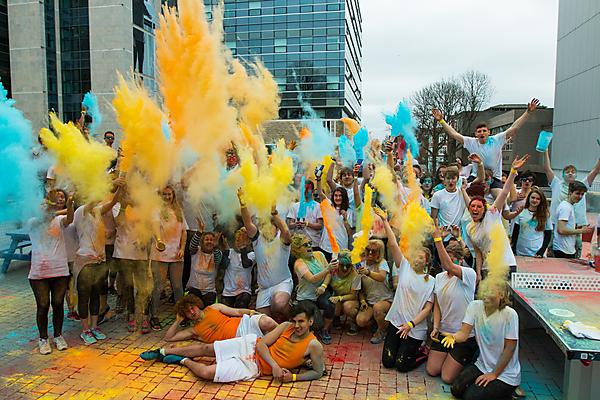 Students from Plymouth University have held the first ever colour dash in the city, and it has raised £4,000 for the charity Brain Tumour Research.

Almost 300 students took part in the event, where they donned their brightest white gym kit and ran round an obstacle course on the University campus – while being pelted with brightly coloured powder paint.

The event was one of several run by the University throughout March, which is Brain Tumour Awareness Month. Each event is raising money for Brain Tumour Research, which supports one of its Research Centres of Excellence at Plymouth University.

The brain tumour research team in Plymouth are leaders in Europe for research into low grade brain tumours, which typically affect children and young adults. Their work focuses on identifying and understanding the mechanism that makes a cell become cancerous. They are exploring ways in which to halt or reverse that mechanism. An innovation will be testing new drugs in human primary cell cultures leading to innovative phase 0 trials. It is hoped this will be followed by adaptive phase II/III trials with the potential for making drug therapies available to patients safely and more quickly.

The colour dash was led by Plymouth University’s Student RAG (Raise and Give) supported by the University’s Campaign Team and External Relations Department. Heading the organisation was Yasmin Hajiyanni, a student intern in the Campaign Team. She said:

“We are so pleased that the event went well and raised such an impressive sum for Brain Tumour Research. I have had great support from both students and colleagues, especially Caitie Hall whose enthusiasm and experience in running such events have been invaluable, the RAG committee and students from SU:Media who filmed and photographed the event. It is so important that we support research into brain tumours, not just because of our partnership with the charity but also because it is the biggest cancer killer of people under 40, yet receives less than one per cent of total cancer research funding.”

Christian Burden is Director of Development at Plymouth University. He said:

“My congratulations go to everyone who was involved with this fundraiser – not only was it great fun but it also raised a significant sum for an important partner. Local support – from individuals, organisations and businesses – is a vital component of our ongoing research.”

If you would like to support research at Plymouth University, please visit www.plymouth.ac.uk/campaign, email campaign@plymouth.ac.uk or call 01752 588045. Your support can make all the difference.

Footage from the event