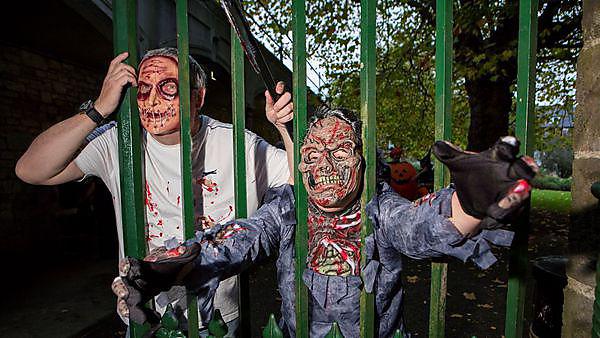 Cleaners, supervisors and campus support all joined forces to raise money for research into brain tumours

Members of the cleaning team at Plymouth University held a fund raising day on 28 October 2016 and raised an amazing £668 to support the brain tumour research at the University, in memory of their colleague John McMahon who succumbed to the condition in 2014.

John, who was 61 when he died, was Cleaning and Environmental Services Manager at the University and had worked there for 16 years before his death. His widow Judith, said:

"John had to retire through ill health in 2010 after he was diagnosed with a low-grade glioma tumour. A year later the tumour had changed into an aggressive grade 4 and we were told, with treatment, he could live for 20 months. We were lucky in that he actually had another three-and-a-half years. More research and better funding could give people like John more hope, more time, and eventually lead to a cure."

On 28 October John’s former colleagues carried out their duties in fancy dress and held a number of mini events throughout the day – many with a Hallowe’en theme.

Activities included a coffee morning with spooky cakes and ‘gooey goodies’; guessing the number of eyeball sweets in a jar; guess the name of the black cat; painting black of left thumbnails and a bric-a-brac stall.

The £668 will go towards funding a PhD research student in the brain tumour research team, who are world leaders in the investigation of low-grade brain tumours, which typically affect children and young adults. Sandra Hussey, Cleaning Supervisor, said:

"It was a fun packed day which everyone involved felt proud and pleased to be part of. The amount raised exceeded expectations from us all ,and it has spurred us on to do more to help fund a PhD student and keep John McMahon's memory alive We had overwhelming support from staff across the campus who fully supported our efforts and cause . Many thanks to all who contributed."

The research team's work focuses on identifying and understanding the mechanism that makes a cell become cancerous and exploring ways in which to halt or reverse that mechanism. They are finding new biomarkers and drug targets in human primary cell cultures and investigate how existing drugs could be re-purposed as a therapy for brain tumours, making drug therapies available to patients safely and more quickly. This is vital work, as the only treatments currently available for brain tumours are invasive surgery and/or radiotherapy.

The research carried out at Plymouth is such that it secured a partnership with the charity Brain Tumour Research, which means it is one of only four Research Centres of Excellence in the UK

The brain tumour research team is led by Professor Oliver Hanemann. He said:

“Our thanks go to the University’s cleaning team for this superb effort. Local fundraising is important to us, as this area of cancer research is vastly underfunded but desperately needed to continue our vital work, which we are confident will bring us closer to finding new therapies and a cure.”

Local support for the Centre of Excellence and wider initiatives connected to the brain tumour research at the University, has included the Peninsula Medical Foundation, a bequest of £100,000, and a number of organisations including Plymouth Argyle FC, Plymouth Raiders, Dartmoor Zoo, WBW solicitors, Bright solicitors, and local branches of Santander.