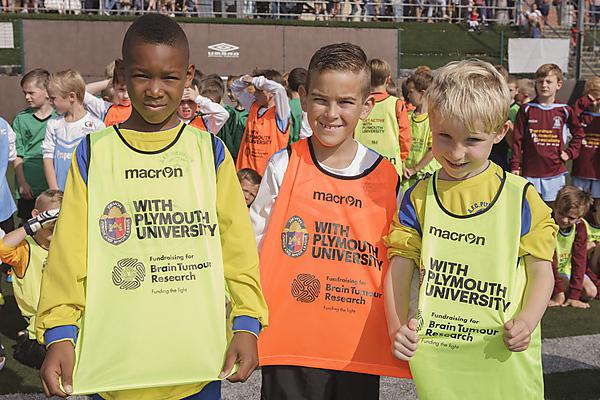 The budding Beckhams of the Devon Junior and Minor Football League will be helping raise much needed money for ground-breaking local research into brain tumours, thanks to an exciting new partnership between the league and national charity Brain Tumour Research.

The League has agreed a charity partnership with Brain Tumour Research, which includes exclusive rights to fundraise at each League event.

More than 5,000 young people aged between six and 18 are involved with the league, which comprises over 300 clubs. Events include Football on the Piazza in Plymouth, a mini soccer festival and fiercely contested cup finals, as well as well-attended matches throughout the football season.

Brain tumours are indiscriminate, leaving parents without children and children without parents, and are the biggest cancer killers of those under 40.

The charity funds research at four Centres of Excellence in the UK, including Plymouth University. Scientists at the Plymouth University Peninsula Schools of Medicine and Dentistry are focussing investigations into this devastating disease, specifically on low-grade brain tumours. Their ground-breaking research is aimed at improving quality of life and survival rates for brain tumour patients, with the ultimate aim of finding a cure

Lauren Ryan, Regional Fundraising for Brain Tumour Research said: “Tragically brain tumours devastate many young lives and those of their families, yet we know through better research we can improve outcomes for patients. We are delighted to have the backing of the Devon Junior and Minor Football League and wish them every success this season.”

Bernard Leach from the Devon Junior and Minor Football League added: “All the Teams in the FIL DJM Football League are fully supporting Plymouth University to help Brain Tumour Research and have made it our charity for the Season 2014-2015. We will run events during the season to help raise funds.”