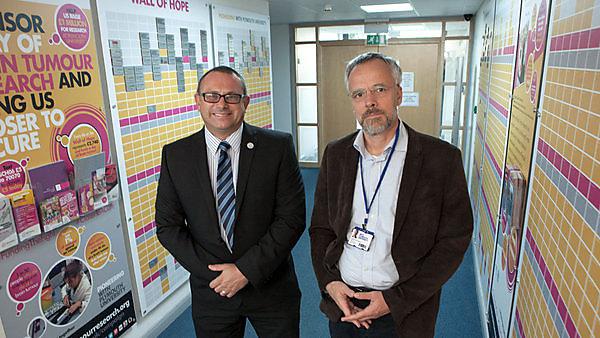 A former emergency services worker who lost his father to a brain tumour has started a new career to help others affected by the disease.

Peter Jordan, 47, of Dartmouth Road, Paignton, has taken on the role of community fundraiser with the national charity Brain Tumour Research. His career change was prompted by the death of his father Jim Jordan at the age of 76 to a glioblastoma multiforme, the most aggressive and common form of brain tumour.

Said Peter: “During my 27 year career with South Western Ambulance Service I attended train crashes, car and motorbike crashes, sudden deaths, helped the walking wounded and delivered five babies. I am proud to say that I saved lives and I would be with people in their homes as they went through very difficult times but, despite all this, nothing could have prepared me for what happened to my father. His brain tumour was inoperable and robbed him of his personality and his co-ordination. A naturally gentle man, he became very aggressive and then helpless. I was with him in hospital for his last days. I spent almost three decades helping people but there was absolutely nothing I could do for my own dad.”

In his new role, Peter will cover the South West region, working in partnership with the Brain Tumour Research Centre of Excellence at Plymouth University where scientists are focused on understanding more about brain tumours in order to improve outcomes for patients and find a cure.

Peter said: “My dad lived in Paignton for many years. He was diagnosed in January 2013 and passed away just three months later at Cadogan Court in Exeter. I was shocked, horrified, and disgusted to discover that such a dreadful and debilitating disease gets so little funding. It affects people of any age, in fact brain tumours kill more children and adults under 40 than any other cancer, yet receive just one per cent of the national spend on cancer research. Now I will be helping people in a different way and I am proud to be part of the team which is enabling this vital work to take place in the region in which I have lived and worked all my life.”

Along with Plymouth, Brain Tumour Research has three other Centres of Excellence – one in Portsmouth and two in London – and is striving to fund a network of seven dedicated centres whilst challenging the government and larger cancer charities to invest more in brain tumour research.