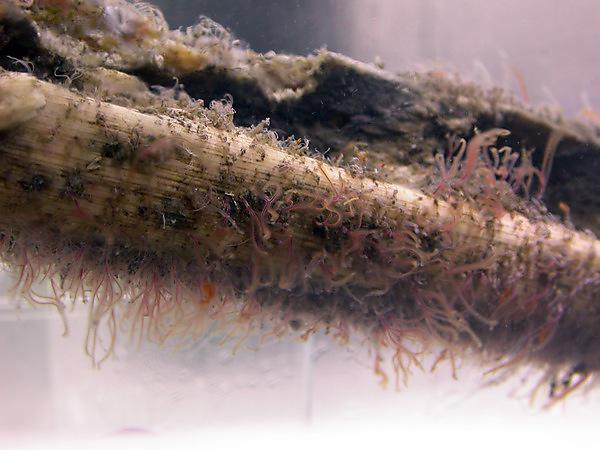 A species of bone-eating worm that was believed to have evolved in conjunction with whales has been dated back to prehistoric times when it fed on the carcasses of giant marine reptiles.

Scientists at Plymouth University found that Osedax – popularised as the ‘zombie worm’ – originated at least 100 million years ago, and subsisted on the bones of prehistoric reptiles such as plesiosaurs and sea turtles.

Reporting in the Royal Society journal Biology Letters this month, the research team at Plymouth reveal how they found tell-tale traces of Osedax on plesiosaur fossils held at the University of Cambridge Museum.

Dr Nicholas Higgs, a Research Fellow in the Marine Institute, said the discovery was important for both understanding the genesis of the species and its implications for fossil records. He said:

“The exploration of the deep sea in the past decades has led to the discovery of hundreds of new species with unique adaptations to survive in extreme environments, giving rise to important questions on their origin and evolution through geological time. The unusual adaptations and striking beauty of Osedax worms encapsulate the alien nature of deep-sea life in public imagination. And our discovery shows that these bone-eating worms did not co-evolve with whales, but that they also devoured the skeletons of large marine reptiles that dominated oceans in the age of the dinosaurs. Osedax, therefore, prevented many skeletons from becoming fossilised, which might hamper our knowledge of these extinct leviathans.”

The finger-length Osedax is found in oceans across the globe at depths of up to 4,000m, and it belongs to the Siboglinidae family of worms, which, as adults, lack a mouth and digestive system. Instead, they penetrate bone using root-like tendrils through which they absorb bone collagen and lipids that are then converted into energy by bacteria inside the worm.

Typically they consume whale bones, prompting many scientists to believe that they co-evolved 45 million years ago, branching out from their cousins that used chemosysnthesis to obtain food.

But Nicholas, and research lead Dr Silvia Danise, of Plymouth’s School of Geography, Earth and Environmental Sciences, studied fossil fragments taken from a plesiosaur unearthed in Cambridge, and a sea turtle found in Burham, Kent.

Using a computed tomography scanner at the Natural History Museum – essentially a three-dimensional X-ray – they were able to create a computer model of the bones, and found tell-tale bore holes and cavities consistent with the burrowing technique of Osedax.

The paper, Mesozoic origin for the bone-eating Osedax worms, is available in the Royal Society journal Biology Letters.