What happens when world-class science meets creative writing, with a backdrop of infamous European history? It sounds like an unlikely combination but in the case of Plymouth University Professor Richard Handy, it sparked the basis of his historical fiction novel – a thriller called The Reich Device.

Professor Handy launched the book – his first creative work, recently published by Troubador – on 1 October at Waterstones in Plymouth. A Professor in the School of Biological Sciences, he is internationally renowned for his work on nanotechnology and uses his interest in the history of science to explore the premise that the Nazis were close to developing weapons based on similar technology.

He had only ever indulged in creative writing to take a break from editing scientific papers and journals. However, when he found himself looking over Einstein’s early theories for an unrelated interest and subsequently put together a timeline, the seed was sown about what could have happened if the Nazis had taken a different route.

Professor Handy explains: “The whole thing came about from me looking at the origin of a common equation used in chemistry, the Einstein-Stokes equation, and stumbling upon information about Einstein’s life in a biography of his early works.

“Notably, one of the historical documents is a letter from Einstein to President Roosevelt, written in the 1930s with a warning that it was now possible to establish a nuclear chain reaction with the heavy element, uranium. Einstein had the foresight to raise the issue of custodianship of this potentially dangerous technology that led to the first atomic bomb, and it got me thinking about what would have happened if nanotechnology had been used to make lethal weapons instead."

Set between the wars in 1930s Germany, the book’s plot is based around fictitious Professor Gustav Mayer as he makes the monumental discovery of a new technology a century ahead of its time. But his secret is not safe, the world is not safe and the reader watches events unfold as the Nazis rise to power.

Professor Handy continued: “Of course I had to make sure that my historical facts were correct in order to provide the right context, but after that I let my imagination explore what could happen if the various strands of new technology of the day were misused.

“Needless to say, the world could have been very different if the Nazis had succeeded.”

So, with an ample helping of espionage thrown into the history, chemistry and physics of the day, coupled with creative writing, did Professor Handy ever struggle to cross disciplines?

“It’s something I’ve never consciously thought about. I started writing a short story in 2008 for a bit of diversity away from science and, although it was a little bit alien to begin with, I’ve actually found writing quite relaxing since.

“So much so that I plan to make The Reich Device part of a trilogy – I’m actually working on the second book now. Trying to write 1000 words a day, as writers suggest.

“As well as enjoying the book as a piece of writing, I hope my novel goes some way to promoting science and technology, and how fascinating the subjects can be. Or maybe even encourage people just to have a go at creative writing themselves.”

The Reich Device is available in bookshops and online as a paperback or ebook.

In this thrilling new book, Professor Handy makes use of real documents, including first-hand information directly from Albert Einstein's works in the 1920s and original letters that he wrote to President Roosevelt.

He also draws on his real life experience of working with different agencies to create this believable historical fiction. The plot is based on the premise that the Nazis were very close to developing weapons based on nanotechnology. "If they had, our world would be very different now," he said. 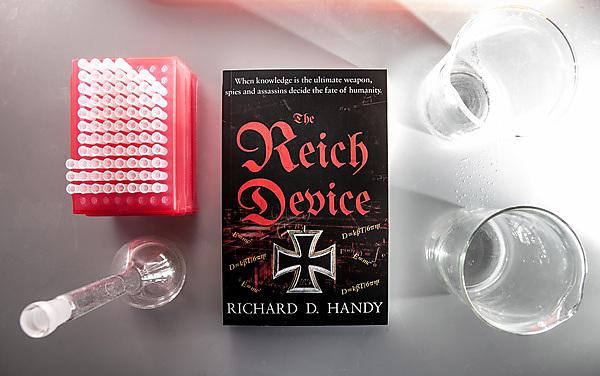