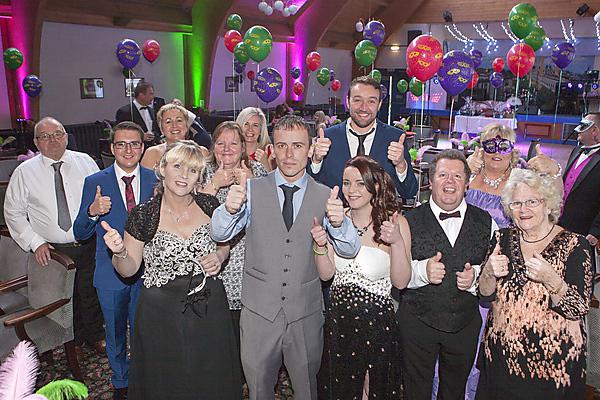 Local fundraisers at the start of the ball

Local people affected by Huntington’s disease have organised a masquerade ball which has raised in the region of £5,000 to support research into the disease at Plymouth University.

The ball was held at Saltash Social Club and raised money for vital equipment needed by scientists at the University to combat the disease.

The event was organised by Liz Fedrick and her niece Charly Honey, with assistance from Jamie Lake, Chris D’Silva, Sarahjane Dawe and Kaye Bonner. Helium for the balloon decorations was donated by Almega Ltd and the dramatic lighting was donated by Paul Raymond Speare of Stage Crew Productions.

The smooth running of the evening was helped by David Hunter, Maggie Lutley, David Bailey and Jamie Toulcher.

Anna Mitchell and Oceanne Plateck from Saltash Social Club provided the buffet and a wide variety of donations were made for the raffle and auction, including first class rail tickets and roller skates. Musical entertainment was supplied by eight-piece band ‘Risky Business’.

“We were so pleased with how this year’s ball went and we are delighted that we beat last year’s fundraising figure and that it is going to such a great cause right on our doorstep.”

“Last year we went on a tour of the labs at Plymouth University Peninsula Schools of Medicine and Dentistry to see for ourselves the fantastic work being done there to beat Huntington’s disease. As a result of that visit we have pledged to raise £20,000 for vital laboratory equipment and the money raised at the ball means that we have raised more than £7,000 of that total.”

Research into Huntington’s disease at Plymouth University is led by Dr Shouqing Luo. He said:

“Once again our local friends have run a superb fundraising event to help our research, and we are immensely grateful to them for their efforts. Support from our local community is vital to our work.”

The research team at Plymouth University is investigating the potential of manipulating activity at a cellular level in order to develop an effective therapy for Huntington’s disease.

The team are analysing a protein called Bim, which causes cell death in various tissues including those of the brain. At present it is unclear how Bim levels and activity increase in Huntington’s disease, and the study will aim to identify the mechanism which allows this increase. By understanding the mechanism and how it works, the way could be open for manipulating it to create an effective therapy for the disease.