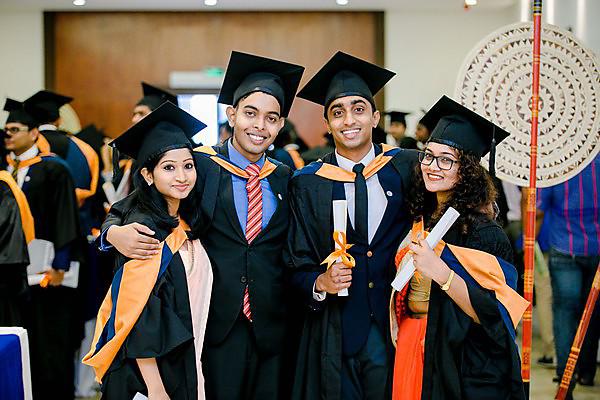 More than 1,200 University of Plymouth students graduated during a packed November in which the University hosted ceremonies in London, China, Singapore, and Sri Lanka.

After an alumni event in Beijing kicked things off, nearly 250 Plymouth students at the University of Hong Kong SPACE graduated in the first of the overseas ceremonies. It also saw the award of an Honorary Doctorate of Education to Professor Edward Chen Kwan-yiu, for his contribution to education in Hong Kong, and to the teaching of economics around the world.

Three days later, the team held an alumni event in Singapore and conferred an Honorary Doctorate of Business on Roland Tan Keng Hock, for his work in championing maritime education, to celebrate the partnership with the Singapore Maritime Academy.

Just 48 hours later, the team was in Sri Lanka for the inaugural graduation ceremony for Plymouth students at the National School of Business Management. More than 100 students were present, and an Honorary Doctorate of Business conferred to tea entrepreneur Weththinge Jinadasa. And it was an event that drew messages of support and congratulations from both the country’s President and Prime Minister.

The team then returned to the UK four days later to host 900 students at GSM London.

“The University of Plymouth, like all successful modern universities with world class credentials, is increasingly global in its work and impact. This recent tour of Asia is a good illustration of this. With graduation events in Hong Kong, Singapore and Sri Lanka and alumni events for several hundred graduates old and new across Asia over the past two weeks there was a real sense that the University of Plymouth is making a difference. It gave me a real sense of pride to see so many Plymouth graduates succeeding in different parts of the world. Although it was a busy schedule it all ran very smoothly thanks to the hard work of our Events and Graduation team.”