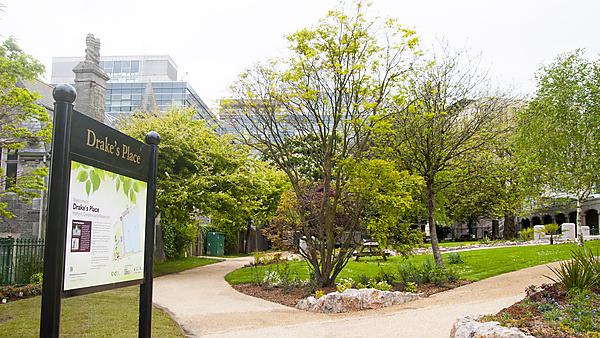 A place to unwind, refuel, play table tennis or just let off steam.

Beautifully restored to its former glory, Drake’s Place is an award-winning community space offering a calm and relaxing oasis amidst the whirl of urban living. It is an accessible, welcoming haven and a safe diverse habitat for wildlife that has been awarded the Green Flag award since 2015.


The gardens and reservoir are open during daylight hours.

Perched on the edge of campus overlooking the beautifully restored Drake's Reservoir and Gardens, our Reservoir Cafe offers a haven of tranquillity, in an often sun-drenched position. The vegetarian bistro is a certified member of the Vegetarian Society, making it a great place to stop for a healthy, light meal or snack.
Read more about the Reservoir Cafe including opening times

During the summer term there will usually be a BBQ outside the Reservoir Café on Thursdays between 12:00-2:00 (weather dependant).

Find out more about our cafés on campus

Table Tennis
There is a table tennis table in the park, free to use. Bats and balls can be borrowed from the Reservoir Café, or alternatively bring your own. 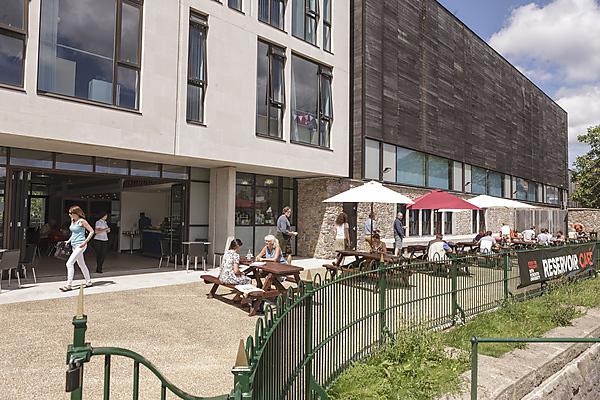 A community space for all to enjoy

To make sure that Drake’s Place was a truly inclusive project, we ran a wide-ranging consultation prior to its restoration.

This garnered over 800 comments and ideas on how we could bring the gardens and reservoir back into community life for everyone to enjoy, with opportunities for events, leisure, learning activities, training and volunteering projects.

Local community support, including through the Friends of Drake's Place, was crucial in making this project happen and is as important now as it was then.

Some of our previous events include:

Drake’s Place Gardens and reservoir have a rich history, having been an integral part of Plymouth life for a very long time.

In 1592, Plymouth built a 28km channel running through Drake’s Place, carrying water to the city from Dartmoor. This became known as Drake’s Leat after Sir Francis Drake, who oversaw the construction. Drake’s Leat supplied water to the townspeople through conduit houses around the town. The remains of two of these, the Old Town Conduit and the Higher Mills Conduit, are preserved in the walls of the reservoir.

The reservoir, built in 1825 and extended in 1828, was the main source of water for the town before new reservoirs were built at Hartley and Burrator.

Drake’s Mill stood in the gardens once too, supplying the town with flour. In the 1880s the mills were demolished, replaced by grand new gardens which opened in 1891 as a tribute to Sir Francis Drake. These featured a broad promenade along the dam of the reservoir, above a colonnade overlooking the gardens. Granite columns from Plymouth’s old market were incorporated into the colonnade.

The reservoir went out of use in the 1970s, gradually becoming derelict.

In 2007, University of Plymouth took over the lease for the gardens and reservoir from Plymouth City Council, investing £300,000 to make the gardens more attractive and secure. We opened the restoration to the public in June 2014, bringing the gardens back to their former glory. There's access along the east side of the reservoir for the first time. We've also opened up the Reservoir Café in the Nancy Astor Building, giving you somewhere to enjoy a drink or bite to eat and enjoy the scenery.

The £1.2 million project to restore Drake's Place is supported by the Heritage Lottery Fund and the Big Lottery Fund.