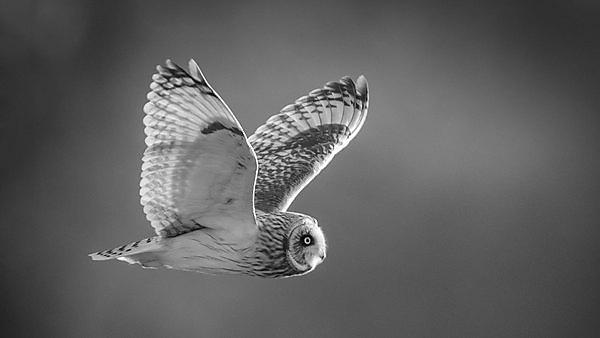 Dr Miriam Darlington looks up into the tree canopy and identifies the urgent chirping of a blackbird.

“It’s the call they make when there is a predator around,” Miriam says. “It could well be that it’s sensed the presence of an owl.”

It is a good omen – for us, if not for the blackbird – because it is for the owls that we have come to the woods at Huxham’s Cross, just a short distance from Dartington Hall in South Devon.

They have been Miriam’s muse and focus for much of the past five years, culminating in the publication of her second book, Owl Sense, earlier this year. Receiving stellar reviews in the national press, long-listed for the Wainwright Prize, and chosen by Radio 4 as its ‘Book of the Week’ in February, it’s a piece of creative non-fiction that has led many to hail her as a successor to Gavin Maxwell and Henry Williamson, and as a key figure in a new nature writing movement.

“There has been nature writing since the time of the Romans,” says Miriam, a lecturer in English and creative writing in the School of Humanities and Performing Arts. “But currently, there is a new wave of writing. It’s a disparate group, but it has togetherness on conservation and the natural environment. It’s a community that is driven by a real concern for the loss of species, for the degradation of the environment, and seeking to raise awareness for what is happening.”

Owl Sense, and Miriam’s 2012 debut Otter Country, both meditate upon these issues, as they do the inherent challenge of finding these rare and beautiful creatures in the pockets between our ever-expanding civilisation.

“I’ve been fixated upon wildlife ever since I was a small child,” Miriam says. “But what really appeals to me is the challenge of finding species that are difficult to see and know, and getting close to them. Owls and otters are nocturnal, and incredibly elusive and difficult to find, so I’ve tried to bring them into the consciousness of people. And I want to bring people into the encounter, into the experience of what it feels like to get close to them.” 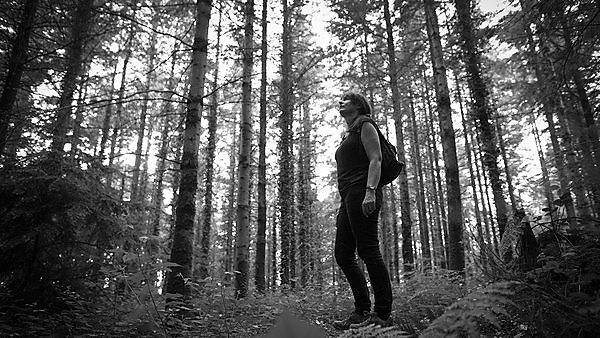 “A flicker caught my eye, Finally after all this time, out of the gold of the grass came a pair of long wings, laden with all the browns and ochres of the moor, the darkness of bramble and old deadwood and winter bracken, the sepia and gold of the grasses. As it shimmered past I turned to see it hover a little, its wings in a v-shape, the pale circle of its face pointing downward. Aiming into the flax-blond grass and the tangle of lichens and wizened furze it dropped vertically and vanished. I felt that was it, but when it came up again I didn’t need the binoculars. Asio flammeus, the flame-eyed owl.” Owl Sense p207.

Over the course of Owl Sense’s eight chapters, Miriam searches for those encounters with different species – from the Tawny owl, the most common breed in the country, to the giant Eurasian Eagle owl, a creature so awe-inspiring that it’s been known for gangsters to keep them as status symbols. It’s a journey that takes her around the country and further afield to the forests of Finland and Serbia, considering the species' ecological significance as an apex predator, as well as its cultural iconography.

“There were three I did not see,” she says. “I never saw the Great Grey Owl in the wild. I never saw the Hawk Owl, which resides in the same place in Finland. And I never saw the Snowy Owl, which is a rare vagrant in this country. They are my Grail. To be able to look into those golden yellow eyes is like looking into the spirit of the Arctic. I’m still after it.”

Our path takes us deeper into the woods, the setting sun filtered through the foliage of the surrounding redwoods, beeches, conifers, chestnuts, and many more species besides.

“Owls like to roost in mature trees,” Miriam says, looking skywards to the canopy. “They like lots of ivy and to be out of sight – other birds will mob them if they see them.”

We’re being mobbed ourselves, by a swarm of midges, with several huge mosquitoes at the vanguard of the assault. It’s an occupational hazard for Miriam, but one she has grown accustomed to over many years of exploring the outdoors. Hailing from a family of biologists, it’s no mere biographical liberty to suggest that Miriam was destined to make a name for herself in the field. In particular, there was the influence of her grandfather, an eminent evolutionary geneticist whose house was an 'Aladdin’s cave of skeletons, fossils, snake skins and bears’ teeth'.

“I used to love going to visit,” she says. “There was this one day when he gave me an otter skull to hold, and he explained to me the evolution of this amazing predator that had been here for millions of years – far longer than humans. When I discovered this skull belonged to a creature that was once prevalent in our landscape and now was nearly gone – they had been poisoned almost to the verge of extinction, post-Second World War – it really lit my imagination. I wanted to go out and find one, but you just couldn’t.”

Well, not immediately, anyway. But in time, after a 12-year career in secondary school teaching that took her from her home in Sussex to the Isles of Scilly and then to Totnes in Devon, Miriam began to look in earnest. By 2008, she was a published poet, having released her collection, Windfall, and taken the leap to become a full-time writer. And her first step was to contact the University of Exeter to pitch the concept of a book that would see her travelling around Britain in search of the otter. They were immediately receptive to the idea, and much to Miriam’s surprise, offered her a funded PhD. 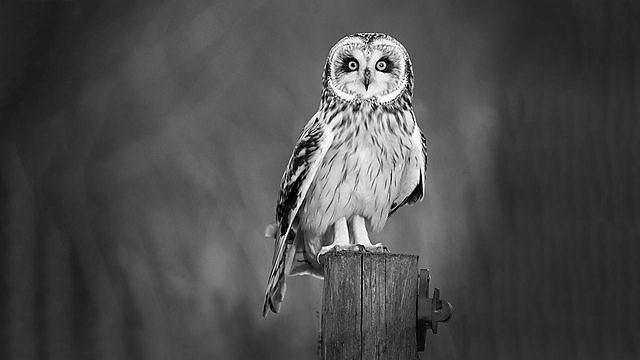 Choosing her favourite otter haunts – among them, West Wales, Devon and Cornwall – Miriam found people who could help her track the animals, learning from them the skills she needed. Among them was James Williams, a former otter hunter turned avid conservationist, who taught her to identify otter spraint, tracks, and habits.

Two encounters, above all others, have stayed with Miriam. The first occurred on the west coast of Scotland, when she was staking out a known area for otters, close to the shoreline.

“It was midsummer, and I’d woken up in my camper van at about 3am and it was light,” she recalls. “And I heard this tremendous crunching sound, and thought ‘what on earth is that?’ I looked out and it was an otter eating its way through a crab. They don’t have very many table manners – splinters flying everywhere. It ate the whole thing, licked its lips and went back off into the water. And that for me was unforgettable; it was a good omen for the rest of the book.”

The second happened in Northumberland as Miriam was camping in the dunes at another otter location, sheltering in a bivvy bag as her camp fire whickered out.

She says: “There was a gentle thump by the embers of the fire. This incredible owl had just landed and it was looking at me, probably more surprised than I was. It had this white facial disc, black eye mask, and bright yellow eyes, and I thought it wasn’t real; it was supernatural. I’d never seen an owl in this way. It happened to be a Short-eared Owl, which migrate from Scandinavia. That owl burned itself into my eyes and I knew that I had to find out more about this creature and that it would be the subject of the next book.”

The miles on the road became words on the page, and once three chapters of Otter Country were written, Miriam’s academic supervisors began gently pressuring her to send it to an agent. She resisted at first, but finally relented to their insistence, and within three hours, the phone was ringing. Publishers lined up for the rights, with Granta bidding highest, and releasing it in 2012, several months before she secured her PhD.

Miriam, a graduate from Sussex University, immediately began to look for an academic post, and was quickly snapped up by Plymouth to join its English and creative writing department. And it has been in these surroundings, with Dartmoor as an inspirational backdrop, and her students and colleagues as professional companions, that Owl Sense, and the next chapter in her career, have taken flight.

“What I love about being a writer and working with students is that I am learning about my own writing all of the time,” she says. “It’s being a member of a writing community, in a collegiate atmosphere. I tell the students, ‘don’t overwrite, don’t put too much flowery language in there’, and then I go back and look at the article I’ve written for The Times and think ‘oops!’. Sometimes I bring my draft Nature Notebook column in to share with the students so they can edit it themselves. It is fascinating to watch how they can learn to professionalise their skills in this way."

“And it's a real privilege in my own research to encounter and work with people who are battling at the front line of conservation. What my work does is make a bridge between the sciences and the humanities. I’m trying to popularise, and draw in people who perhaps wouldn’t otherwise understand the science.”

It’s a motivation that has seen Miriam become a passionate writer for The Times as one of the regular Nature Notebook columnists, and she is also working with the University of Plymouth, City Council and Devon Wildlife Trust on a project to establish a Plymouth Nature Festival by the summer of 2019. And earlier this year, she was invited to be part of the Arts and Humanities Research Council-funded project called Land Lines: British Nature Writing, 1789-2014, which sought to identify the UK’s best-loved book on wildlife or the outdoors.

As we finish the interview, Miriam snaps to attention. Gesturing into the darkness, ear cocked, she says, “That’s a baby Tawny Owl!” Somewhere deeper in the wood, there’s a faint raspy call – “like a knife being sharpened on a whetstone,” as she describes it in her book.

It’s the closest we’ve come to our own encounter – but we’ve certainly been in the presence of an owl. 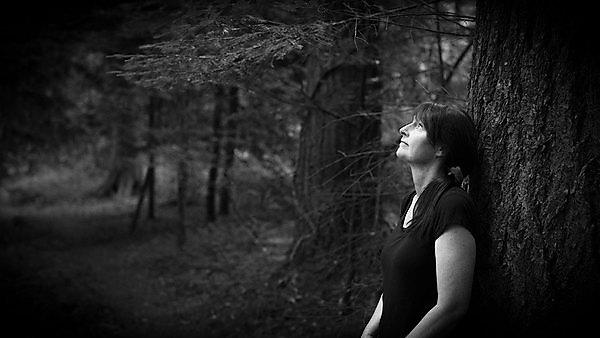