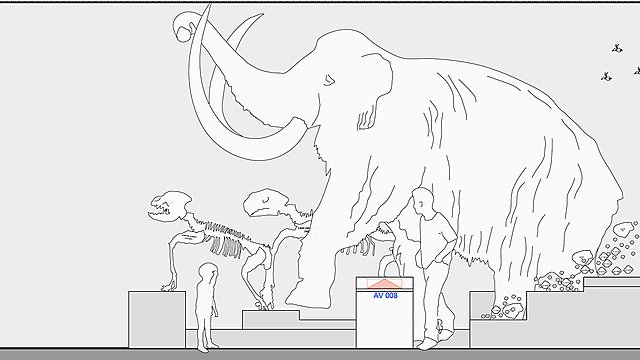 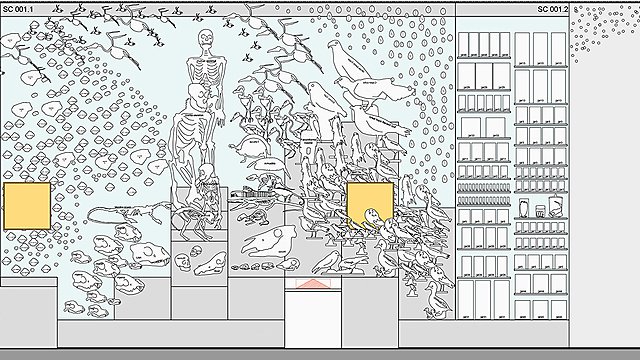 The development work for Plymouth’s new £37 million history centre project, The Box, is under way. But what does this transformational and ambitious project mean for the city – and the University campus in which it effectively sits?

On the wall of St Luke’s Church overlooking Tavistock Place is a distinctive outdoor pulpit. Installed in 1913, it was once used by clergymen to take their sermons to the street, preaching to the passers-by and the passengers on the trams that rattled along what was then the arterial route to the north.

More than a century later, St Luke’s is hived off behind the hoardings that herald the development of the city’s new history centre, The Box. But that legacy of performance is set to find a new stage in the form of a piazza that will be home to street artists and musicians, and the ethos of the project itself, which promises to reach out to the wider city through a network of historical sites.

“What is distinctive about The Box is the spirit of connection,” says Professor Dafydd Moore, Executive Dean of the Faculty of Arts, Humanities and Business, and the University’s lead representative on the project. “It is about moving people, mentally and physically, to other places such as Smeaton’s Tower or the Elizabethan House. It is about allowing Plymothians to reconnect with the history of their city as a whole, and allowing visitors to make sense of the rich historical landscape they are visiting when they spend time in Plymouth.”

It might appear to be counter-intuitive for a flagship development to be focusing on sending people away from its centre, but as Paul Brookes, Interim CEO of The Box makes clear, this is not just a new gallery and history centre under construction, but a new way of thinking about Plymouth’s cultural heritage – and its future.

“The possibilities are limitless,” he says. “What began life more than a decade ago, as a project to find a new home for the city’s archives, has become something that has no real equivalent in the country: the integration of different disciplines, of art, archives, exhibition, and performance, into a unique cultural offer.”

Drawing upon his extensive national experience in the public arts realm, including working on the Cultural Olympiad of London 2012, Paul has the responsibility of steering the project, which in a physical sense, is focused upon the transformation of the City Museum and Art Gallery, St Luke’s Church and Tavistock Place. And with the support of its four principal partners: Plymouth City Council, the University, the South West Film & Television Archive, and the South West Image Bank, it has secured funding from a variety of sources, most notably, the Heritage Lottery Fund (£15.8 million), the Arts Council (£4.2 million), the Coastal Communities Fund (£2 million), and Plymouth City Council (around £14 million).

The City Museum and Art Gallery will undergo the most extensive redevelopment, with a new front entrance opening out onto the piazza, and eight permanent galleries, including one focused upon the development of the Port of Plymouth, and another on ‘100 iconic journeys’, from Sir Francis Drake to Sir Francis Chichester. In addition to these permanent fixtures, there will be a range of visiting exhibitions, programmed in conjunction with the University’s Peninsula Arts, which could include contemporary responses to some of these historical themes, or collections loaned from other major galleries such as the V&A or the Tate. 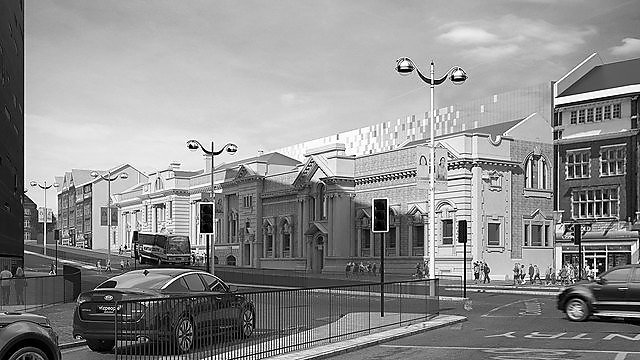 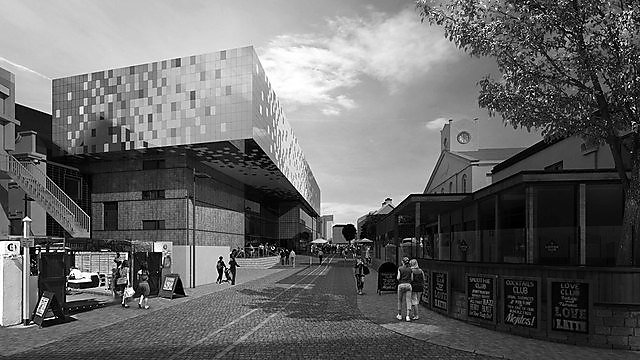 Six of the city’s major heritage collections will be brought together – the Plymouth and West Devon Record Office; the South West Film & Television Archive; the South West Image Bank; the Local Studies and Reference Collection; the Figureheads collection from the Devonport Naval Heritage collection, and the City Museum and Art Gallery‘s significant art, human history and natural history collections – and there will also be open and invigilated research areas, where students or members of the public can request archives from a facility known as ‘the box in the sky’.

Equally profound will be the effect The Box has upon the surrounding area, defined as far back as the Abercrombie Plan as the cultural quarter for the city. With people able to pass from campus to piazza and back again, progressing through the grand atrium of the building, there will be a significant change to the way footfall flows around the area. 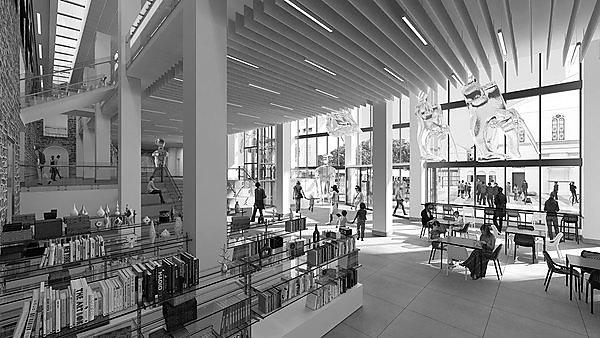 “The space will be a catalyst for continued regeneration of that part of the city,” says Paul. “In fact, it has already begun, with the creation of a 24-hour café society and the expansion of some of the businesses. We will be improving the road network and crossing facilities, because we envisage this becoming an important destination for visitors and locals alike.”

“I think it’s an opportunity for us to reconceive our campus,” adds Dafydd, providing the University perspective.

“It is far more profound than simply having a new development on the edge of it – it will fundamentally change the campus and we should be really excited about it. We will have a world-leading venue, which is going to pull in lots of people, many of whom will explore the University.”

And that element of exploration extends outwards, through the neighbouring galleries at St Luke’s – which, once the work is finished, will be the largest GIS-standard gallery in the region, capable, for example, of hosting a future Turner Prize.

“Our shared vision is that whichever venue you visit, whether it's the University's gallery, the main Box galleries or St Luke’s, it will feel like it belongs to a single cultural entity, albeit each venue will have its own distinctive flavour,” says Dafydd. “Think of the South Bank: different things happening in different venues but a real sense that you are visiting a place where lots is going on in a concerted fashion.”

The closer integration of the Peninsula Arts programme is one of three major strands of work being undertaken in collaboration with The Box. The University will be allocated a sizeable teaching room on the first floor of the museum, which will also be ideal for events, conferences and public engagement (“We will have a real presence there,” says Dafydd). And from 2018, before The Box even opens, the two institutions will also launch and run an innovative, possibly unique, MA Archival Practice, one that is already catching the attention and imagination of the likes of the National Archives.

With a target completion date of spring 2020, in time for Mayflower 400, the focus is already moving towards the medium term, and a goal of becoming a fully sustainable not-for-profit company within two years of launch, in a venue capable of attracting 250,000 visitors each year.

“In order to do that, we need to be able to surprise people,” Paul says. “We want them to come back again and again, and that's where our connections with the likes of the Tate and the National Portrait Gallery – and the international ones we are looking to establish, particularly in the United States – will be important.

“But this project is also about civic pride,” he goes on. “Look at how much Liverpool loves its museum. That is a shining example of how your local people can be your best ambassadors. The original museum and art gallery was around for 100 years. Where will The Box be in 100 years’ time? The hope is that, whatever it is, it will be continuing to surprise us.” 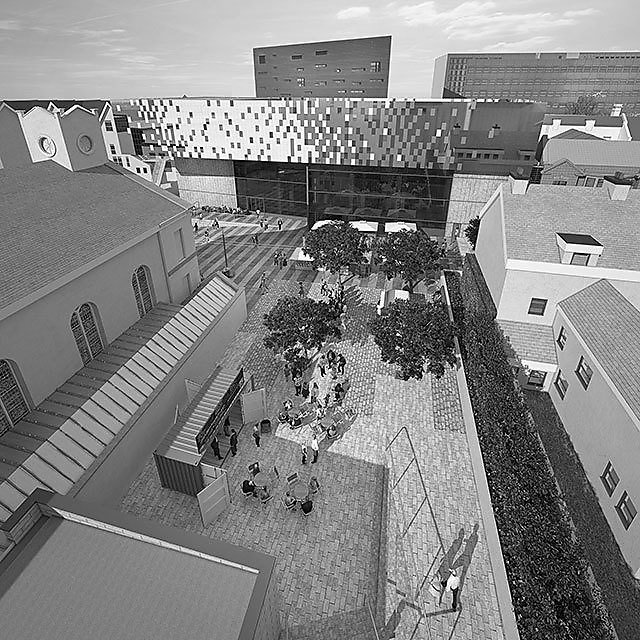 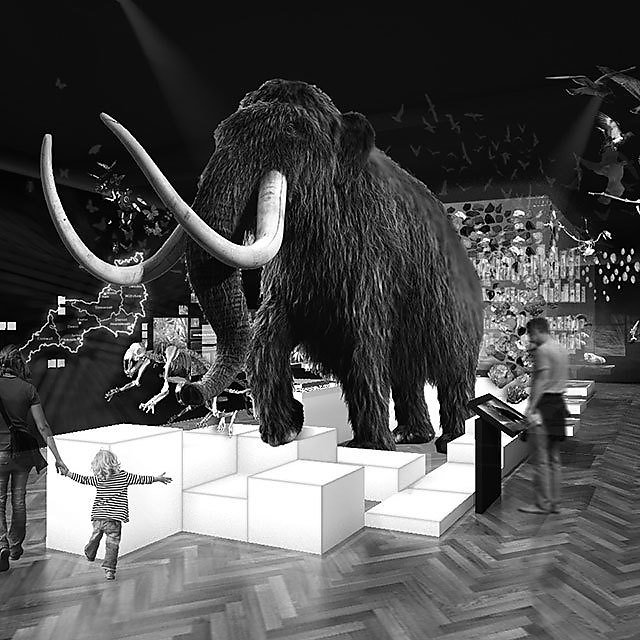 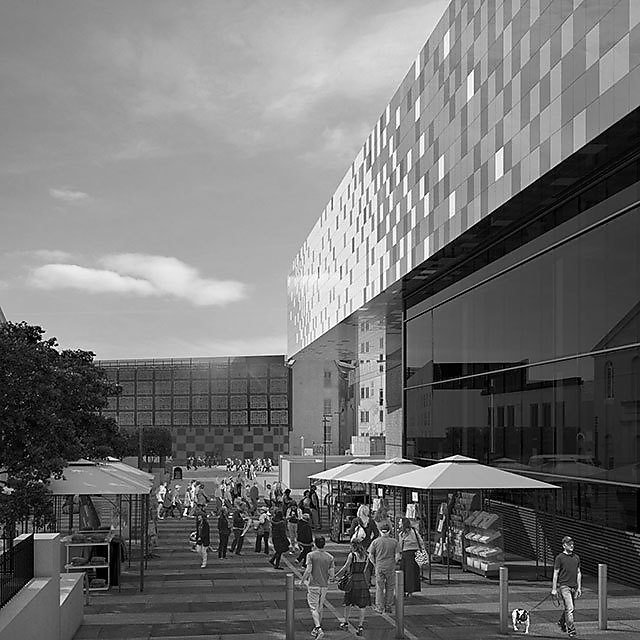