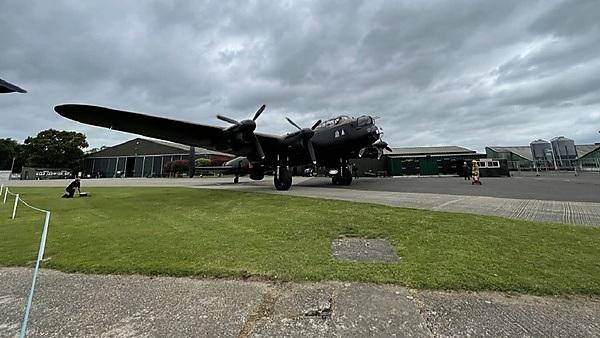 Save event
Alex Halls examines the importance of camaraderie to RAF airmen in Bomber Command during the Second World War in this free lecture as part of the RAF Museum's Research Lecture Programme. The lecture will be broadcast live from the RAF Museum, Cosford. If you would like to support the RAF Museum, you can make a donation via their website here.
The lecture looks to provide an understanding of the importance of camaraderie to RAF airmen in Bomber Command during the Second World War. The task of bombing Germany and occupied Europe was incredibly dangerous, with a 46% death rate by the end of the war. However, morale was consistently high, with only rare occasions of psychological stress and breakdown.
This lecture outlines that camaraderie between aircrew was an important factor in maintaining this morale. The five to seven volunteers who formed a bomber crew were often complete strangers, coming from across the UK or the colonies. By the end of their tours, these men were often bonded together, and in post-war years, many veterans have cited that they would not have survived without this cohesive relationship.
Alex will cover how bomber command aircrews were formed and explore the feelings of the men when these crews were brought together for the first time. He will also cover how a cohesive relationship in the air ensured operational efficiency, often allowing crews to survive attacks from flak or night-fighters, through effective communications. To contrast this, examples of poor aircrew communication and relationships will be discussed to highlight the issues this caused for morale and operational efficiency.
The lecture will also discuss the effects of crew separation through illness, early tour completions, promotion, or transfer, and how this impacted on overall crew morale. Often many airmen would only be willing to return for second tours if the rest of their crew were joining them, and this highlights the importance of these relationships to the morale of the command, as well as their willingness to carry on.
Finally, Alex will cover superstition in the RAF, exploring how individual ‘odd-bod’ airmen, and those who were deemed a jinx, were treated.

Register for the lecture

About the speaker
Alex Halls is a PhD student at the University of Plymouth. His thesis aims to provide an examination of how public morale and opinion influenced RAF Bomber Command’s strategic bombing campaign during the Second World War. His confirmation of route to PhD is due to be completed in December 2021.
Alex finished his undergraduate history degree at the University in 2020 with first class honours. His undergraduate thesis explored how the Dunkirk evacuation influenced the policies and tactics of RAF Fighter Command before the Battle of Britain and was shortlisted for the RAF Museum’s 2020 undergraduate prize.
In March 2021, Alex was invited to give a paper for Plymouth City Council as a part of the Plymouth Blitz 80th anniversary commemorations. This examined the development of strategic bombing, covering the origins during the First World War, how the bombing campaign developed through the blitz, and how bombing ultimately fell out of favour after Dresden (a copy of this talk can be found on YouTube).
Alex works part time in events planning for the National Trust at Antony House, Torpoint, Cornwall, and specialises in sharing information about the Plymouth Blitz and the development of the bombing campaign to visitors.
Previous September 2022 Next