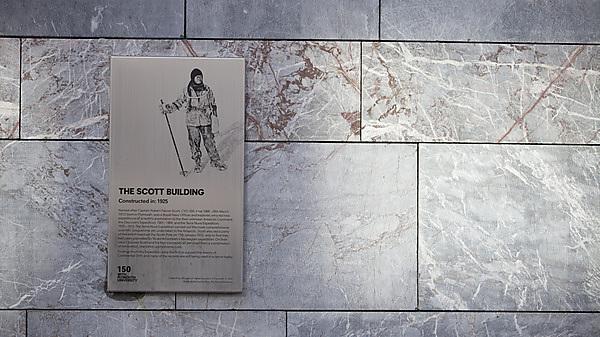 2012 marked 100 years since one of the most courageous deeds in our nation's history of exploration.

Captain Robert Falcon Scott and his Terra Nova Expedition team bravely walked across 800 miles of snow and ice to the South Pole, reaching their destination on 17 January 1912. Sadly, tragedy struck during their return journey and they perished in the cold wasteland as they ran out of food.

Scott was born and educated in Plymouth and to mark this important anniversary, University of Plymouth unveiled its Scott Building plaque on 23 March 2012, the first of many building plaques to be unveiled as a part of the University's 150th anniversary celebrations.

The plaque was unveiled by Nicola Starks, the granddaughter of Captain Scott, after a small gathering which included other descendants of the Terra Nova expedition, who had earlier attended the Scott Memorial Rededication service at Mount Wise, Devonport.

The illustration on the plaque was created by Samuel Hickson, a BA (Hons) Illustration student from University of Plymouth.