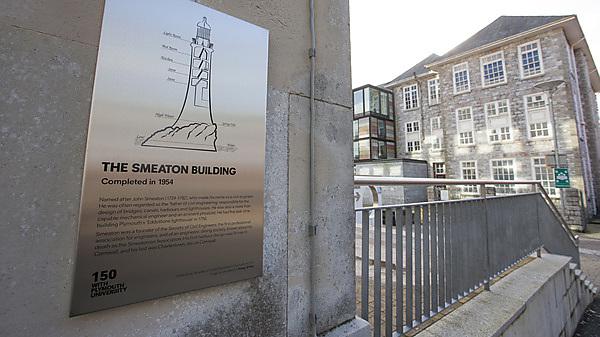 One of the legacy projects for the 150 anniversary is the design, development and installation of building plaques for those buildings on campus that are named after famous individuals that have a connection with the city/region. The plaques were mounted in the most visible position on the building for all audiences, staff, students and the community.

The installation of the plaques took place in tandem with the planting of 15 trees (one for each decade) marking international partnerships, the launch of a new 'campus trail' including reference to the plaques, trees, art and geology as well as history and general University plaques.

Plaque on the Babbage Building

Named after Charles Babbage (1791-1871) an English mathematician, philosopher, and mechanical engineer who originated the idea of a programmable computer.

Babbage attended school briefly in Totnes. He had a family home in Teignmouth and married there in a local parish church. He was the first to call himself a civil engineer (in contrast to military engineer). He was a Lucasian Professor of Mathematics, had financial support from the government for developing his differential engine and among other things was a cryptographer.

Named after Isambard Kingdom Brunel (1806-1859), a civil and structural engineer.

Brunel was the engineer and designer of the Great Western Docks (c1847) in Millbay, Plymouth. He was also engineer to the South Devon Railway from Exeter to Plymouth, for which he designed and installed the (ultimately unsuccessful) atmospheric railway propulsion system on the stretch from Exeter. For Sutton Harbour, Plymouth he designed a floating basin with locks gates (1845), though it would be a century and a half before it would be built (c1995).

Brunel designed the Royal Albert Railway bridge across the River Tamar which was completed a year after his death.

Named after Charles Hayne Seale-Hayne Privvy Counsellor (1833–1903) who was a British businessman and Liberal politician. Called to the bar in 1857, Seale-Hayne was Liberal MP for Ashburton, Devon, from 1885 until his death in 1903.

He served under William Ewart Gladstone and later the Earl of Rosebery as Paymaster-General from 1892 to 1895 and was appointed a Privy Counsellor in 1892. Apart from his political career he was also the first Chairman of the Dartmouth and Torbay Railway. After his death, his legacy funded the establishment of Seale-Hayne Agricultural College at Newton Abbot, now merged with University of Plymouth.

Named after the well-known 18th-century Quaker entrepreneur and chemist William Cookworthy (1705-1780), who among other things discovered china clay in Cornwall, and made the first true English porcelain in his factory in Plymouth.

Cookworthy was born in Kingsbridge and was an associate of John Smeaton who lodged at his house when he was engaged in the building of the third Eddystone Lighthouse (1756-1759). Cookworthy helped him with the development of hydraulic lime which was essential to the successful building of the lighthouse.

He was self taught for a career in medicine and chemistry. As professor at the Royal Institution in London his lectures attracted audiences of 1,000. He was especially interested in electro-chemistry. Highly regarded for his investigative research and many discoveries, he received many honours including a baronetcy. He is popularly known for inventing the miners’ safety lamp in 1816. Davy was born near Penzance and was a founding fellow of the Zoological Society of London.

Named after Admiral Robert FitzRoy (1805-1865), the captain of The Beagle, the ship that carried Charles Darwin on his famous voyage from Plymouth in 1831.

Captain FitzRoy was fundamental to Darwin’s quest and it was at his invitation that Darwin joined The Beagle for its journey around the world that allowed the young naturalist to carry out the research that would later form the central premise of On the Origin of Species.

FitzRoy was also a pioneering meteorologist who made accurate weather forecasting a reality through his role as meteorological statistician to the Board of Trade, which was later to become the Meteorological Office.

FitzRoy was a governor of New Zealand and creator of ‘FitzRoy’s storm barometers’ which saved the lives of many small fishing communities around the British Isles.

Named after Dame Barbara Hepworth DBE (1903–1975) an English sculptor. Her work exemplifies modernism and along with her contemporaries in England such as Ivon Hitchens, Henry Moore, Ben Nicholson, Naum Gabo and others she helped to develop modern art (sculpture in particular) immeasurably.

Hepworth was born in Yorkshire and trained at the Royal College of Art in London. She was a leading member of the St Ives, Cornwall art colony where she lived and worked from 1939. Her home and studio now form the Barbara Hepworth Museum.

Named after Nancy Astor (1879-1964), who was the first woman to serve as a member of the House of Commons. She was MP of Plymouth Sutton between 1919 and 1945. The Astors were hugely generous with their wealth. They gave buildings, land and money to the city of Plymouth. They financed the first hall of residence, Astor Hall, in the Stoke area of Plymouth in 1929 to accommodate science and technology undergraduates. 3 Elliot Terrace, where the King and Queen stayed in a visit during WWII, was among the gifts and is now the official residence of the Lord Mayor of Plymouth.

The Portland Square Building sits on the east side of the former Victorian square and preserves that name now that the square is lost under the modern University buildings. On the night of Tuesday 22 April/Wednesday 23 April 1941 a section of the public air raid shelter situated in Portland Square took a direct hit from a German bomb. Seventy-six men, women and children perished in what became the biggest, single civilian loss of life in Plymouth during the Second World War.

The Portland Square Building accommodates the University of Plymouth Faculty of Medicine and Dentistry, the Faculty of Health, Education and Society and the Faculty of Science and Technology. It has three large state-of-the-art lecture theatres, as well as a ground floor café and is also home to the Cube³ Gallery.

Completed in the late 1920s

Originally a bank, the building is named after the famous artist Joshua Reynolds (1723-1792), who was born in Plympton, on the outskirts of Plymouth. Reynolds was the leading English portraitist of the 18th century. Through study of ancient and Italian Renaissance art, and of the work of Rembrandt, Rubens and Van Dyck, he brought great variety and dignity to British portraiture. Reynolds was born the son of a headmaster and fellow of Balliol College, Oxford, a more educated background than that of most painters. He was apprenticed in 1740 to the fashionable London portraitist Thomas Hudson, who also trained Joseph Wright of Derby. He spent 1749-52 abroad, mainly in Italy, and set up practice in London shortly after his return.

Roland Levinsky, an internationally renowned immunologist, performed the UK's first successful children’s bone-marrow transplant at London’s Great Ormond Street Hospital in 1979 and was one of the first UK scientists to obtain funding for gene therapy clinical trials for treating children with immunodeficiency conditions.

A great teacher and mentor who lectured internationally and co-authored many important research papers, as well as editing several books on immunodeficiency diseases. As Dean of the Institute of Child Health in London, Professor Levinsky transformed the organisation into a top-class research institution. On appointment as Vice-Chancellor to the University of Plymouth in 2002 he began building a strong university centralised on a single site, enabling the arts and sciences to interact with each other.

This building, designed for community as well as academic use, has had a significant impact on the subsequent transformation of the University and its role at the heart of the creative development of the city. Professor Levinsky was dedicated to the needs of the individual student and passionate that everyone should have the opportunity to reach their full potential whatever their area of study.

The Rolle Building takes its name from the Rolle family, long associated with Exmouth, Devon, and the name originally adopted by the School of Education at the University. It was the Rolle family that attracted wealth to the East Devon seaside town, by developing the docks and through ship building. To commemorate the generosity these families had shown to Exmouth, the teacher training college founded there in 1946 in Douglas Avenue, was in 1951 renamed Rolle College.

The Rolles were liberal patrons and spent much of their wealth on churches, chapels, assembly rooms and municipal buildings, also providing gas, electricity and water supplies throughout the town. This benevolence was continued by the family's descendants, the Clintons throughout the 20th century.

Named after Captain Robert Falcon Scott, CVO (6 June 1868 - c29 March 1912) born in Plymouth, was a Royal Navy Officer and explorer, who led two expeditions of scientific exploration to the then unknown Antarctic Continent: the Discovery Expedition, 1901-1904, and the Terra Nova Expedition, 1910-1913. The Terra Nova Expedition carried out the most comprehensive scientific programme yet undertaken in the Antarctic. Scott also led a party of five which reached the South Pole on 17 January 1912, only to find they had been preceded by Roald Amundsen's Norwegian expedition. On their return journey Scott and his four comrades all perished from a combination of exhaustion, starvation and extreme cold. Findings from this Expedition were the first to support the theory of Continental Drift, and many of the records are still being used in science today.

Named after John Smeaton (1724-1792), who made his name as a civil engineer. He was often regarded as the ‘father of civil engineering’ responsible for the design of bridges, canals, harbours and lighthouses. He was also a more than capable mechanical engineer and an eminent physicist. He had the task of re-building Plymouth's 'Eddystone lighthouse' in 1756.

Smeaton was a founder of the Society of Civil Engineers, the first professional association for engineers, and of an engineers’ dining society, known since his death as the Smeatonian Association. His first harbour design was St Ives in Cornwall, and his last was Charlestown, also in Cornwall.