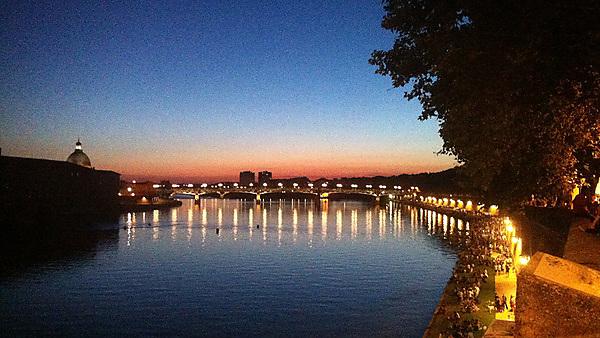 A placement is a compulsory part of my course, which is what originally drew me to it. I decided to study abroad and the University of Plymouth Business School helped me find my placement and nominated my application.

I went to Toulouse in the south of France as the city looked so nice, it was somewhere I had never been before and the climate was much better than in England!

My course at Toulouse Business School (one of the best academic business institutions in France) was taught in French, which really helped develop my confidence in speaking it.

I studied on a Masters in Management program for a year, which covered a range of modules including Economics, Marketing and Human Resources.

Studying in Toulouse was one of the best experiences I’ve ever had. I learnt so much and got to explore a foreign city.

I was able to visit Paris and Barcelona, and I went skiing for the first time, in the Pyrenees.

I made great friends during the year and now have a network of contacts across the world.

I would recommend studying abroad to anyone – you can learn a language, travel, make new friends and it all looks great on your CV.

I travelled from August 2013 to March 2015 with ISEP (International Students Exchange Programme).

I fell in love with the state of Indiana watching the US television show Parks and Recreation, so on a whim I applied to the only school in the state and ended up at Butler University in the city of Indianapolis. I was on a study placement for my whole second year. While I was out there I met and became friends with, a designer at a local software company.

He said I should interview for an internship, and I started as a design intern in January of 2014. In May of that year, my Creative Director at the internship asked if I wanted to stay on full time. With only three weeks to go, we rushed the visa paperwork and got an extension, and I did my work placement in Indianapolis too.

The experience was simply incredible. I had a chance to explore a whole new continent, from the bustling, noisy New York City, to a quiet fishing town near San Francisco.

Everyone I met was really friendly. I met a friend’s parents and within fifteen minutes they had invited me over to their house for Thanksgiving. I was in a dorm with both International and US students, so despite being nearly 4,000 miles away, I was watching French and German movies, sharing Tim-Tams with Australians, and drinking Moroccan tea, all while absorbing the local culture.

I’ve now got a network of friends all over the US, and a sofa to sleep on in most major cities around the world!

Academically, studying abroad has given me new perspectives on existing ideas. I’ve seen how a more open culture can lead to more collaboration, with more able students helping others improve. I was also able to take interesting classes that I would otherwise not have been able to take in Plymouth, on things like ‘Philosophy & Ethics of Computer Science’ and ‘Advanced Algorithms’.

Studying abroad is a really life-changing experience that opens your eyes to new ideas and cultures.

I went to Madagascar for almost two months with Operation Wallacea, a worldwide research and conservation organisation.

I helped Malagasy ornithologists to carry out bird point counts – surveying the species that were present in a remote area of dry deciduous forest.

I’m getting to study something I am really interested in, which helps a lot when writing a 10,000-word report, but collecting my data in Madagascar didn’t feel at all like hard work! I loved the experience and learnt so much while I was out there.

I felt like I was in a wildlife documentary every time I stepped out of my tent! It was a crazy, awe-inspiring adventure. Some things took a while to adjust to; like the bucket showers, long drop toilets and rice for every meal… But I loved the Malagasy culture and made many friends from all around the world.

I would definitely recommend doing a placement abroad, especially for dissertation projects.

You can learn so much about yourself as well as the country you’re in. I had a fantastic, productive summer that has provided me with many more useful skills for the future. I got to spend six weeks outdoors, trekking through forests.

I was encouraged by a lot of the lecturers on my course to go out and do a summer placement to enhance my studies and improve my fieldwork knowledge.

My dissertation supervisor helped me prepare academically to ensure I knew how to go about collecting and recording my data. I came back with all the data I needed for my dissertation, which took a lot of the pressure off in my third

I feel very proud of myself for taking the opportunity to embark on this project; it far-surpassed my expectations and has greatly enhanced my desire to continue travelling and go into a field of work that I really love.

I went abroad during my second year, studying at Western University in London, Ontario in Canada, through the University of Plymouth's direct exchange program. Canada was always somewhere I wanted to visit, and studying abroad allowed me to travel extensively around Canada and the USA, which meant I could make the most of the opportunity.

Going to a country that speaks English was also an important factor in my decision, as it made it much easier to make friends.

Western University is a well-regarded University in Canada, making it a very positive academic experience as well. All the modules that I took while studying abroad were similar to that of the modules I would of been doing at Plymouth, meaning I did not miss out on anything important during my second year. It also looks great on my CV, helping me to secure a placement for the optional placement year of my degree.

Studying abroad has strengthened me as an individual; I now approach any new situation with increased confidence and ease and feel comfortable talking to new people and in front of large groups.

The international office at Western also arranged many events for international students, which developed my cultural awareness and broadened my horizons.

Overall, studying abroad has enabled me to develop in maturity and vastly improved my ability to adapt to new and challenging situations, something that has been helpful throughout the rest of my degree and while doing my placement.

I had a lot of support from both lecturers and the exchange team at Plymouth while organising my study abroad year. Whilst in Canada, I had ongoing support from both the University of Plymouth and Western University, who were always willing to help and provide support when I needed it.

Without a doubt, studying abroad was the best experience of my degree. Getting the opportunity to live and study in a different country is invaluable, not just in terms of personal and academic development but also being able to experience a new culture. I had an amazing time. By joining the outdoor club at Western, I spent many weekends camping, hiking and exploring parts of Canada that I would never have seen otherwise. There are many benefits of studying abroad, and there is also additional student finance available, so there are no reasons not to go.