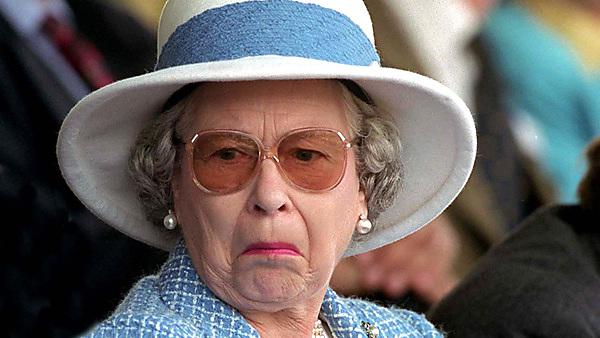 The Queen is turning 90 soon, and to mark the occasion Plymouth Illustration graduate Ollie Eskriett has provided a crest (pictured) for a commemorative online book, where well-wishers can leave messages. Christina Colwell, currently studying for an MA in Publishing at Plymouth, has been marketing the book throughout the Commonwealth.

A host of celebrities are on board to promote it, and everyone who registers can buy a specially-made commemorative charity medal, designed by Ollie. To mark the occasion, we take a look at some of the other, weirder, presents she’s received over the years…

If you saw a wine cooler shaped like a giant grasshopper that opened up to become a drinks table, would you necessary think of Her Majesty Queen Elizabeth II? President Pompidou of France did in 1972. Wonder if she ever used it?

Somewhere deep in the Buckingham Palace vaults there lies a presumably un-worn pair of cowboys boots, given to the Queen during a visit to the US in 1991. Unless she’s a secret line dancer, we can’t imagine they’ve seen much use.

We know that Queen Liz is a fan of corgis and that Buckingham Palace is a gigantic place, but what made the government of Cameroon think that an elephant was a good idea as a present? Sensibly, Her Madge gave the animal, named Jumbo, to London Zoo.

In 1947, our future Queen was sent 500 tins of pineapple as a wedding present from the Australian government. Who knows, they may still be gathering dust in the Palace larder…

A pair of sloths

Now the Internet’s second-favourite animal after cats, Brazil showed it was ahead of the curve in 1968 when the Queen returned from a state visit with a pair of sloths. Like Jumbo, they were soon passed on to London Zoo.

We can’t imagine this one owning a prime spot on the royal wall. In 1982, while visiting the Pacific island of Kiribati, she was presented with a scary looking sword made from sharks' teeth. Eek!

For the monarch who has everything, in 2011, horse owner Christina Patino offered to let one of the Queen’s prized mares, erm, hook up with her stallion, Big Bad Bob, who at that point commanded a stud fee of £5,000. Oh, to see a picture of the Queen’s face when that one was put to her.