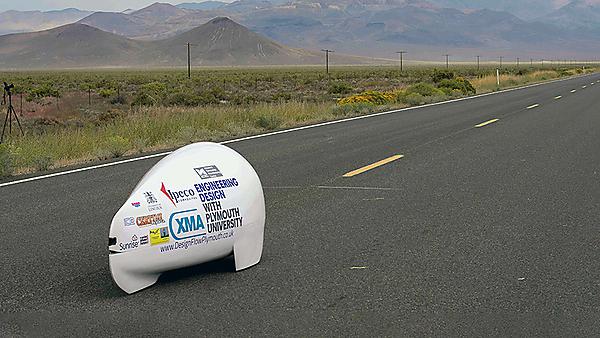 After missing out on last year’s title, a University of Plymouth team, led by Adam Kyte, a lecturer in Mechanical and Marine Engineering Design, are coming back fighting ahead of the 2016 World Human Powered Speed Challenge.

This unique and physically demanding cycling event will be taking place in September in Battle Mountain, Nevada (pictured), and after a year of fine-tuning, the Plymouth team believe they have a bike that’s capable of victory in both the male and female categories.

Take a look inside Beluga, the University of Plymouth's ingenious arm-powered handcycle for people with limited use of their legs, and discover the result of acute precision engineering, months of deliberation and many hours of testing. 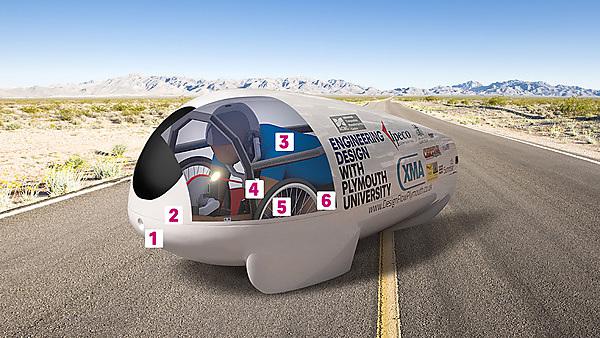 The bike’s streamlined dome is built from lightweight composite materials including glass fibre, carbon fibre and Kevlar, held within an epoxy resin. Students from the University of Plymouth, technicians and staff were all responsible for creating the structure using these specialised building materials.

The concept for the bike’s shell was formulated using computer-aided design software whilst the painstaking task of creating the initial shape of the mould fell to one particular student who had to fashion it from over 40 individual sheets of MDF.

All of this data is used to validate the team’s prior calculations as well as to make the tweaks needed to improve the performance of the bike or get more out of the rider.

To power the bike, a rider must sit crouched down with their torso over their knees. It’s a confined position, but making the bike as small as possible was vital to minimising aerodynamic drag – aerodynamics play a key role in producing the bike’s velocity.

A chest support adds to the rider’s comfort, while a tray, cast around the shape of the individual athlete’s legs, keeps the lower body in place. All of the power to propel the bike comes from the rider’s arms.

Many of the bike’s internal components were handmade at the University of Plymouth. The main frame is built from aluminium and sits alongside other standard, ‘off-the-shelf’ components like the gears and chain set, although, as you might imagine, there is some fairly high-spec technology involved, too.

For example, the gears are controlled electronically, much in the same way that an automatic gearbox works on a car.

The design for the bike’s unique cycle mechanism is the result of a combined and sustained effort by leagues of students at the University of Plymouth.

Just like the bike’s shell and structure, the final version came about after four years of development through engineering and design projects, final year dissertations and numerous group analysis sessions.

The wheels used on the University of Plymouth team’s bike are actually found as standard on recumbent bikes.
However, the mechanism developed to steer them is far from it.
The system was conceived and developed at the University and requires a rider to steer the bike using their head.
A sensitive pad either side of the rider’s helmet replaces a steering wheel. Instead of turning by hand, a small nudge of the head will point the bike in the required direction.

Chris Jones is an ex-serviceman who, after sustaining injuries during combat in the late 1990s, has limited use of his legs.

One of two riders, Chris’s contribution to the University of Plymouth effort is being supported by military charity Help for Heroes.

Sarah Piercy is a professional hand cyclist and wheelchair racer.

She won the 2000 London Marathon women’s wheelchair competition on her first attempt at just 19 years-old. Since then, she has competed in the London Marathon a further seven times. 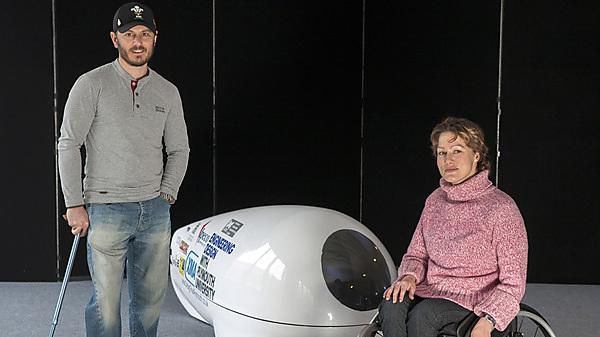