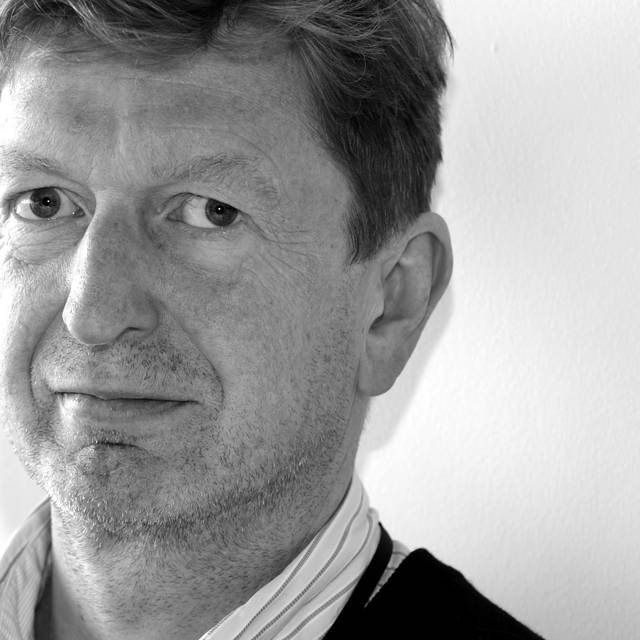 My previous professional practice background is primarily in brand and corporate identity strategy, design and management. The visual manifestations of these schemes vary from all types of printed and digital communications to moving image, illustration, environmental graphic design, wayfinding, exhibition design and vehicle livery. All of the latter outcomes dependant upon the nature of the client organisation, from a publisher to an airline, to a luxury hotel chain to an art gallery, to a theatre or a mass transit system. Therefore, I have a broad and in depth experience of designing, commissioning and teaching a wide variety of graphic design disciplines. Whilst at Plymouth I have used this experience to develop student projects externally and internally such as with the Business School and Marine Institute. More recently I developed live undergraduate studentprojects with the Met Office and IBM. The students’ ideas and work for a MetOffice Weather App are to be exhibited at their HQ in Exeter at the end of thismonth. The Future Cities project for IBM also involved organising an IBM/IDEO DesignWorkshop for students in Plymouth.

I graduated from the London College of Printing in 1982 specialising in information design, then subsequently worked in London for various internationally acknowledged design consultants including: Pentagram, Henrion Ludlow & Schmidtt, Banks & Miles, Interbrand Newell & Sorrell. I have managed and designed numerous communication design schemes, some of the notable projects I have worked on include the London Underground sign system and corporate identities for British Airways, Cunard and Faber & Faber. I have also written a lecture series called New Technology, New Typography given at the University of Westminster, National School of Art & Design Dublin, Middlesex University, London College of Printing and Surrey Institute of Art & Design. I have also been a guest lecturer at Musachimo Art University Tokyo and taught on a part-time basis at the London College of Printing and Central Saint Martins School of Art & Design. I have also lectured at the Estorick Collection of Modern Italian Art, for the exhibition: The Legacy of Avant-Garde Graphics 1918 - 1934.

In September 2003, I successfully completed an MA in Electronic Arts at Middlesex University, subsequently gained a postgraduate higher education teaching qualification in 2004 at the University of Plymouth after begining full-time employment as a Lecturer in Graphic Communication with Typography in 2002. In 2005, I authored and developed the MA Communication Design programme the latter now conflated into a new expanded MA Publishing programme. As Joint Programme Leader of MA Publishing I have contributed to the development and expansion of the programme to include specialist strands (Digital Futures, Design Commentary, Editorial Design and Illustration), through re approval process, subsequent programme planning, development, recruitment, marketing and management.

In 2009 I was accepted onto a PhD at the University of Plymouth and completed the MPhil-PhD transfer in September 2011. The latter is an investigation into and development of alternatives to the research methodologies used by contemporary Graphic Design, Advertising and Marketing professions that focuses on alternative forms market and target audience segmentation. This practice basedCommunication Design PhD, is an investigation into substituting MarketSegmentation with Pedagogic Segmentation, this has required the design anddevelopment of a series of prototype communications utilising traditional andleading edge technologies. The message but not the focus of the research is ahistory of the alphabet, in particular a history of A. The artefacts thatillustrate this history are all from the British Museum.

In Jan 2012 I was appointed as an External Examiner for the MA Design for Communication, Westminster University and in June 2014 I also completed a Visiting Research Fellowship at the Iceland Academy of Arts, undertaking a research sabbatical to investigate William Morris and Iceland.I have authored calls for papers and been a track chair at the last two European Academy of Design biennial conferences in Gothenburg 2013 and Paris 2015 (the call and the accepted papers published within the conference proceedings). As a co founder of the Message Research Group, Plymouth University, I also initiated and wrote the call for papers for the first Message,visual communication research journal of which I am co editor. Issue 3 is due to be published later this year. In 2014 my essay The Receiver is the Message? An investigation into substituting established forms of Market and Target Audience Segmentation with PedagogicSegmentation, (part of my PhD research) was published in the book Semiotics and Visual Communication. Concepts and practices, Cambridge Scholars.

Substituting established types of Market Segmentation with Pedagogic Segmentation
– a catalyst for change?

A PhD investigation into the effect onCommunication Design methodologies and outputs by substituting establishedforms of Market Segmentation (target audience groupings) with PedagogicSegmentation (models/approaches to learning and teaching).

The content of the communication (butnot the focus of the research) is a history of the Roman alphabet. An initialmotivation for the research is that the prescriptive use of existingCommunication Design research methodologies within Advertising, Graphic Designand Marketing, can often lead to clichéd and mediocre solutions. However coreto, or used in tandem with almost all established methodologies, is the use ofsome form of Market Segmentation or target audience grouping. I would maintainmy approach of radically changing a core component within these established methodologies:i.e. substituting Market Segmentation with Pedagogic Segmentation has not onlythe potential to act as a catalyst for the formulation and addressing of newCommunication Design criteria, but also to provoke new approaches,possibilities not only within established Advertising, Graphic Design andMarketing research processes and outputs but also within Pedagogy.

My aim is to create a range ofcommunications using the same core message, each message designed to address aparticular Pedagogic Segment as opposed to a Market or Demographic Segment. Theintention is to present and make accessible all communications simultaneously.To achieve this, I intend to create a series of exhibition pieces all basedaround the same core message, each piece designed to align to a PedagogicSegment and each piece communicating a history of the Roman alphabet - inparticular Acrophony. One of these pieces is likely to take the form of a 360 degreeImmersive Vision movie.

Acrophony is the transition from apictogram that represents an object, to a phoneme or letter that represents theinitial sound of the word used to name the object. For example the earlypictogram for Aleph (Ox) eventually develops into the Roman capital letter (phoneme)A. I would maintain the history of the Roman alphabet is a subject that has abroad ranging educational and cultural significance and consequently could, orindeed should be of interest to anyone that uses the Roman alphabet. Theartefacts that illustrate this history are all from the British Museum withwhom I hope to develop the project.

I am investigating William Morris’sexperience of and relationship to Iceland by developing contextual portraits ofa cross section of the people he met, became friends with and named in hisIcelandic Journals. This primary research will generate new material that maybegin to illuminate the impact on Morris of his Icelandic experiences whilstproviding material for Morris historians to further evaluate and develop.Particularly as almost all that has been written about Morris and Iceland hasused his Journals and/or the Sagas as the primary source as opposed to Icelanditself.

Morris’s Journals are now out ofcopyright therefore my intention is to bring together the results of myresearch and the text from the Journals into one coherent communication. Initiallythis has resulted in two exhibitions in Reykjavik at the end of my Visiting ResearchFellowship at the Iceland Academy of Arts, in the longer term a book publishedin the UK and/or Iceland.

Jones, P. (Jan - June 2014) - Visiting Research FellowIceland Academy of Arts, ReykjavikWilliam Morris and Iceland, an investigation into Morris’s experiences during his two trips to Iceland during the 1870’s. This has been a personal interest for the last few years and I have now formalised it into a research project.

Apr 2010 - exhibitor and curator
Message 32 exhibition, Peninsular Arts Gallery
Demographics: the audience is the message? An initial investigation of the potential of defining target audience groupings by the way people learn.

Jul 2008 - abstract and poster accepted, published and exhibited
New Views 2 Conference, London College of Communication
A through E: Demographics: the audience is the message?
Abstract and poster accepted for participation and exhibition in New Views 2, an international conference on the future of Graphic Design at the London College of Communication. Initial research into the development of alternatives to the research methodologies used by contemporary Graphic Design, Advertising and Marketing.

Jones,P. (2014) The Receiver is the Message? An investigation into substitutingestablished forms of Market and Target Audience Segmentation with Pedagogic Segmentation.Chapter in: Semiotics and Visual Communication. Concepts and practices,Cambridge Scholars.

Jones, P. (2014)The Audience is the Message?Paper given at: Making Connections – Collaboration in Research and Practice,King's College, London Jan 2014.

May 2012 - abstract,poster and paper - the 9th International Conference of the European Academy of Design, Porto, Portugal. What will be the effect on communication design methodologies, processes and outputs by substituting the established types of market segmentation, with the various categories used to identify the way people learn?

Nov 2011 - published paper, abstract and presentation, 1st International Conference on Semiotics and Visual Communication – from theory to practice, Cyprus University of Technology. The receiver is the message?Development of on ongoing PhD research. What will be the effect on communication design methodologies, processes and outputs by substituting established forms of Target Audience Segmentation with pedagogic theories, models and approaches of how people learn?

Aug 2008 - peer review
Intellect Publishing - Design Integrations
Refereeing and reviewing an unpublished manuscript: Design Integrations, the development and use of design research (particularly in relation to how designers collaborate with other designers and non-designers) in order to identify, map and establish design as a coherent discipline.

UK Graphic Design from the 1940’s to the 1990’s
Estorick Museum of Modern Italian Art, London
For the exhibition The Legacy of Avante-Garde Graphics 1918 - 1934.