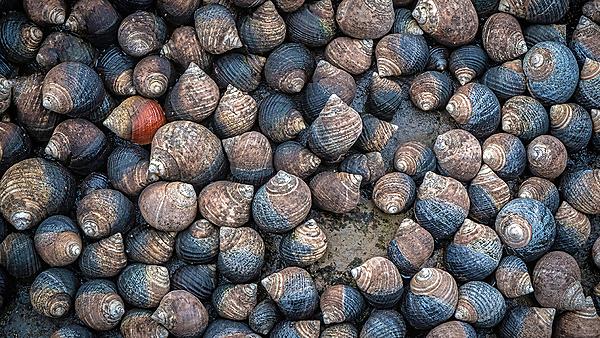 Animal personality is present in diverse taxa, but its underlying causes remain poorly understood. Personality is the most variable of traits, so why do individuals express only a subset of behaviours present in the population as a whole? One possibility that has received little attention is that personalities emerge from external constraints on behaviour such as infection by parasites which can influence behavioural change due to sickness or via direct manipulation of the host. This project will assess parasites as drivers of animal personality in a model host-parasite system.
This project will utilise an accessible host-parasite model system (Figures 1A-C), the common periwinkle (Littorina littorea), which is an intermediate host for a parasitic trematode (Cryptocotyle lingua), before final stage transmission in the European herring gull (Larus argentatus). New tools and analyses for modelling behaviour mean we can easily test predictors of between and within animal behaviour. In addition to resolving the contribution of parasites to personality, these tools can provide new insights into why infection alters host behaviour. For instance, host behaviour manipulation by parasites can evolve because it changes exposure to predation risk, either facilitating parasite survival (by making hosts behave in less risky ways) or transmission (by making hosts behave in more risky ways).
The aims of this study are: (a) To investigate the contribution of infection status to boldness and feeding behaviour of L. littorea relative to other variables assumed to explain animal personality including fitness traits, genotype and maternal condition (i.e. early environment). (b) To quantify the effects of infection on mean levels of behavioural (boldness, food choice), morphological (mass, shell structure) and performance (tenacity, i.e. resistance to dislodgement) traits and on the co-variances among them. These approaches will quantify the contribution of parasites to animal personality and provide functional insights of parasite induced behaviour change. 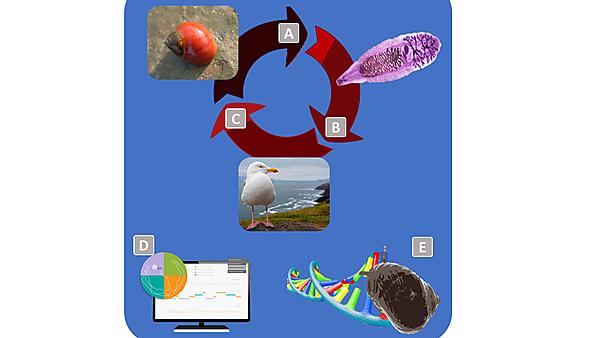 Figure 1: Parasites as drivers of animal personality. A) the common periwinkle (Littorina littorea) is an intermediate host for the B) trematode parasite (Cryptocotyle lingua), which ends up in the European herring gull (Larus argentatus) as the final stage host. This project will involve automated video tracking software (D) and DNA microsatellite genotyping (E).

Periwinkles will be collected from Plymouth Sound – the UK’s first National Marine Park. Animal behaviour and performance, e.g., boldness, food choice, tenacity, will be measured using standard published methods, and behavioural observations will be automated using video tracking software (Figure 1D). Parasite infection status will be manipulated via exposure to European herring gull (the final stage parasite host) guano and infection severity graded via visible colour change in the periwinkle. We will then use DNA microsatellite genetic analysis (Figure 1E) to establish the contributions of genotype or environment on infection susceptibility and behaviour change. Together, these data will provide valuable insights into how parasite infection drives host personality.

We are looking for a candidate with a degree in Biological Sciences (or similar) and an interest in understanding and communicating the impact of parasites as drivers of animal personality. The successful candidate will develop skills in behavioural experiments, observation software, image analysis, field work, evolutionary and ecological theory, tissue preparation, and advanced data analysis. Experience in or enthusiasm to learn these diverse sets of skills is therefore essential.