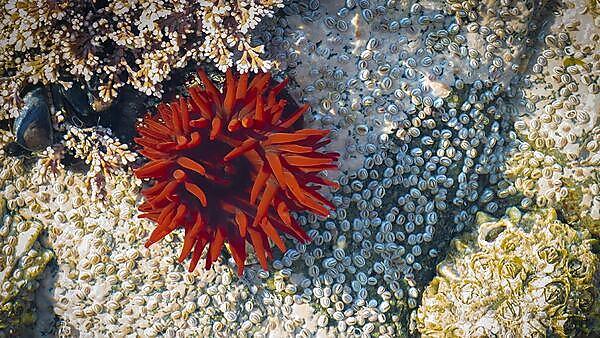 One of the major challenges to protecting the biodiversity of our planet in the face of climate change is gaining accurate information on biodiversity, with cryptic species providing a particular challenge. Organisms inhabiting the intertidal zone experience environmental stressors from both the aquatic and aerial environments they straddle. As such, intertidal communities are thought to provide an “early warning system” for the impacts of climate change, but our ability to monitor changes in these communities is hampered by our lack of knowledge surrounding the genetic diversity of their inhabitants.
The beadlet anemone Actinia equina is one of the most common cnidarians found along the British coastline, but despite becoming a model system for research across a wide range of fields, from behavioural ecology to pharmacology, knowledge about its basic biology is severely lacking. Once assumed to be a single species, A. equina is now thought to represent a cryptic species complex, but to date only one “cryptic” species has been identified in UK populations. There is incredible variation in body colour within A. equina - ranging from bright red, through to yellow, blue, green and brown - but the extent to which this variation in colour is genetically determined, and furthermore whether “cryptic” species within this complex can actually be identified based on their colour remains unknown.

This project aims to increase our understanding of intertidal biodiversity by systematically examining the genetic structure of A. equina populations along the South West coast.
The specific aims of the project are as follows:

This project will require a mixture of field and lab work. It will involve systematic surveys of A. equina populations along the South West coast and the use of survey software programmes to compile spatial distribution maps. The student will also conduct molecular and bioinformatics analyses using a variety of approaches, (including for example DNA barcoding) to identify new species and construct phylogenetic relationships. Behavioural and physiological experiments will also be carried out in the lab to characterise differences between morphs and species in response to a range of environmental stressors.

We are looking for a highly enthusiastic candidate with a degree in a relevant biological subject, who possesses significant interest in the field and relevant experience in molecular ecology. A positive attitude towards problem solving, independence and initiative are essential, experience with GIS mapping, R and bioinformatics is desirable. The successful candidate will be exposed to and trained in a variety of both standard and state-of-the-art skills. The student will also have the opportunity to become involved in research groups across the School, including , and .
If you wish to discuss this project informally, please contact Sarah Lane sarah.lane@plymouth.ac.uk.
Previous Next