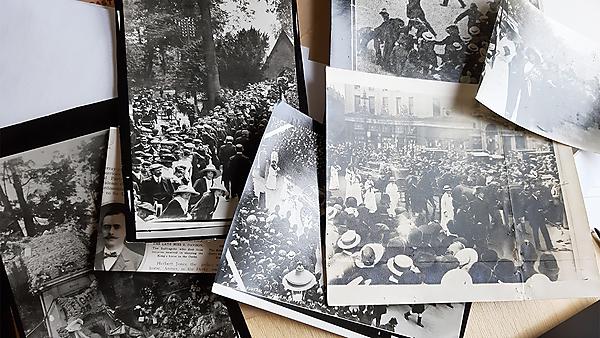 Through the work of academic researchers and our partnership with heritage stakeholders and professional organisations, CHEx is committed to creating an open access archive related to the research conducted by its members. This predominantly relates to oral history interviews and witness seminars that cover a wide range of topics. Current topics include:

CHEx is currently involved in collating the 25 oral history interviews that were conducted to mark the 50th anniversary of the Devon and Cornwall Police. These interviews profile retired officers who served in the periods both before and after the merger of the Devon and Cornwall constabularies in 1967 and will soon be available for research purposes as well as a teaching and learning resource.

A witness seminar that captured the fascinating memories and stories of seven former policewomen who served in Plymouth City Policewomen’s Department in the 1950s and 1960s, covering themes relating to the uniforms issued, training received, relationships with the public, operational duties and work undertaken.

This event comprised of two witness seminars that explored issues relating to the policing and prosecution of smuggling and profiteering in the South West through the recollections of those closely involved.

Post-Pace: Police and Policing in the South-West

This witness seminar collected the experiences, anecdotes and memories of former serving police officers and legal professionals to provide insights into the impact and effect of the Police and Criminal Evidence Act 1984 on local policing, police-community relations and policing practices in the south west.

Convict transportation was a long-standing feature of the English penal system, supporting the settlement of colonies and providing cheap labour. While sentences were generally for life, this changed in 1848 due to resistance in the destination colonies, especially New South Wales. After 1848, the number of prisoners sent to other destinations increased, including for example the Bermudas, Halifax or Western Australia, and sentences were for a fixed number of years. However, this latter period remains significantly understudied both in terms of prisoner experiences and lessons for today’s world. This project seeks to fill this void by taking an interdisciplinary approach. Working with colleagues from the University of Falmouth, Leeds and Hertfordhire, this project will use lifecourse histories and a range of different media to make experiences with the law come to life. the project aims to involve the general public and students in questions around forced relocation, migration and what this means in today’s world, using the public legal education expertise at UoP and Leeds Law Clinics as well as Bodmin Jail museum. It also explores lessons for modern penal policy and how tourism at these “dark history sites” can be ethically managed.

Research Project: The Challenge of Dark Heritage and Tourism in the South West.

This project explores the complexities involved in responding appropriately to the popular interest in visiting sites which are either totally or partially focused on heritage stories involving death, disaster and suffering. The responsibility of those in charge of such sites is a consideration for a range of visitor attractions, including museums such as Bodmin Jail. The questions being explored here link also to other CHEx ongoing research projects, notably that exploring the last two decades of convict transportation 1848-1868, but it has wider implications. Questions include the nature of the boundaries to be respected by those in charge of promoting tourism or providing access to such sites and the practical as well as emotional responsibilities of those involved in making ethical choices in relation to surrounding Dark Heritage and Tourism. The case study is provided by the expanded and revised Bodmin Jail heritage attraction, re-opening (lockdown permitting) in November 2020.

The project celebrates the notable women who have shaped modern Plymouth over the last century, from the first celebrations of the tercentenary of the sailing of the Mayflower to the plans for Mayflower 400. A Heritage Lottery-funded project, headed by the Hoe Neighbourhood Forum is working with Professor Judith Rowbotham from the CHEx group at Plymouth University and others from the local community to mark 100 years of Plymouth Powerful Women. We identify Plymouth Powerful women as those who are, at one level, ordinary individuals in the community who have become extraordinary because of their powerful local impact in a range of different ways.

The objective is to create a heritage trail around Plymouth which can highlight the locations and work of these women. To date, 92 noteworthy women have been added to the list, and they have been allocated to a range of thematic headings – including education, social service, politics (local and national), science, leisure activities and the law. Initial research has been completed by Judith on over 50 of these outstanding figures. Sadly, due to lockdown, intended research using the resources of The Box has had to be postponed and the celebrations for Mayflower 400 have shifted in nature. As a result, plans for community input and consultation to highlight the top 30 names in popular estimation have also been postponed and instead, using a small virtual committee drawn from the Hoe Neighbourhood Forum, Environment Plymouth and Bowater Communications, working with Judith, Professor Emerita Kim Stevenson and some University students, an initial list of Powerful Women has been drawn up, one focusing on the Hoe area and its surroundings. A trial trail had been developed and local volunteers from the community, including school-children, will test it this autumn. Negotiations with Plymouth Council to include this with their trails are ongoing. In the spring of 2021, when we have had time to undertake further research at The Box, we will present the full list publicly via the webpage and Face-book page, and invite community engagement for an expanded version of the trail.
Read more about 100 years of powerful women.
100 years of powerful women exhibition.