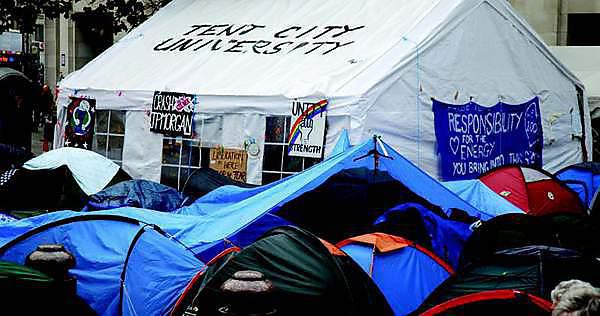 The significance and survival of Tent City University project is of interest to anyone thinking about what a university is and what role it plays in society. It also reveals how protest and activism are not just transitory moments but create new learning opportunities that can live on into the future lives of those involved.

Tent City University was set up by the Occupy protest movement at its camp at St Paul’s Cathedral, London. Well-known academics came and gave talks and, more importantly, members of the Occupy community also developed informal seminars and workshops.

“Academics wanted to come down to speak but we wanted to create a two way feed…If someone just stands on the steps of St Paul’s and addresses the crowd you’re just allowing a traditional mode of delivery and address. You want to map out how to do things differently in your free radical space and even if it’s for a short time, in that context at the time, it would do things; you would see things very differently. Things would occur to you, would occur between you and others in a way that you wouldn’t have experienced before. Tent City University was very much about recognising a way to take what would be a traditional address, education, ‘here’s my knowledge I’m imparting to you,’ and actually create something new.”

This research project uses a life history method of multiple interviews to explore with participants from Tent City University what their experiences were like, how it differed from other forms of education across their life and how Tent City University continues to live on in their lives in multiple ways. It interviews them several times using photographs and artefacts to evoke memories and reflections. It will create a map of the traces created by Tent City University across different spaces, countries and media.
The project is timely because there is much debate about the future role of universities, what different forms they might take, how they engage productively with communities and how to protect intellectual freedom and equal access to knowledge.
Thanks to pump priming from the IHC, Professor Jocey Quinn was awarded a grant from the British Academy to develop this project.
For further information please contact: jocey.quinn@plymouth.ac.uk