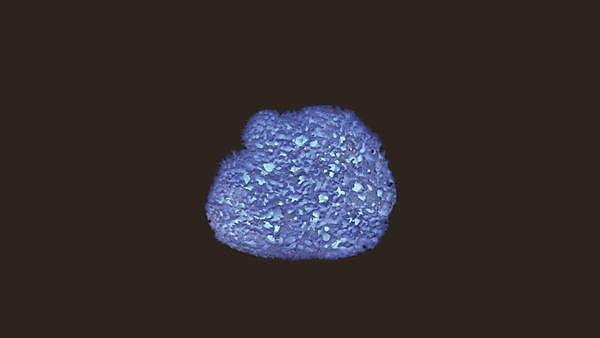 How does a sponge soak up water? What makes for good quality printing paper? How fast are the UK’s 14 advanced gas-cooled nuclear reactors ageing?

The questions might appear to be chosen at random, but they’re as interconnected as the catacombs of pores and tunnels that lie at the heart of each answer. And for one specialist team in the School of Geography, Earth and Environmental Sciences, they represent just a fraction of the insight their research has generated over the course of more than 20 years.

The Environmental and Fluid Modelling Group (EFMG) is changing the way science visualises porous materials, pioneering a new and more complex model of their structural design and the way liquids and gases move within them. And in their market-leading PoreXpert product, they’ve distilled this expertise to create one of the University’s brightest commercial prospects.

“Porous materials are vital to improving and sustaining our standard of living,” said Peter Matthews, Professor of Physical Chemistry and head of the EFMG. “They include the underground reservoir rock from which we extract oil and gas; catalysts; paper coatings; filters; tablets; woven and fibrous materials; and soil – and it is often of great importance to know the structures of these materials and how fluids behave and move inside them.

“However, measuring pore structure is surprisingly difficult. If you look at the porous material then only the outer surface is visible. If the sample is cut and the surface observed, the sizes of the holes or ‘pores’ are evident, but it is impossible to judge the degree to which they are inter-connected in three dimensions – and it is that interconnectivity which is crucial to the ease with which fluids, such as oil, move through the network of pores.”

Until recently, the accepted model for understanding porous materials was the ‘capillary bundle’, which assumes that the pores are like a bunch of very narrow drinking straws, all of different sizes but not connected to each other. The model developed by EFMG, however, is one of three-dimensionally interconnected voids, at a range of micro, and macro levels. And it’s this dual porous paradigm that has proven to be so relevant and transferable across a range of industries, channelled through EFMG’s software and consultancy work.

Pore-Cor was the first commercial distillation of EFMG’s expertise, launched in 1996 on floppy disk, and while never seriously marketed, it did achieve some commercial success, such as with British Gas, who bought the technology to help with risk assessment for insulation oil leaks in soil. But as the team, which includes Dr Maurizio Laudone, Dr Chris Gribble and Katie Jones, has continued to win consultancy contracts and grant bids, including a landmark £1.1 million Biomedical and Biological Sciences Research Council grant in 2006 called ‘Understanding Soil Quality and Resilience: Effects of Perturbations and Natural Variations on Nitrous Oxide Emission, Water Retention and Structure’, so that experience has filtered through to the next-generation PoreXpert.

“PoreXpert was launched in 2012 after an intensive two-year process with the University’s intellectual property partners Frontier IP, but really it’s been in gestation for many years,” said Peter, who is Director and CEO of the eponymous spin-out company. “There are probably a dozen PhD and three post-doctoral theses helping to power the software’s analytics – it’s been built upon generations of postgraduate and academic study. And quite simply, there is nothing else like it.”

Thanks to its ability to upscale from individual pore level to much larger networks, PoreXpert has been used to optimise those products that are defined by their ‘porosity’: catalysts, paper coatings, soil, ceramics, pharmaceuticals and filters. Omya AG, for example, has been able to develop dual-porous paper coating, with the large (macro) pores allowing rapid movement of the ink, and the small (micro) pores ensuring fast absorption and drying.

But perhaps its most profound application has been in the UK nuclear power industry, where its ability to predict ageing and formation damage has been central to its analysis of the rate of oxidation of graphite reactors. In particular, the team has been working for EDF to model and measure the mass loss within the reactor cores to establish whether it will be possible to run them beyond their planned lifespan.

“The EFMG has contributed major advances in the knowledge of many porous materials, often ones that our customers do not tell us about!” said Peter. “Much of the work is surrounded by commercial sensitivity.”

With a £900,000 NERC grant running with Rothamsted Research and the Met Office to look at the phenomenon called ‘hydrophobicity’, the condition where soil refuses to absorb water, and significant sales of PoreXpert from industry and academia including a global partnership with leading science equipment manufacturer Thermo Fisher Scientific, the expertise of the EFMG is more in demand than ever.