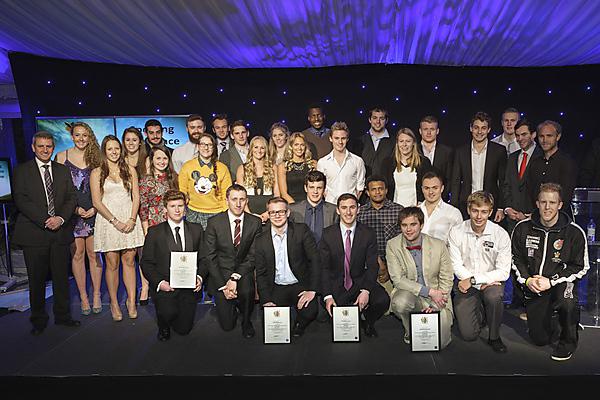 From sailing to swimming and rugby to hockey, University of Plymouth has been celebrating its sporting talent with business and community leaders across the city.

The Sporting Excellence Showcase evening – held for the first time at the city centre campus – recognised the efforts and achievements of sporting scholars and their contributions to the wider community, with each of the 43 students receiving an award.

Olympic divers Tonia Couch and Sarah Barrow, who were awarded Sporting Colours at The University of Plymouth in 2013 and 2014 respectively, were special guests and took to the stage to address the audience, while testimony films provided an insight into how the University supports its students in their chosen sports.

“Our students come from far and wide, yet they choose Plymouth to study and Plymouth to train, and this is a real celebration of how we are connecting our students with our community.”

Among those sportsmen and women honoured were: media arts student Faye West, who is making a name for herself as a wheelchair rugby player, competing in national league games with the Westcountry Hawks; Lithuanian swimmer Mindaugas Sadauskas, who recently competed at the World Championships in Doha; and Joshua Wilcher, who studies criminology and psychology, and who travelled all the way from Australia to play for the University of Plymouth Raiders basketball team.

Other sporting hopefuls coming through the ranks at the University of Plymouth include Daniele Zorzato, fencer; Isaac Jones, motorsports; Luke Holloway, who is in the national squad for PUMA Taekwondo; and Simon McNeilly, who has just been selected for the Team GB archery squad.

Celebrating the students’ successes included tutors, coaches and other key sporting partners, personalities and members of the business community, from Sport England, the Mount Batton Centre, the Life Centre, Plymouth Albion and Crowdfunder.

“Plymouth has excellent facilities and is constantly working to improve upon them. These students are our sporting heroes of the future and testament to the city that they want to come here as well as demonstrating the level of support the University is able and willing to offer.”

Find out how Plymouth Albion and Canadian International rugby player, Brett is aiming high with his Sporting Excellence Scholarship - and why he chose the University of Plymouth to study for his BA (Hons) in History.