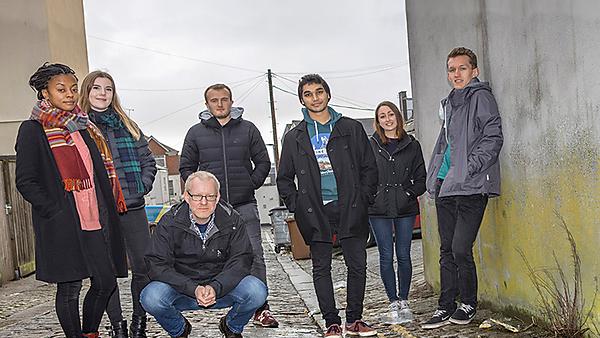 This weekend is the Great British Spring Clean. The event is organised by Keep Britain Tidy, and countless schools, community groups, local authorities and universities are getting involved. Indeed, students from the Geography and Environmental Science Societies at the University of Plymouth have arranged a litter pick on Sunday (meeting at 11am at Plymouth railway station – come along and lend a hand!) to clean up the city, or at least make a start at it.

Looking through the various sponsors of the Great British Spring Clean is quite an interesting exercise. We might expect organisations concerned with keeping nice places looking clean – the Campaign to Protect Rural England, Keep Wales Tidy, My Park Scotland, Country Walking, Fields in Trust – but others perhaps raise more of an eyebrow. Why, for example, are the RSPCA and the RSPB involved? What about the Marine Conservation Society? Lidl, Costa, McDonald’s, Greggs and Coca-Cola? The answer is because all of them have rather more to do with litter than they might like.

Litter is entirely caused by people, and we feel a large number of its impacts. There is the obvious point that it makes places look dirty, and this detracts from any health and wellbeing benefits we might derive from visiting otherwise beautiful towns, cities, coastlines and so on. Litter also gives the impression that people aren’t proud of the places they live in, let alone those they visit or pass through. It hints at a selfishness in people who can’t be troubled to take their food wrapper or drinks bottle home or to the nearest bin.

But litter can also be dangerous. Broken glass, needles and other sharps can cause injury and infection, and batteries and electronic devices (seek and you will find) leach toxic liquids and metals and flame retardants. Dog and cat mess just doesn’t mix with children. Indeed, dogs and cats themselves, along with other animals, can also be harmed by litter and this is why we find animal and environmental organisations sponsoring the Great British Spring Clean.

Quite apart from the obvious dangers of broken glass, needles and the like, plastic is also particularly problematic. The United Nations reckons that up to 12.7 million tons of plastic were washed into the sea in 2010 alone, and so-called microplastics – particles of under 5mm in length that originate from arrange of sources including general rubbish that is ground down by waves, and into which the University is at the forefront of global research – are thought to cause harm to marine life and potentially to people who eat that marine life. More than a quarter of all fish sold in markets in California now contain plastic in their guts.

The International Marine Litter Research Unit has a mission to further our understanding of the impacts of litter on the environment and society, to identify the solutions and the pathways necessary to achieve them.

What can we do to help keep our cities, towns and countryside, beaches and oceans free of litter? Obviously we should stop dropping it. We can also pick it up when we see it, both as part of organised campaigns and as part of a daily routine of being a good citizen. And our own Dr Andrew Turner, who researches the impacts of litter, suggests the simple motto of ‘five a day’.

Local authorities have a role to play, in awareness/educational campaigns and in how they deal with their areas’ waste. In Plymouth, the city council wants to move to bi-weekly bin collection. Perhaps understandably this has caused some controversy, but collecting household rubbish doesn’t automatically suggest an increase in litter if it is accompanied by a significant upfront investment in much bigger and sturdier bins that don’t overflow or blow over. Overflowing and blown over wheelie bins are already a big problem in the city, one that its resident seagull population is only too happy to make worse.

Properly enforced litter policies can be really effective: in Dun Laoghaire, in the Republic of Ireland, the council mounted a concerted effort involving educational campaigns, ‘smart bins’ (they tell the council when they’re full), litter wardens and enforcement in the form of fines for dropping litter. Their efforts have been rewarded by the town becoming the cleanest place in the country.

Rigorously enforcing the fines, which raised EUR33,000 in 2015, has been important, as residents of Switzerland or Singapore, both of which have huge fines for littering, would tell you. Irresponsible dog owners might also think twice if a regime of dog licensing involved DNA coding, enabling the council to find out and fine those responsible for each deposit left on the street.

But the problem is much bigger than people just dropping litter or unsecured bins being blown over. Although they might deny it in public, Lidl, McDonald’s, Costa and Coca-Cola are almost certainly involved in the Great British Spring Clean because they recognise the role their own business practices play in generating litter.

The sheer amount of packaging used in modern life is orders of magnitude more than is actually necessary. A very great deal of the packaging we use is completely pointless (plastic-wrapped broccoli, anyone?) and we’d all be better off without it. We would save resources, spend less money and generate much, much less waste. Fortnightly bin collections wouldn’t be half as controversial if we had less to dispose of in the first place.

Here, national government needs to play a role, and the recent 5p charge for carrier bags is very definitely a step in the right direction. But so too do those global companies who can help by reducing the amount of packaging they use or sponsoring some of the costs of additional bins and litter wardens like those introduced in Dun Laoghaire.

We come from across the UK and beyond and, depressingly, Plymouth is by far the dirtiest city any of us have lived in. But it doesn’t have to be that way.

So let’s help our students clean up our city and region, and then let’s keep it clean and tidy. Devon and Cornwall are beautiful places. When thousands of Americans come in 2020 to celebrate the 400th anniversary of the sailing of the Mayflower, we want them to be sad their ancestors left, not happy they don’t now have to live among a sea of litter.

Supporting our position as one of the leading green universities in the country, students from the Geography and Environmental Science societies have launched a joint initiative to clean up the city’s streets.

Working with academics across both subjects, and the local community, they have signed up to the Great British Spring Clean - organised by Keep Britain Tidy - on Sunday 5 March 2017.

Meeting at Plymouth Railway Station at 11am, volunteer teams of students and members of the public will aim to tidy up residential streets and public spaces near the city centre, making a positive impact on both regular residents and visitors to the city.

The initiative reinforces our students’ national reputation for being both environmentally and socially responsible, but also complements our research and teaching into issues around the impact of litter on urban, rural and marine environments.

Keep Britain Tidy is launching its biggest ever litter campaign to encourage half a million people to get out there and make sure where they live, work and shop is a clean appealing place they can be proud of.

The Spring Clean, which will take place from March 3-5, is being backed by charities such as the RSPCA and the Marine Conservation Society, central Government and organisations including Highways England and businesses including McDonald’s, Greggs, Lidl, Costa, Wrigleys and Coca Cola.