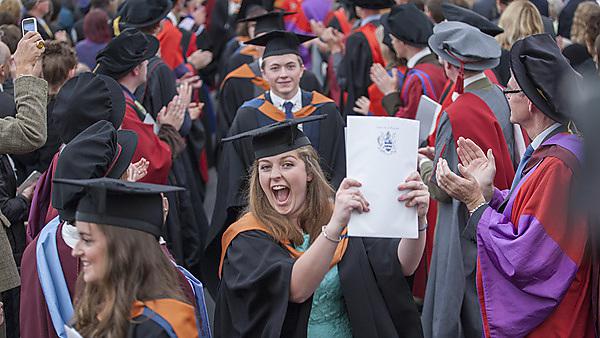 “There surely cannot be a better place to graduate in the country,”

said Becky Robins, gazing towards Plymouth Sound on another typically picturesque September scene. The 21-year-old newly-minted graduate in BSc (Hons) Ocean Science is by no means the first person to utter those words, but with every passing year there is a growing acknowledgement that graduation on the Hoe really is something quite remarkable.

That was endorsed by Matthew Barzun, the United States’ Ambassador to the UK, who attended one of the School of Marine Science and Engineering ceremonies on the Wednesday as part of his official visit to Plymouth, and took to the stage to share a story of President Barack Obama and the value of taking a moment to pause to consider your next move.

He said: “It was a joy and honour to be a part of this special day for so many Plymouth graduates. And it’s a special place to be in general, especially as an American, and as the Ambassador. To be here at Plymouth Hoe, where the Mayflower set sail from, is particularly powerful.”

For the University’s Chancellor, The Lord Jonathan Kestenbaum, Graduation 2015 was an opportunity to formally officiate at one of the ceremonies for the very first time. Lord Kestenbaum presented degrees to Faculty of Business students on the Monday, and was present to observe a minor meteorological miracle, as the hammering rain suddenly ceased barely five minutes before the first ceremony ended and the graduates were due to line up for their official photo.

Lord Kestenbaum said: “It was a fantastic day. When I woke up on Monday morning it was pouring with rain and by the time the students arrived for their photo the sun came out. More importantly, it was a day when we saw the University at its very best: ambitious, and with a tremendous cross-section of students bursting with pride.”

The most important thing that I learned came from the students when we lined up for the photo. They were all talking about what they were going on to do next. Not one of them was talking about ‘the end’; they all gave the sense that it was the beginning. 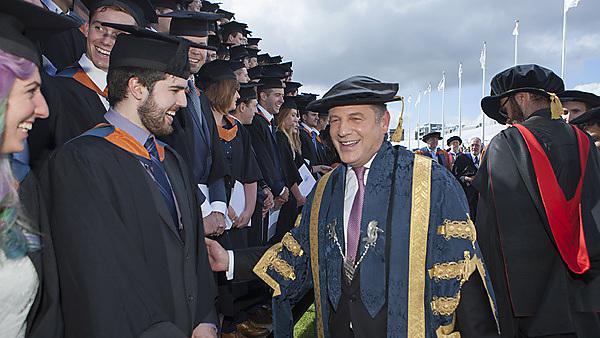 The graduation furniture created by the country’s leading designer, John Makepeace, was also on show for the first time, and he was in attendance to view them in situ, along with Plymouth graduate Ben Harvey, who helped him to make them. And Fijian rugby star Josh Matavesi attracted a large crowd of well-wishers as he attended to celebrate his wife’s graduation. He later tweeted: “Happy and proud you graduated whilst pregnant & raising a 2year old whilst I’m away with Fiji for the World Cup #PlymGrad #proudfamz”.

It was a first Plymouth graduation for David Alder, Chief Marketing Officer at the University.

“I have seen many graduation ceremonies in the 10-plus years that I have been in Higher Education,” he said. “And everyone told me when I came to Plymouth that I would be bowled over by our graduations, but nothing could have prepared me for the reality. I can think of few things that capture the essence of our University so well: a truly moving and uplifting experience that is both celebratory, yet has gravitas; has a big sense of occasion, yet is slightly unorthodox; and, perhaps most importantly, is hugely exhilarating and fun.”

The last word, as the first, goes to Becky, who graduated on the same day as her sister Nicola (MEng in Civil and Coastal Engineering). Her path to Plymouth was paved by her big sister, who first advised her that a love of the coast could be channelled into a relevant degree at university.

“It was the only course I wanted to do, at the only university I wanted to attend,” said Becky. “So it’s fitting that at the end of it all, we’re here by the sea again, and I can celebrate with my friends and family, knowing my degree has helped me to secure a graduate job with a major water company.”