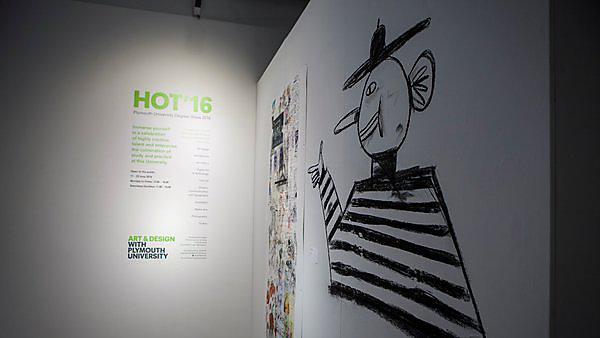 Final year projects spanning the breadth and imagination of the arts have been on display across the University in HOT ’16. The arts degree show featured some 500 pieces of work across 3D Design, Fine Art, Illustration, Media and TV Arts, Photography, Digital Media and Animation, Architecture, Graphic Communication with Typography, and Digital Art and Design.

There were sculptures, paintings, photographic collections, illustrations and digital innovations, many with interactive elements designed to capture visitors’ imaginations, all on display in the Roland Levinsky Building and Scott Building on the University campus, and the Mills Bakery at Royal William Yard. 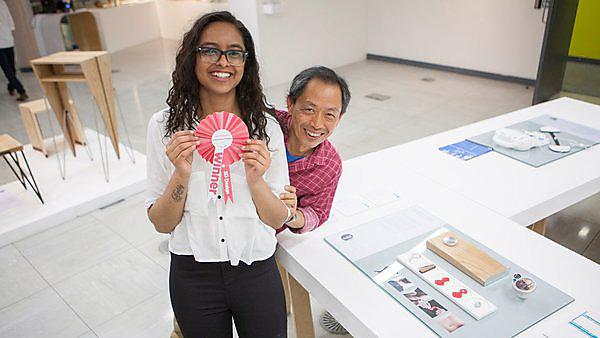 For many, it was a first opportunity to engage with a critical audience, and in some cases openly put their works on sale. Guneet Sidhu (pictured), BA (Hons) 3D Design, for example, demonstrated her project, the Augmented Internet, which included designs for different wearable technologies, for which she was awarded the Product Designer Prize.

She said: “I’ve had some great opportunities at Plymouth, such as being able to go to India in January to practise human-centred design, which is my main goal for the future: to expand on that and to work with people.”

Steph Howard, Graphic Communication with Typography, showcased her project, ‘It Feels Like’, a series of publications covering the topic of mental health at university.

She said: “The idea is about metaphors: the use of metaphors helps you to understand and overcome different types of mental illness.”

“Specialising in typography really makes the degree here stand out from other design courses,” he said.

The Sea and Me

Students in marine science and photography joined together on an interdisciplinary project to creatively capture the relationship between man and the sea.

‘The Sea and Me’ saw 20 students work collaboratively to create pictures that explored issues of sustainability and the natural world. They were then put on display to the public for an evening at the Plymouth Arts Centre.

Dr Heidi Morstang, Lecturer in Photography, and Dr Simon Ingram, Lecturer in Marine Conservation, led the project, which involved a number of field trips around Plymouth to serve as inspiration for the students.

Eliza Naish, BA (Hons) Photography, said: “Taking part in ‘The Sea and Me’ project was an exciting way of merging scientific data and art, something that very rarely happens between the two subject areas. It enabled us to work alongside a faculty that we, as photographers, would not have necessarily crossed during our education, and to engage with data, statistics and other factual insights that the marine students were used to working with.”

Professor Martin Attrill, Director of the Marine Institute, chose a winning entry on the night and awarded a prize to students Emilie Johnsen and Liz Evans for their picture.

Martin said: “It was a real pleasure to be able to judge the work produced by the students, and it exemplifies the interdisciplinary nature of what we do here within the marine area and the broad portfolio of expertise that the Marine Institute represents. This was not only a valuable and enjoyable exercise for the students, working with someone who may have a very different way of viewing the world, but they also produced some remarkable pieces. It was certainly a very tough decision to award the prizes, and all the pairs need to be congratulated on what they produced.” 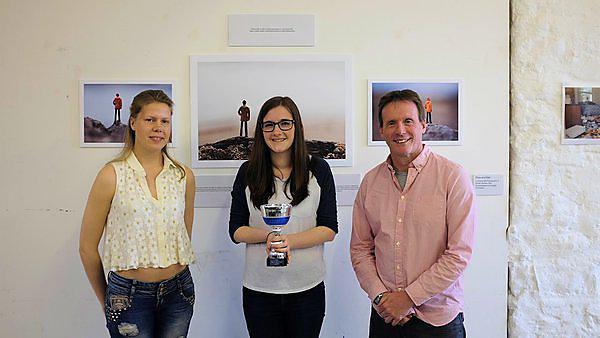 Prominent national figures from the fields of scientific research, communication and policy attended a major conference in June organised by one of the University’s new research institutes. 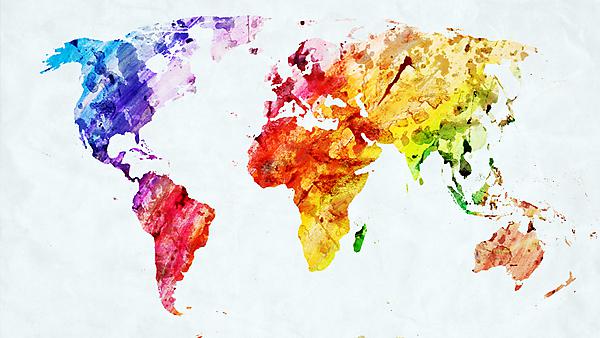 Sustainable Earth 2016 featured two days of keynote speeches, from the likes of Sir Mark Walport, Chief Scientific Adviser to the government, and Craig Bennett, CEO of Friends of the Earth, as well as networking sessions and workshops. There were also research presentations and seminars led by academics at the University, and representatives of organisations including the University of Iceland, the Environment Agency, Westcountry Rivers Trust, and the Salvation Army.

It provided a first public platform for the Sustainable Earth Institute (SEI), which is working to increase awareness and knowledge about a range of issues affecting society and the environment across the UK.

Iain Stewart, Professor of Geoscience Communication and Director of the SEI, said: “There is some great research being conducted in Plymouth on sustainability issues, not just in the city and the region, but globally, and this was our chance to showcase that. Many of the concerns that we focused upon are pressing and complex, but it’s not all doom and gloom – there are some great uplifting stories to be told.”

A first-ever colour dash on campus by students at the University raised more than £4,000 for charity Brain Tumour Research, in June. Almost 300 students took part in the event, which saw them donning bright white gym kit and running around an obstacle course on the University campus, while being pelted with brightly coloured powder paint.

Led by Student RAG (Raise and Give), the dash was one of a number of events to support BTR, and which raised a combined total of £7,000 for its research work. 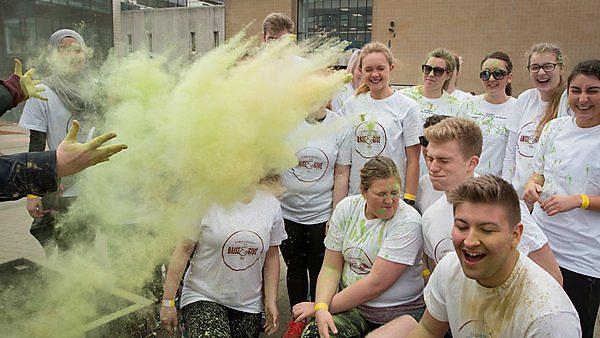 UPSU takes to the road

The University of Plymouth Students’ Union has put the wheels in motion to improve the level of support that they can offer partner colleges across the South West and into London. After budgeting for four years, UPSU has invested in a new ‘mobile Students’ Union’ – a 2015 Volkswagen Transporter T5. 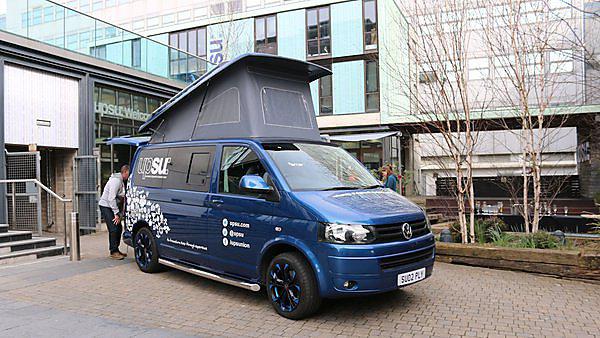 The eye-catching VW has power sockets, a table and chairs, a canopy extending the space outside, and a roof which lifts up to form a bed space, hinting at the surfing community associated with the South West. But its real use will be to enable sabbatical officers to drive to colleges and set up shop to promote the societies and services under the UPSU umbrella.

Davide Bertelli, UPSU Vice President, International and Outreach, said: “With the mobile SU, we’ll finally be able to take the Students’ Union out to our partner institutions. We understand that there is an identity issue and many students off campus find it hard to relate to UPSU. This is a problem we can finally address now: by consistently reminding our off-campus students what UPSU is and what we can do for them, we hope to see more engagement and interaction.”

A successful pilot project using a hired van convinced the union to invest their commercial profits into the mobile SU, and a plan is being drawn up as to where and when it will go.

Gina Connelly, UPSU Chief Executive, added: “We are all delighted here at UPSU to finally have our new mobile SU! It’s the realisation of a long-held vision to raise our profile and engage further with our students who are located off-campus.”

This is Where We Are

Tens of thousands of visitors to the Tate Modern Switch House in London had a glimpse of the future thanks to the University’s digital arts research laboratory, i-DAT. The team was commissioned to produce an immersive and interactive sculpture for the new building – entitled ‘This is Where We Are’ – which uses climate and physical data, and social media interactions, all recorded around it, to change the nature of the display on its many panels.

i-DAT worked with the Tate Collective, in partnership with Affinity with Plymouth University, InterCity, GaiaNova, Immersive and TR2 to create the 5m by 3.5m sculpture. 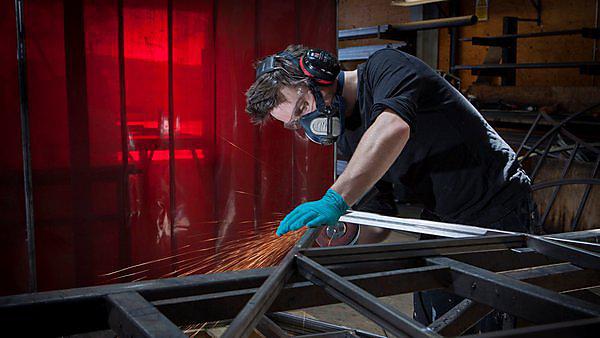