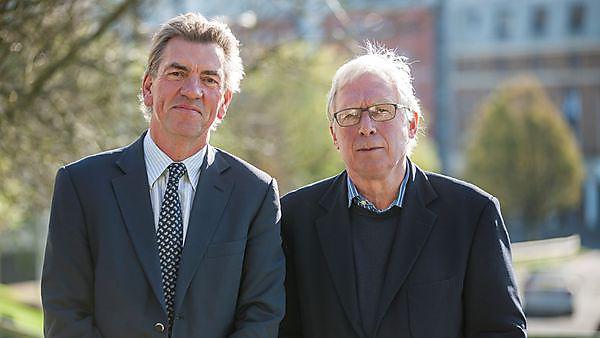 It is not every career that prompts a national newspaper to run an editorial in which it praises your work as doing ‘more than most to illuminate British democracy’. But they were the words used by The Guardian when it came to reflect upon the body of work amassed by Colin Rallings and Michael Thrasher, both Professors of Politics at Plymouth.

For 30 years, Colin and Michael have built and maintained a database of local election, and latterly General Election, results, which has redefined the very science (and art) of political analysis. In the process, their insight has led to policy reform and revolutionised the way the media across five continents covers elections.

Theirs is a story that dates back to 1976–77 when the pair first joined the institution as lecturers; a time when simply no one systematically collected local elections data, and media analysis was the equivalent of ‘sticking your finger in the air to see which way the political wind was blowing’.

“We were looking to do something innovative and different,” says Colin. “No one had ever attempted to collect results before – it was deemed too daunting. But that is what we did from 1985, and by building the database, we opened two distinctive opportunities.”

“The first was on the academic side,” adds Michael. “You could now produce evidence-based research on local elections and make informed evaluations. The second was in relation to the media, who now had actual data which they could use to benchmark voting trends.”

It was a ‘Eureka moment’ for the pair and The Elections Centre that they founded – one that established local elections analysis as a legitimate academic sub-field. With research council grants, they meticulously began to back-fill the database, collecting information by post, email and telephone from local authorities, as well as recording all subsequent elections.

The British Local Elections Database now contains more than 300,000 results dating back to 1899, and information on almost one million candidates. Names, party labels, votes cast, electorate and turnout are freely available to analysts of all disciplines across the world and can be viewed at a candidate, ward and local authority level. And as if that wasn’t enough, Colin and Michael have been conveniently pulling all of this information together in the annual Local Elections Handbook since 1985.

From 1992, the focus broadened to include General Elections, and it was their successful prediction of national vote shares prior to the 1997 result that sealed their status as the ‘go-to analysts’ for the international media. Their near-forensic insight into the consequences of parliamentary boundary changes at the 1997 and 2010 elections for a consortium of media outlets including the BBC and the Press Association only reinforced that reputation.

“The model we developed in the mid- 90s was able to track the current state of the parties through real data and results, rather than asking people for their voting intentions as the pollsters would do,” says Colin.

Already columnists with The Sunday Times, Colin and Michael have become fixtures with ITN and Sky News, notably on their live electionnight broadcasts.

“For two academics from the same institution to have been providing analysis for two competing national media stations for more than 20 years is unique,” says Michael. “It gets the adrenalin pumping to be part of events as they unfold.”

Recognised in 2007 with the esteemed Political Studies Association of the UK’s Communication award, it is their standing in the Westminster ‘village’ that is perhaps most revealing – even to the extent that they received weekly calls from the late Lord Gould, Tony Blair’s strategy advisor, in the run up to the 1997 election.

“The phrase ‘It’s what Plymouth says’ is the one we hear the most,” says Michael. “That shows the esteem that the University is held in.”

For the past 18 months, Michael and Colin have been working on an Economic and Social Research Council-funded project to further update the British Local Elections Database, and place the information in the public domain via the internet. And then there’s the small matter of the General Election, which promises to be a desperately close race between Labour and the Conservatives, and with plenty of sub-plots.

“The rise of UKIP in England and the SNP in Scotland makes this the most unpredictable election for over 40 years,” says Colin. “Who wins individual seats and how the picture stacks up nationally will reflect considerable variations in behaviour across the country – the days of uniform swing look well and truly over.”

“We’ll be spending Election Day watching responses come in on the joint BBC/ITV/Sky exit poll and helping the analysis team make sense of it all,” adds Michael. “It’s a nervous time once the count begins and we have to wait several more hours to see whether, as in 2005 and 2010, we’re on the button.”

Once more unto the breach: it’s clear that Professors Rallings and Thrasher have not finished illuminating British democracy just yet.