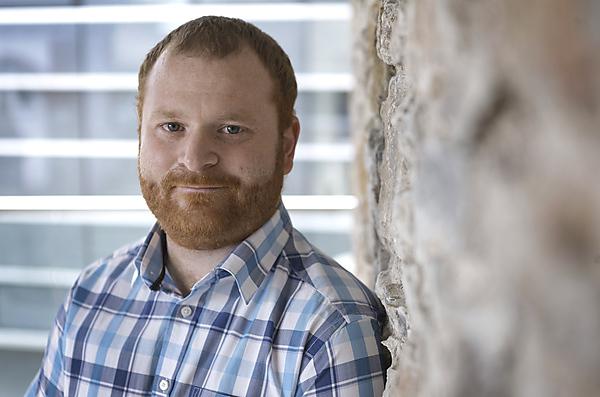 Leigh, a Research Fellow in Applied Health Genetics, in the School of Nursing and Midwifery, has just returned to university duties (in mid-February) after completing a mandatory period of time away from campus. Sitting in the Reservoir Café, it’s a far cry from the camp in Makeni, where he spent December and January analysing blood samples to help contain and combat the spread of the disease.

“I had been following the Ebola story on the news with a feeling of growing frustration and sadness,” Leigh says. “It’s a nasty disease, but one which can be stopped relatively easily with just soap and water. But it takes the right people and processes to contain it.”

In November, Leigh contacted Public Health England after hearing that they had established fi eld labs in Sierra Leone, and enquired as to whether they might find a use for his skills. Having completed his PhD in stem cell research, he was no stranger to working in labs using polymerase chain reaction equipment (a technique used to study DNA in molecular biology).

With permission from his supervisor Professor Heather Skirton, and the blessing of Head of School Dr Ann Humphreys, Leigh underwent a medical, a psychological questionnaire and an interview with a counsellor, before being invited to a week’s training session on December 15 at Salisbury Plain. Within days he was on the plane to Africa.

“I didn’t even have the chance to come home to Plymouth,” Leigh said. “It was quite a shock, probably more so for my family with whom I’d had the delicate conversation some weeks previously. They were worried, of course, but then my dad had volunteered on the Plymouth lifeboat for 17 years, so he didn’t have a leg to stand on!”

Leigh joined a team of 14 Public Health England volunteers, who came from universities, pharmaceutical companies and hospitals from around the country. Based in the only brick building on the camp, up to ten volunteers at any one time would work on blood samples and swabs brought in from the community or taken from patients who had been invited to attend the centre.

Working in an isolator, through no less than three pairs of gloves, Leigh and the team would process up to 60 samples per day, using a centrifuge to spin the blood, a process that would enable them to extract the plasma and neutralise any risk of transmitting the disease. Once that was done, they could then work without protective gear while they tested the plasma for signs of Ebola and malaria.

If the sample was found to be positive for Ebola, the patient would be admitted to the centre for treatment, or if it had come from the community, then containment, clean-up and burial teams would be dispatched to the location. Anti-malaria drugs would also be issued if anyone was found to be suffering from the disease.

“Most of the swabs had come from dead children, and that is the grim reality in an area where infant mortality is so high,” said Leigh.

Unlike at many of the other charity sponsored camps, the volunteers at the International Medical Corps camp (the charity behind the Public Health England operation) were allowed to go out into the community. Leigh’s hotel was in the centre of Makeni, and he had the chance to visit the local markets and speak with the people.

“We had many locals come up to us in the street and thank us for our help, and that was inspiring. But it was also important for the people. When the outbreak started, many were in denial about the disease. Then, when the clean-up and burial teams started to arrive, clad in their all-over protective suits, it was a very intimidating thing for them to deal with, not to mention a challenge to their social traditions around burial. So to be out there in the community, presenting a human face so to speak, was great.”

By the time Leigh departed for England, the camp’s turnaround time for obtaining results was down to as little as two hours. And it had also released its 19th patient back into the community – meaning more people had been successfully treated than had died in the centre.

“It’s the singing and dancing of the patients when they leave the facility that stays with you,” Leigh says. “And with every handprint and name on the ‘survivors’ wall’, we’ve helped to address not just the medical, but also the cultural and social challenge of combatting Ebola in Sierra Leone.”