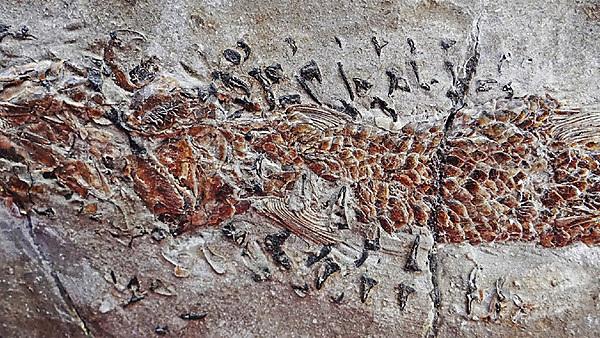 The fossil was discovered in 1879 by an unknown collector and placed in the Geological Museum collections in London. It later returned to the area it was discovered, and was brought to Lyme Regis museum, where Professor Malcolm Hart travelled to study it.

There was a note accompanying it identifying the squid-like creature, but the fish which it was attached to had not been identified. Professor Hart had been working on the ‘ear-bones’ and ‘arm hooks’ of fossil ‘squid,’ so could easily identify this, but invited Professor Gloria Arratia from the University of Kansas to help with identifying the fish; which was discovered to be a herring-like fish.

“it is clear that neither animal was eaten on the way to the sea floor and that is probably unusual (which explains why such fossils are so rare).”

How did the fossil come to be?

One hypotheses believes the fish was attacked by the squid, but being so large the squid had trouble killing it. The squid then pulled the fish deeper under water, to where there is less oxygen, in hopes to kill the fish, but went so deep it also killed itself. They then sank to the bottom of the ocean, deeper than other sea creatures ventured which is why they were not eaten. Millions of years worth of sediment settled on top of the fish and squid preserving the attack to this day.

We thought we would conduct our own research into the world of fossils and try to demystify some of the science behind them and find out why fossils are so important today. We asked Dr Jodie Fisher to help us.

What is the process for identifying fossils?

Identifying fossils can be incredibly hard, depending on how well preserved it is, and how complete it is! Some fossils including some dinosaurs are even identified and named based on just one bone or even just one tooth.

Normally just the hard parts of fossils are preserved, meaning it can be hard to imagine what the fossil was when it was alive and what it looked like. Skin, hair, feathers and other soft materials are rarely preserved, so when exceptionally preserved fossils are found it is really special.

How can you tell what animal it came from?

Once you find a fossil it can often be quite easy to tell quite generally what it is. Commonly found fossils in the UK are ammonites, bivalves, belemnites and coral which many people have heard of and can recognise. Finding out exactly what type of ammonite or belemnite they might be is much harder.

There are thought to be more than 10,000 species of ammonite that existed in the geological past, yet an ammonite expert can examine small differences in the shell the creature lived in and identify exactly which species it was, and from that they can determine exciting details about the past, the type of species can tell us how old the rocks are that they were found in, and even what the climate was like that the ammonite lived in millions of years ago

How can you tell when a fossil was alive/died?

Different species lived in different time periods, which is why fossils, and fossil identification is so important for dating rocks.

And just like today different creatures live in different environments, so by identifying what the fossil is and what the rocks are they it is found in we can understand how hot/cold, shallow or deep the environment was. Fossils provide an amazing window to the geological past!

How much information can you discover about an animal by looking at its fossil?

Just like looking at an animal today, we can also determine a huge amount by looking at fossilised animals too.

We can also determine a huge amount about how they lived, whether they are a sea creature, a dinosaur, or a plant we can use information we have about modern day animals and plants to help us understand what the fossil might have been and how it lived.

The tooth of a dinosaur might help tell us what it would have eaten, whilst the shell of a sea creature might tell us how deep the water was that it lived in, if you are lucky and find a whole fossilised skeleton you may even be able to see what the animals last meal was! And there are some fantastic examples of fossilised stomach contents being discovered telling us all sorts about the creatures’ habits and diet. 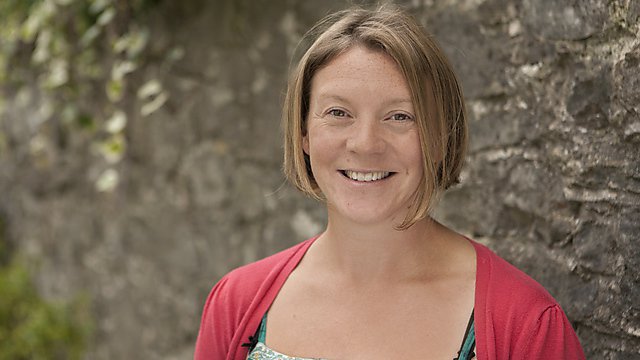 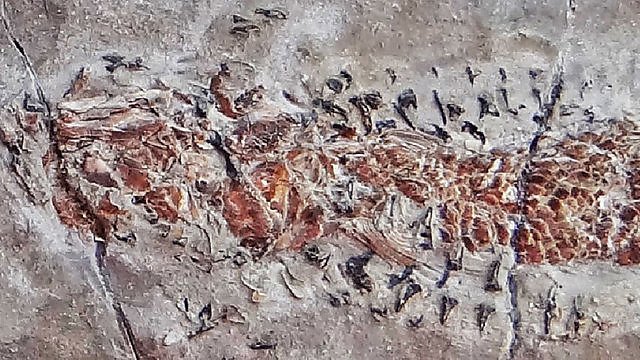 The fossil from Dorset 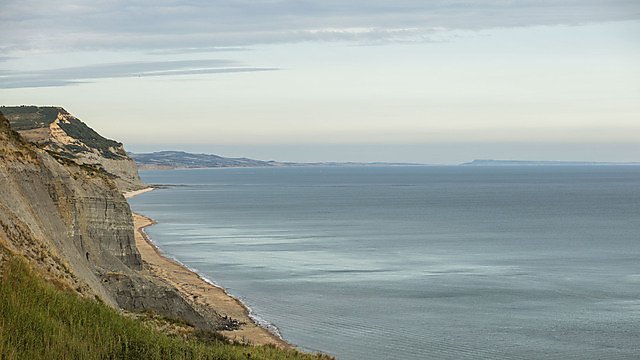 After your years of experience, are you now able to look at a fossil and identify what it is quite quickly and pick out its quirks, or does it always take some time?

I study very tiny fossils that you can see only see under the microscope and certainly, as you become more experienced, it becomes easier and easier to know exactly which species it is very quickly, and its long Latin name (Spiroplectinella gandolfi is one of my favourites).

However, many palaeontologists specialise in one type of fossils, or one specific time period, so I often need help identifying the bigger specimens. I am still amazed when different experts can pin-point exactly what the species are, when to me they all look the same.

What’s the most interesting fossil you have investigated?

As I said I specialise in microfossils. These can be anything from microscopic bits of a larger animal or plant (such as teeth or pollen) or whole organisms in themselves. I study foraminifera, single celled organisms that grow beautiful tests (known as shells) in a range of forms, making them easy to identify from a range or environments and time periods.

As they make their tests within the ocean, as they grow they record the chemistry of the ocean too! Just one of these tiny fossils (smaller than the eye of a needle) can tell us exactly what the ocean it grew in was like, even if it lived over 100 million years ago!

From ocean temperature, to ocean circulation, to how much volcanism there was at the time it was living, these little organisms can tell us all about the history of the oceans.

My favourite foraminifera, however, don’t grow their own test, instead they make them from the sediments in which they live, and some of them are super fussy! Only using specific grains such as sponge spicules, small fragments of the mineral mica, or even specific species of other microorganisms.

Palaeontology isn’t all about dinosaurs, sometimes it’s the tiniest fossils that can really unlock the secrets of the past!

What’s the most interesting fossil story you know of?

One of the most amazing fossils I have seen was on a fieldtrip to Germany where we visited the fantastic Posidonia Shale. Famous for its exceptional preservation of Jurassic fossils, it is definitely worth a visit, however one of the fossils was very unique.

Preserved in amazing detail was a Stenopterygius giving birth to live young! This genus is a type of Icthyosaur (a marine reptile) that looks remarkably similar to a modern day dolphin, and like modern day marine mammals this reptile was giving birth to its young tail first.

Fossils like this preserve a tiny snapshot of time, yet give a huge insight to the life and nature of these creatures that we do not normally see. 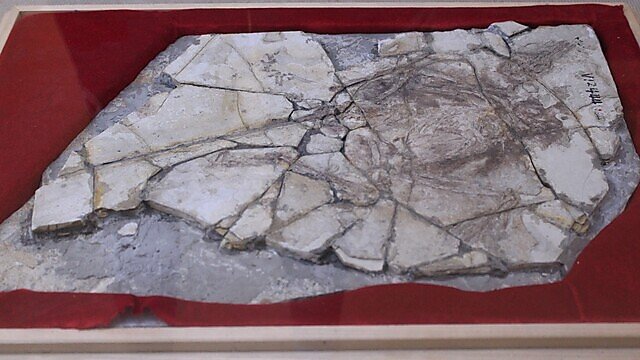 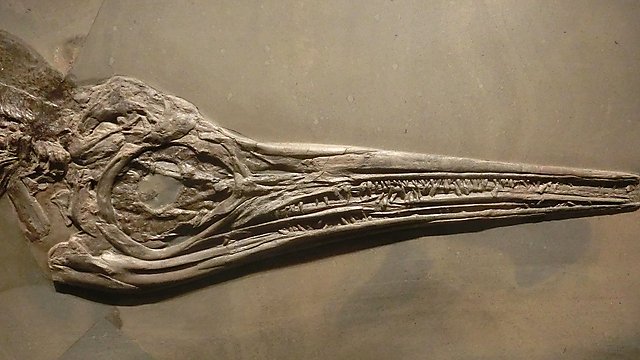 Are there any famous fossil discoveries that have later on been proven to be something else entirely?

Quite a few! And certainly many in the early days of dinosaur hunting, when no one really knew (and many we still don’t) exactly what the dinosaurs they found would have looked like.

One of the most famous is probably the thumb spike of the Iguanodon, a large bipedal (2 legged) herbivore dinosaur that roamed northern Europe, including the UK, around 120 million years ago.

The original finds in 1822 and 1834 (in the south of England), placed a spike on the nose of the Iguanodon, and determined that they were heavy, thick set creatures. Subsequent discoveries of more complete specimens in 1878 turned this interpretation on its head however, with the ‘spike’ actually being found on the hand, as a modified thumb, potentially to break into seeds and fruits, as well as to defend itself.

What about fossil hoaxes?

Fossil hoaxes have made big news, with the most recent being that of the Archaeoraptor in 1999, an amazing fossil proving the missing link between birds and carnivorous dinosaurs.

Only it was not to be, bones of a primitive bird, a dromaeosaur (small feathered non-flying carnivorous dinosaur) and the feet and legs of another unknown animal had been combined together in a high-profile hoax! Following publication in the National Geographic in 1999 questions were asked, and eventually following a scientific investigation the fraud was unearthed.

Do you think it is important to help paint a picture of the fossilised animal’s lives for the public?

By understanding what animals looked like and how they lived not only brings life to old bones, it also gives us an insight into how creatures evolved, why they evolved, and how they have been shaped and changed by global changes in climate, or by geological disaster.

With our Earth undergoing huge changes in climate in the modern day, we can learn a lot from fossil life, and by understanding how life has adapted and survived through geological time we can gain an understanding as to how some creatures survive, and some do not.

Not only that but fossils are pretty cool, and it is amazing to find out the stories that are hidden in the fossils that all of us can find!

Find out more about the fossil discovered in Dorset.