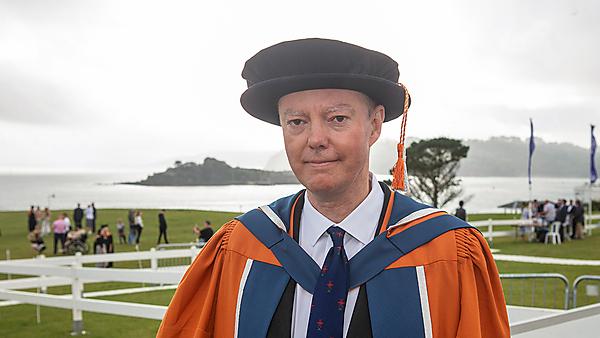 Plymouth Hoe is a superb place to have a graduation. There are very few places, in England at least, where you will find somewhere as beautiful as that to graduate.

Under autumn skies, with the University’s Graduation Week restored to a physical ceremony once again, Sir Chris had received an Honorary Doctorate of Medicine from the University in recognition of his support for its research community.
The following day, he would deliver a guest lecture on campus to a packed audience on the health challenges facing coastal communities.

“It was an honour to receive a degree with University of Plymouth students graduating in medicine and health sciences, many of whom have been working to combat COVID-19 as well as completing their studies,” he says, speaking from his office in London, some weeks later. “This generation of students have had a particularly hard last two years and have responded remarkably.”

Few people have had a better insight into those two years and the pandemic that has dominated them than Sir Chris, who, as Medical Adviser to the UK government and head of the public health profession, has played a critical role in supporting the scientific and clinical response to COVID-19. During that time, he’s been catapulted into the public consciousness like no other Chief Medical Officer in living memory, a constant presence on our television screens and in our newspapers, and now, a Knight of the Realm for good measure. As The Times put it, a “quiet professor (who) became the most influential figure in the land.”
But there’s more to Professor Sir Chris Whitty than the fight against COVID. For decades, he’s been at the forefront of medical research into tropical diseases and played a key role in overseas projects tackling malaria, HIV and Ebola.
He was part of the governmental advisory group that dealt with the Novichok poisonings on domestic soil; and there’s his continued commitment to patient care, running clinics throughout the pandemic, even treating those in need on Christmas Day 2020. “I am a clinical doctor, who happens to be doing this job as Chief Medical Officer,” he says. “I am a clinician and I’ve always found it incredibly rewarding.”
Born in Gloucester, the eldest of four sons, Sir Chris spent his formative years overseas, living with his family in countries such as Nigeria and Malawi, before he returned to England to complete his education in West Sussex, and Malvern College, Worcestershire. He describes it as “something of an accident” that he ended up in medicine. Accident or otherwise, Sir Chris earned a place at Pembroke College, Oxford, where he studied for a degree in physiology, and later, a doctorate in medical science.

“Like a lot of people at university, I saw it as a great opportunity to be intellectually adventurous and look at other things,” he says. “So, I was interested in history; I was interested in politics and philosophy. I believe that university is a time to expand in lots of areas and not just the one you’re doing your degree in.”

This broader interest in other topics is evident from some of the educational opportunities Sir Chris has sought out alongside his medical career, such as an Open University diploma in Economics; a degree in medical law from Northumbria University; and an MBA from Heriot-Watt University. But medicine has remained the driving force of his career, having studied medicine at Wolfson College, Oxford.

“I preferred the areas of medicine where you made a treatment and people got better relatively quickly. I think that is one of the attractions of infectious disease medicine.”

So it was that Sir Chris began training in this field of care at the London School of Hygiene & Tropical Medicine (LSHTM). And his career as an epidemiologist has taken him back to Africa, and to Asia, working as a doctor and conducting research. He was Director of the Malaria Centre and Professor of Public and International Health at LSHTM, where during his tenure, the centre landed a £31 million grant for malaria research in Africa from the Bill & Melinda Gates Foundation. He would go on to be the principal investigator on that programme. 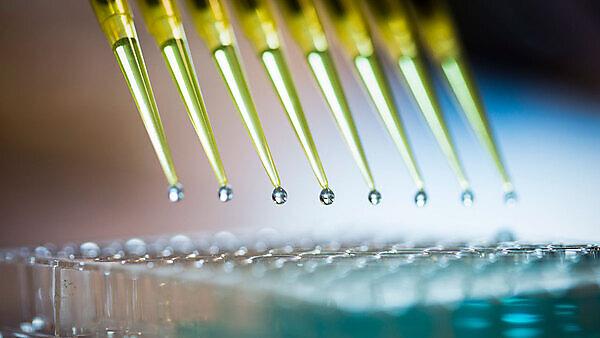 In 2009, Sir Chris was appointed Chief Scientific Adviser and Director of Research for the Department for International Development. Here he headed up the Research and Evidence Division, which worked on health, agriculture, climate change, energy, infrastructure, and economic and governance research. This included leading technical work on the West Africa Ebola outbreak and other international emergencies, and it was during this time that Sir Chris and two co-authors first formulated the proposal to build and support centres where people could self-isolate voluntarily if they suspected that they had the disease.

“I lived overseas for quite a lot of my childhood and it seemed quite natural to undertake research – so that led me into the field of researching tropical diseases in other countries,” he says. “And I think I was very fortunate to work overseas because you learn a huge amount from colleagues working in different systems. It was a great opportunity for me to learn and to contribute through teaching and research. Indeed, I would encourage anyone with the opportunity to work overseas to do so because it does bring big benefits in the long run.”

As the UK’s representative on the Executive Board of the World Health Organization – a role he has held since being appointed Chief Medical Officer for England in 2019 – Sir Chris retains that international outlook. But he’s also been at the heart of two of the biggest domestic public health stories of modern times. As Interim Chief Scientific Adviser, he chaired the government’s Scientific Advisory Group in Emergencies (SAGE) and advised the government's Civil Contingencies Committee, COBRA, during the shocking Novichok poisonings in Salisbury. And then came COVID-19, which, while international in its scope, has turned Sir Chris into a household name, whether he was ready for it or not.

“In the case of the Salisbury poisonings, I wasn’t really involved with the media side – that fell to the Chief Medical Officer at the time,” he says. “With COVID, well, I’ve had to get used to it. It’s not something I would choose to do but it’s a necessary part of the job. You’ve got to be able to present in public, and as with most professions, medicine requires you to explain technical things to people who come from different disciplines. The same would be true if you’re talking about law or engineering. It’s a professional skill.”

Despite the demands of his governmental role, Sir Chris has remained a practising NHS Consultant Physician at University College London Hospitals and the Hospital for Tropical Diseases. He continues to treat patients with infectious diseases, including those with COVID.
He says: “People are motivated by different elements of their role, but I’ve always found that interacting with patients, learning from them, and learning what to do next is a really important part of my career and something that makes it worthwhile.”
That theme of learning is a recurring theme in our conversation, and when I ask what advice he might have for a Plymouth graduate starting out on their profession, the answer is a passionate one.

“You have to accept that you will continue to learn throughout your career and the point at which you obtain your degree is still a very early part of your learning journey,” he says. “You’ll be learning, hopefully, to the very last day you stop practising. And then if you transition over to be a doctor or a nurse or another discipline, you learn a great deal doing it. It’s a continual and interesting journey.”

For Sir Chris, that journey has taken on a coastal aspect this year, and one in which academics at the University have played an important role. Published in the summer of 2021, his Chief Medical Officer’s Annual Report featured a chapter by Professor of Health Policy Sheena Asthana and Senior Research Fellow Dr Alex Gibson, which highlighted the many and varied health challenges facing England’s coastal communities. Indeed, on the morning before we speak, Sir Chris has been talking to the chief executives of the regional health trusts about how some of the ideas raised can be taken forward.

“The report concluded that there is more in common between coastal areas than there often is between them and their nearest inland neighbours, and that is true all around the coast.” 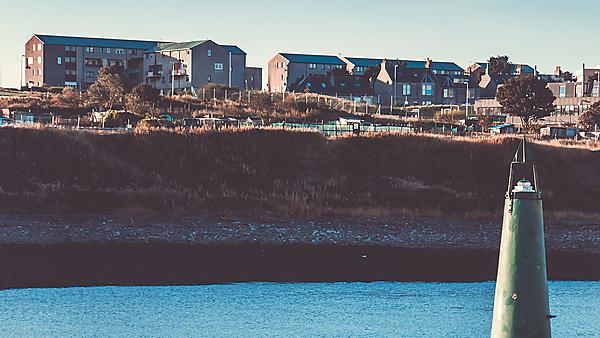 “The University did a huge amount of research on this, both on the 'dry end' of the spectrum – so, looking at coastal communities, where a lot of the research we quoted was from Plymouth – and on the ‘wet end’ with the marine biology and sciences that Plymouth has specialised in. There is nowhere better to think about how communities interact with the sea and the marine environment.”
And Sir Chris believes that this is where the teaching side of the University also plays a crucial role. “There are two big drivers of poor health, broadly: relative depravation and poverty on the one hand, and age on the other.”
He continues,

“Along the coastal strip of the UK, there is both deprivation and older populations, and these are the places we have got to provide strong healthcare to. One of the recommendations of the report was that it’s essential that people are trained in coastal areas because they tend to work close to where they’re trained. And therefore again, Plymouth, having a medical school and a whole variety of paramedical disciplines, is absolutely critical for the South West in the medium and long-term.”

With COVID continuing to cast a shadow over the health landscape, Sir Chris is nevertheless looking to develop wider work in the next year. Firstly, he says, there’ll be a focus upon air pollution as a driver of ill-health. And then there’ll be work around multiple morbidity – how people accumulate chronic conditions as they grow older, and how medicine can move beyond just focusing on a single disease. And for these major questions, he remains an advocate for the role that universities can play in answering them.
“What you have around the UK is an ecosystem of outstanding universities, some of which are outstanding in multiple disciplines and some are more specialised,” he says. “Plymouth is both and has some areas of science where it is the best in the UK or best in Europe. I think that is the level to which we should aspire: really good teaching, which is essential for the community and society, but also really good research because that is what drives the future.”
It’s a message of hope following a long period of uncertainty. Education and research: the health of the country is in our hands.