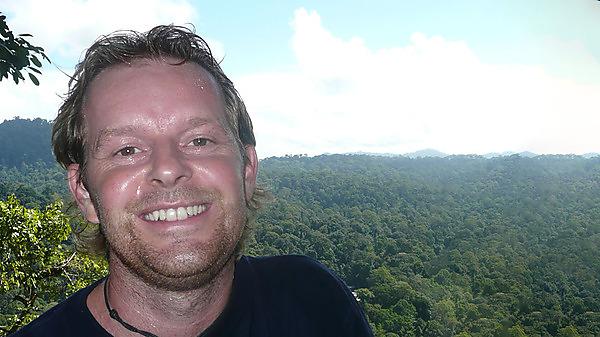 “I am now the CEO of GVI and present at many conferences, working alongside organisations such as the British Council and UN: and it’s all thanks to Plymouth University!”

My aim was always to work in conservation. At first I worked with the Devon Wildlife Trust on campaign ships at a research station in Ireland, conducting cetacean research. This led me to set up my own organisation. I conducted contracts for a huge range of organisations and had an amazing five years working at sea around the world. I then approached an organisation called GVI and offered to help them for free, but ended up enjoying their mission and passion so much that I joined them full-time and closed down my own operations.

I joined GVI as an Expedition Leader, tasked with setting up and running an on-going marine research and conservation programme in the Caribbean. After some initial challenges and teething issues, it went very well and is still running today. We rapidly expanded our work to environmental education, alternative-income education for adults, and eventually community development as well, taking a more holistic approach and tackling the key local issues. Once the programme settled, I took on the role of Programs Director and bounced around the world, setting, running, and overseeing a huge range of projects and building up a huge range of experiences.

Through the years, we have built a reputation for serious impact work, building partnerships with many National Parks around the world, government ministries such as the Ministries of Education and Youth, and world respected NGOs such as Save the Children and the Red Cross. I am now the CEO of GVI and present at many conferences, working alongside organisations such as the British Council and UN: and it’s all thanks to Plymouth University!

In many ways no, but its breadth has expanded. I started off focused on marine science and conservation but rapidly realised that science alone was not the answer. My passion remains the same, but I now see that the answers require a much more holistic approach. So I now work on and am passionate about all global issues, their solutions, and about educating and engaging people in them.

I needed all the experience I had gained to successfully survive my first five weeks running a marine expedition of over 20 staff in the jungles of Mexico. It pushed me to the limit and I think that it was there I discovered that as the leader I did not need to have all the answers but that we, as a team, did. Thankfully, by pulling on the resources and skills of the team, we made it through. A lot of the things I learnt in those five tough weeks we use today in GVI.

Oh my hat, as we say in South Africa, that’s a tough question. I have survived hurricanes and arrest in Mexico, worked with whale sharks in the Seychelles, Mayan communities in Guatemala, worked alongside Nobel Prize winner Muhammad Yunas in Bangladesh and India, finger-danced in Laos, worked with elephants in Thailand, buried a tribal elder in the Amazon, worked with ex-poachers on alternative income projects in Kenya, worked with lions and elephants in South Africa, and helped to set up a ground breaking jaguar research project in Costa Rica, where I lived for seven years. Then, two years ago, I moved to South Africa to take on the CEO role at GVI. In Costa Rica I married my Danish wife who I met in the Amazon, and had two boys: both blond haired Costa Rican beach rats. I now have a third boy, this time a South African, but have no plans for any more. I have no idea where we may move to next!

It played a central part in shaping me and setting the course for my life, giving me the passion I needed perhaps even the determination to succeed. I had always been an outside boy and loved the sea, but Plymouth really drove that passion forward. I did my boat driving whilst at Plymouth, and my commercial diving licence, and made lifelong friends that all inspired me in various different ways. I also have to add that some of the lecturers at Plymouth blew me away with their experience and knowledge.

I loved the region and I think anyone would be a fool not to study there if they have the chance. Plymouth offered some great practical experiences; for me, the diving opportunities were a great part of it, but also the international experience, such as going to Malta on a marine archaeological dive trip. The clubs are good, and the degrees respected. I also feel the University and the area creates a lot of passion and a united team. From what I can tell from those I know, Plymouth produced some really good, well-rounded people and, from the alumni with whom I am still in touch, all are doing well career wise.

Only to express my love for Plymouth! Outside of the lecture hall, I had an amazing time, one of the best of my life really, and I have so many fond and fun memories. I loved the city and the region and all it has to offer. If I ever moved back to the UK, it would be to Devon: the beaches, the moors, and the people make it a great place (one of the best to my mind)!

For more information about our range of marine science courses within the School of Biological and Marine Sciences, please visit the school page.