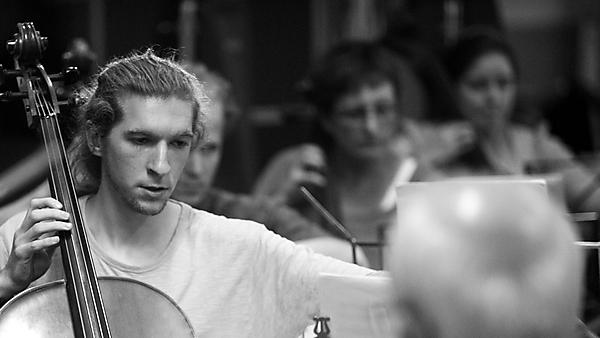 15/11 Ideologies of the First and Last Draft
Sam Richards (University of Plymouth)
"Go with the first thought" is a common idea in psychotherapy, automatic writing and musical improvisation. Why? The assumption is that the first utterance has a special significance. What are the sources of this idea which, incidentally, only arises in its modern form during the Industrial Age. Sam Richards will suggest some historical sources including references to mediumship, hypnosis, surrealism and beat poetry. We have long known that "free" improvisation could only be free if we could wipe our brains clean before every performance. But what is the ideology that holds it together? And how does that impact on how we play and teach improvisation?
30/10 Orchestral Work
10/1 Materials, Networks, Mimesis: Some perspectives on new 'nature music' for shakuhachi
Joe Browning (SOAS, University of London)

This paper presents one aspect of ongoing research into the significance of nature – as an idea and material entity - in the global shakuhachi (Japanese bamboo flute) scene. It uses case studies of three composers to explore music written for the shakuhachi around the turn of the millennium in the USA, focussing on compositions inspired in various ways by the natural world and inhabited by the sounds of landscapes, birds and other creatures. Drawing on the ideas of Michael Taussig and Georgina Born, I use ethnographic material to outline several interconnected arguments. I focus on the compositional process, as described by the composers themselves, including their accounts of how musical materials, instruments and technological processes can exceed their control and expectations. I argue that the act of composition is affiliative - creating new connections between entities including composers, instruments, various musical repertoires, natural phenomena, and technologies – and that all these entities exert a kind of social agency on each other. I also suggest that complex and multi-layered musical mimesis is at the heart of this affiliative dynamic. This includes not just the imitation of environmental sounds such as birdsong, but also the translation into sounEd of sights and movements related to natural phenomena, the transformation of musical material via technological processes, and the echoes in these new compositions of sounds and stories from the traditional shakuhachi repertoire.

These ideas suggest alternative perspectives on composition, emphasising the process rather than the finished piece, and foregrounding the network of entities involved, rather than placing the composer at the creative and analytical centre. And together they help to explain the role of new music in reworking traditional ideas about the naturalness of the shakuhachi, and its connections with Japanese landscapes, as the instrument travels around the world.

31/10 On Music and Collaboration: Sound Theatre and Inter-medial Performance

As an experienced composer/performer who has collaborated within many genres (including radio-phonic, music theatre and inter-medial), Dr Wilkins will address the issue of why this form of the creative process has assumed so much importance for some contemporary artists. Drawing on examples from recent works of Sound Theatre she examines what kind of processes can occur within different modes of cross-disciplinary collaboration, and what we can ultimately learn from this experience.

This paper explores the representation of history, multiculturalism and difference through flamenco in Andalusia. Flamenco is often linked to Andalusia’s Islamic and multicultural past. Some musicians mix flamenco with traditions from Islamic Spain that exist in North Africa (flamenco andalusí). Such collaborations attempt to bridge the divide between Spaniards and North-Africans, especially given a large number of North-African immigrants in Andalusia. I address the significance of a shared musical heritage in light of current debates regarding immigration and multiculturalism. On the one hand, the association between flamenco and Andalusia’s Islamic heritage consolidates regional identity but marginalises North-Africans in the representation of history. On the other hand, flamenco andalusí is a powerful vehicle for the expression of a shared cultural heritage.

The distinctive visual style of the graphic scores of the Viennese artist Anestis Logothetis (1921–1994) reflects not only a coherent artistic personality but also a consistent and at the time unconventional approaches to the matter of musical interpretation. This paper argues that it is this consistent interpretative aesthetic that has placed Logothetis’ work in an uncomfortable position in relation to the mainstream of Western Concert Music.
However, anecdotal evidence from uniquely twentieth-century genres such as rock music, jazz and noise art, alongside our changing relationship to electronic technology, suggests that Logothetis’ aesthetic revolution with the regard to the act of interpretation may be prescient, rather than eccentric.

13/2 Shakuhachi Collaborations with Contemporary Composers: A performer’s perspective
Dr Kiku Day (SOAS, University of London)
Kiku Day is a Shakuhachi player from Denmark with American, Russian, Japanese and Irish roots. She studied the traditional honkyoku repertoire with Okuda Atusya in Japan for 11 years.
Her research focuses on the development of the jinashi shakuhachi in the 20th century and the contemporary performance possibilities of this unique instrument. Several composers from different parts of the world have written for her, including Roxanna Panufnik, Vytautas Germanavicius, Gabriel Erkoreka, and Yumi Hara Cawkwell. She has performed with performers such as Fred Frith and Joëlle Léandre, and as a soloist with Odense Symphony Orchestra and with the Nonsuch Choirs at such venues as Purcell Room, Southbank Centre and St John’s, Smith Square.

The field of Artificial Life (A-Life) studies all phenomena characteristic of natural living systems, through computational modelling, wetware-hardware hybrids, and other artificial media. Its scope is rather large, ranging from the investigation of the emergence of cognitive processes in natural or artificial systems to the development of life or life-like properties from inorganic components. A number of musicians, in particular composers, have started to turn to A-Life for inspiration and working methodology. A number of techniques to compose music with the aid of computers have been developed based on, or inspired, by A-Life models. In this seminar, I will briefly review some of these techniques and then I will introduce my own work in this field. I will attempt to demonstrate why I find A-Life useful, inspiring and interesting for music composition. I shall focus particularly on a compositional method that I have developed using an A-Life modelling paradigm known as cellular automata.

27/11 The 'festivalisation' of music in the north of Ghana: Issues of power and culture
Trevor Wiggins (editor, Ethnomusicology Forum)

5/2 Proxemics and the sound-box: Analysing the Voice in Popular Music
Katherine Williams (University of Plymouth)

12/3 Variations on a Theme: A dialogue between composer and performer
Arthur Keegan-Bole (Bristol University)/Katherine Williams (University of Plymouth)
Arthur Keegan-Bole will discuss aspects of his work in progress, Variations on a Theme, for saxophones and electronics. The talk will focus on the influence of the performer Dr Katherine Williams (who will provide live examples and perform an extract of the work) and his response to the commission brief. The brief asked for a response to two strands of Dr Williams’ research: firstly, how jazz improvisations become fixed over time and secondly, the paradox inherent in producing recordings of improvisations.

The music explores aspects of Duke Ellington’s Diminuendo and Crescendo in Blue and uses open structures in both the saxophonist’s part and the electronics which become fixed by the performer over time. This allows for an unusual (and perhaps more-than-usually engaged) rehearsal process in which bespoke versions of the piece are formed.

Arthur Keegan-Bole is a composer in the final stages of a PhD at the University of Bristol. His output mostly consists of instrumental music including live electronics, further information and recordings at www.arthurkeeganbole.com

7/10 Keeping Themselves Alive: Queen’s Artistic Development in the 1970s
Nick Braae (University of Waikato, NZ)
Stemming from a study of British rock band Queen's output between 1973 and 1980, this paper traces the changes in Queen's music through this era with respect to the notion of musical development. I consider Queen's songs from three perspectives—style, the group's idiolect (or personal style), and the role of idiolect traits within songs. Each vantage point produces a different reading of Queen's career trajectory, and I thus further argue that the most appropriate reading of Queen's development is in terms of an 'expedition' narrative, which stems from the confluence of all three perspectives. Queen's musical development is thus not a singular path from one point to another, but rather a wide-ranging musical journey with the group's sonic imprint impressed on each stylistic turn.

11/11 Can the arts contribute to science and technology research?
Alexis Kirke (University of Plymouth)
When music, technology and science are brought together, it is usually as a method to communicate, sonify or demonstrate scientific and technical results; rather than for the music to directly contribute to the technological research. In this seminar, two examples are discussed where music is at the core of the technological and scientific investigation in which it is involved.

9/12 Punk Aesthetics in UK Hip-hop
Justin Williams (Bristol University)
Despite developing in multiple regions of the Anglophone world, punk rock music arguably has the strongest associations with (white) England and English popular music (e.g. Sex Pistols, The Clash), and its aesthetics have continued to pervade British popular music ever since. In a different generic realm, hip-hop aesthetics are rooted in African-American traditions but have now spread globally to create regional variants, performing their locality and difference in diverse ways. This paper looks at recent UK hip-hop artists that use punk aesthetics to carve a unique space to critique class, race and Britishness post-Empire. Using examples from the Sleaford Mods, Lady Sovereign and Lethal Bizzle, I seek to outline the intersection between hip-hop and punk aesthetics in UK hip-hop as complex negotiation of history, tradition and resistance.

3/2 Instrumental Gestures in Music Composition and Augmented Music Performance Federico Visi (University of Plymouth) Body movement and embodied knowledge play an important part in how we express and understand music. The gestures of a musician playing an instrument are part of a shared knowledge that contributes to musical expressivity by building expectations and influencing perception. In the last two decades, the study of music and gesture has been subject to increasing cross-disciplinary interests, moving away from a primarily musicological context and engaging multiple fields of research – including cognitive psychology and human-computer interaction. During this talk, I will present quantitative and qualitative approaches to the study of body movement in performances with musical instruments, outlining techniques for the analysis of different types of motion data. In addition, I will show some practice-based research projects where the design of interactive music systems is led by the assumption that gesture is not a mere means of controlling audio parameters, but, rather, is an active constituent of embodied musical meaning.

2/3 ‘I didn’t quite catch your accent’: A recording analysis of accentuation in Astor Piazzolla’s Etude 6 for Solo Flute (1987) for a fresh approach to tango performance Dr Jessica Quiñones (University of Huddersfield). Despite the fact that Argentinean composer Astor Piazzolla (1921–1992) chose to use a rather normative form of accent notation within his published tango music, the language surrounding tango performance seems to indicate that there is a ‘correct’ way to interpret the accent (and the ‘swing’ it is often partnered with) that is not naturally implied in the score – that is, unless one has ‘insider’ knowledge about the genre. This paper presents an overview of the methodology used to explore the accent symbol and its differences that are said to exist between the stylistic traditions of both classical and tango accentuation in the context of Piazzolla’s 6 Tango-Etudes for Solo Flute (1987). A recording analysis of ‘non-tango’ flute players playing an excerpt of this work was made using Sonic Visualiser software. Differences in accentuation style were noted in comparison to Piazzolla’s own accentuation techniques on his bandoneón, as well as those by the author, and tango musicians Fain and Gallo. In a move away from fixed ‘either/or’ dichotomies to indicate a correct way of performing the accents, the ‘and/and’ model is introduced to explore how tango notation feeds into wider concepts of the acento largo and ‘tango swing’, which function on macro- and micro-levels for understanding the numerous creative possibilities for future tango performances.